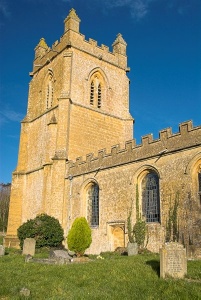 The Guitings
There are two Guitings within a few miles of each other. The larger is Guiting Power, and this, Temple Guiting, which acquired its distinguishing prefix in the 12th century when the manor was owned by the Knights Templar. The manor itself is one of the best examples of Tudor architecture in the Cotswolds, and is well worth visiting on one of the open garden days in the summer months.

St Mary's church stands on a rise of level ground at the south end of the village, and looks out over the valley floor and the River Windrush. The view from the churchyard must be one of the most idyllic in the Cotswolds.

St Mary's Church
The church creates a rather odd impression at first glance. The eastern end, with the chancel, is decidedly medieval, but the remodeled west end is built in Georgian classical style, with high, rounded windows. The result is not unpleasant, just a bit unusual. The interior is very well lit, thanks in no small measure to those Georgian windows. The man responsible for the remodeling of St Mary's was Rev. George Talbot, whose memorial and those of his family can be found in the church. 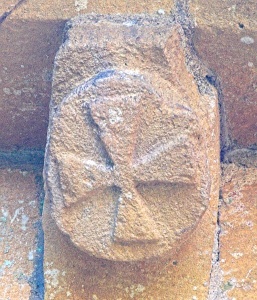 A Templar Cross, reminder that the
village was named for
the Knights Templar

Stained Glass
What is the connection between a small Cotswold church and a famous American museum? Read on ...

In the nave are three stained glass panels dating from the later 15th or early 16th centuries. There were originally 12 such panels, but the other nine were sold by the Talbot family to a London dealer for the un-princely sum of £5. They eventually made their way to America and are now on display at the Metropolitan Museum of Art in New York.

Georgian Decalogue
The most striking feature of the interior is a Georgian decalogue over the north door. This is an ornately painted set of wooden panels representing the Ten Commandments, Creed and the Lord's Prayer. The decalogue was created in 1748 and lay forgotten for over a century before it was restored in 2004 with funding through the Heritage Lottery Fund.

The Corbel Table Gargoyles
The chief feature of interest for visitors to St Mary's will be the beautifully carved heads that adorn the corbel table around the exterior of the chancel. A corbel table is a series of small corbels placed just below the roof line. Here the stone masons have done a superb job creating figures of beasts both real and fanciful, religious figures, and human likenesses. It is hard not to compare the figures at Temple Guiting with the wonderful carved heads at Kilpeck in Herefordshire. See our photo gallery for a photo of each of the corbels in order.

Getting there
Temple Guiting is located just off the B4077 about 5 miles west of Stow on the Wold. The church is at the southern edge of the village, and offers limited parking on the verge. 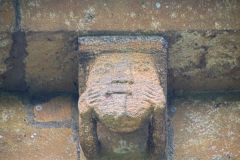 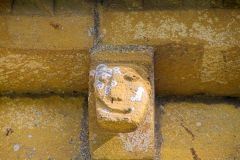 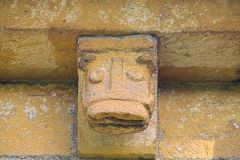 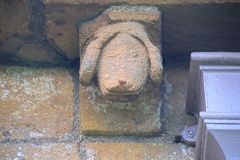 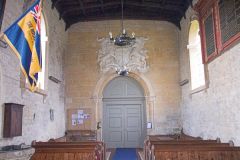 More self catering near Temple Guiting