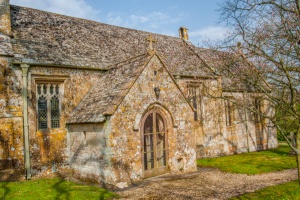 The church of St Bartholomew stands below the manor house in an idyllic Cotswold hamlet a few miles west of Bourton-on-the-Water. The church is essentially Norman, with 13th and 14th-century rebuilding and a major Victorian restoration by JEK Cutts. The Norman arcade, with its wonderful scalloped capitals, still survives.

Of the early rectors, one stands out; John of Windsor was named rector in 1284, but in 1294 he was held in the Tower of London on a charge of felony. Not, perhaps, the best appointment to the post, then.

The most interesting historic feature of St Bartholomew is a Saxon carving of the Crucifixion, set into a niche on the exterior of the east wall. The niche is almost certainly 15th century, but the Crucifixion scene must be at least 10th century if not earlier. 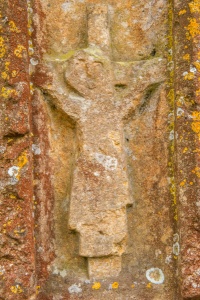 Immediately inside the south doorway is a Norman font in a simple tub style, with cable moulding around the rim. The pews on the south side of the nave are 17th century, with very nicely carved foliage on the backs of several pews. There is an oak chair also dating to the 17th century in the sanctuary.

In the north transept are two very worn effigies of priests. These once stood near the yew tree in the churchyard, but were brought indoors to protect them from further weathering. The church guide suggests that one of the effigies may be that of the last Abbot of Gloucester, brought to Notgrove at the Dissolution of the Monasteries. That seems somewhat unlikely, for the style of the effigies is 14th century.

The most intriguing interior feature is not obvious at first glance. Behind the altar is a colourful 20th-century tapestry, designed by Colin Anderson. This hides a defaced 14th-century reredos, with a canopied niche flanked by arched recesses. There are heavy traces of colourful medieval paint on the niches, mainly green and dark red. 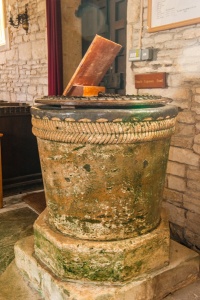 The tapestry is meant to be rolled out of the way with a pulley mechanism so you can see the reredos, but when we visited the pulley system looked like it had not been used in years, and any attempt to raise the tapestry was met with a protesting squeal of metal cable, and the distinct impression that the whole mechanism was about to collapse. So we resorted to twitching aside the tapestry and peering behind it to get a sense of the medieval carving and painting.

On the south wall of the chancel, in front of the communion rail, is a wonderful tiered tomb to members of the Whittington family, who lived at the nearby manor house. The family coat of arms decorates the top of the tomb, while the bottom 'shelf' holds the effigy of a civilian in long fur-lined robes and a wide collar. Above him is a beautifully carved effigy of a knight in armour, dated to around 1585.

The detail of the armour and sword carving is exquisite. A female member of the Whittingtons is represented by a third effigy on the north sanctuary wall. Here there is a niche with an altar tomb set within it, and on the tomb a beautifully carved effigy of a woman wearing a headdress and Elizabethan ruff. The base of the tomb is carved with the date 1630.

Immediately beside the tomb recess is a canopied 14th-century niche, medieval paint still clinging to the back of the niche.

In the small vestry, off the transept, is a wonderful piece of stained glass depicting the Virgin and Child. This dates to about 1300 AD and is in exceptional condition. There is very good Victorian glass in the south nave and south chancel windows by the famous London firm of Clayton and Bell. The chancel screen is mostly Victorian, but it incorporates pieces of medieval woodwork.

St Bartholomew's church is a gem; a wonderful country church with some extremely interesting historical features. The setting alone is exceptional; its the sort of place where time seems to stand still, where lives meanders on as it has done for century after century. 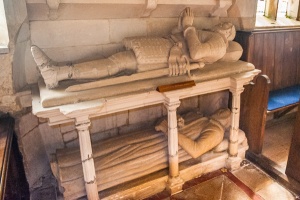 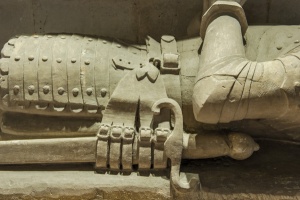 Detail of the swordbelt, 1585 effigy 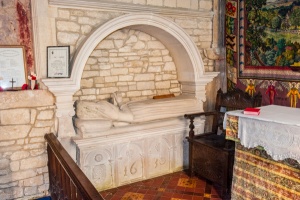 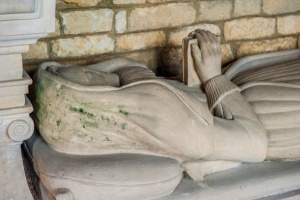 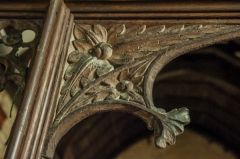 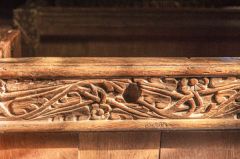 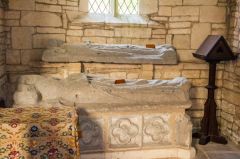 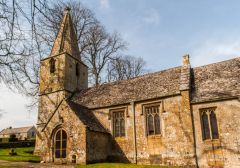 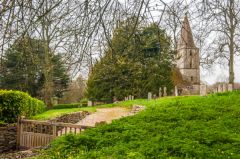