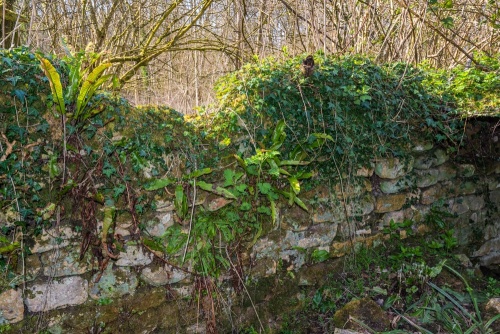 If ever a historic attraction qualifies as 'hidden', it is the Spoonley Wood Roman Villa. The overgrown villa remains are set in a small woods, reached by an unsigned path across fields, within the Sudeley Castle grounds, just outside Winchcombe, Gloucestershire.

The villa was built near the confluence of two small streams that run into Beesmoor Brook in the valley bottom, 1km further west.

It began as a corridor villa and was later extended with the addition of two wings. This winged villa, in turn, was extended with a final side to create a courtyard villa. A stone's throw away from the villa is a simple building thought to have been a granary or barn. The courtyard villa measures 51m x 61m (170 x 190 feet). 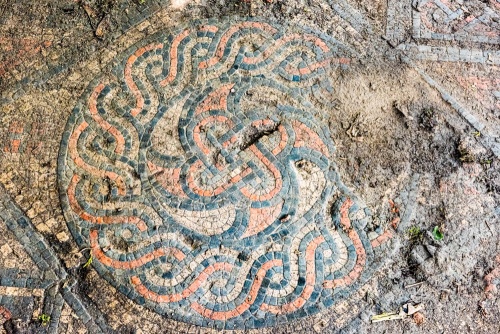 Part of the reconstructed mosaic

Stones were first found in Spoonley Wood in 1877, but it wasn't until five years later in 1882 that workmen searching for building stones in the wood stumbled upon the villa, unearthing several rooms with Roman mosaics.

The owner of Sudeley Castle at that time was Emma Dent, and Mrs Dent had one of the mosaics disassembled and moved to the castle where it was reassembled. Mrs Dent then called in two prominent Victorian antiquarians, John Henry Middleton and William Bazeley, to excavate the villa.

Most of these artefacts are kept at Sudeley Castle, though a marble statue of Bacchus, found in a grave at Spoonley, is now in the British Museum in London. The base of a Roman column is in the Gloucester Museum and three pottery lamps are on display at the Cheltenham Museum. 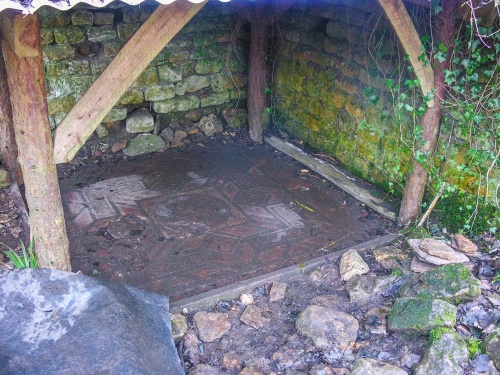 The mosaic is protected by a lean-to shed

Unfortunately, this investigation exposed the Roman remains to the effects of frost and visitors began to explore the site, causing further damage. Mrs Dent decided to rebuild several of the villa walls up to 1.8m high (roughly 4 feet). She also had two of the better mosaics reconstructed and protected from the weather under wooden sheds.

Also unfortunately, no other steps were taken to protect the site, and by the 1970s the sheds had collapsed and trees and shrubs had overrun the site.

One shed has been rebuilt and given a corrugated iron roof. Under this shed is a partial mosaic, further protected by a plastic sheet held in place with stones.

There are no visitor facilities at Spoonley Wood. In fact, there is no information panel or any indication that the villa or the mosaics exist. The villa is lost beneath decades of undergrowth, with only scattered stones visible.

That said, it is an evocative site, if a slightly sad one. The mosaic is well worth seeing, and it is fascinating to wonder what life was like for the villa inhabitants. The mosaic is entirely geometrical, with no discernable depictions of humans or animals. When we visited, it was damp and muddy in places where water had gotten under the plastic sheet that was meant to protect it. 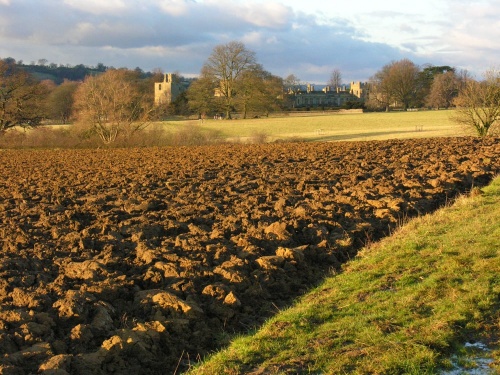 The path to Spoonley Wood goes past Sudeley Castle

Be aware that there are no signposts to the villa! An Ordnance Survey map is a big plus (Outdoor Leisure 45 or Landranger 163), but I'll describe the route in detail.

Start at the public car park on Back Lane (alternatively at the main Sudeley Castle car park). From the car park take Cowl Lane down to High Street and turn right. Turn left onto Vineyard Street and go over the bridge across the River Isbourne. The road will bend to your right but go straight on, entering the Sudeley Castle grounds. You are now on the Warden's Way long-distance footpath.

You will see the castle gatehouse ahead of you. The road passes to the right of the gatehouse and leads down a long slope to a Palladian bridge across Beesmoor Brook. 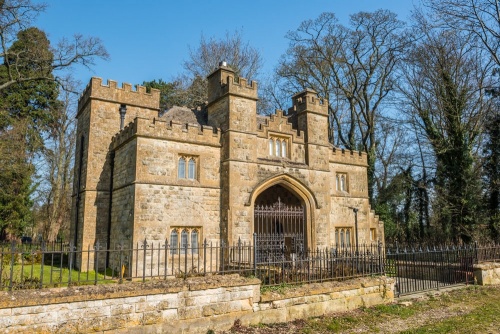 Pass to the right of the castle gatehouse 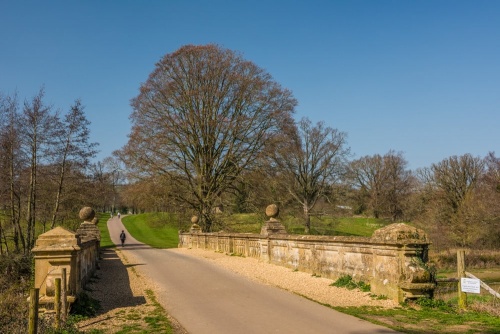 The bridge across Beesmoor Brook

Just before the road reaches the castle wall you will see a gate on the right, signposted for the Warden's Way. Go through the gate, into the open field beyond. 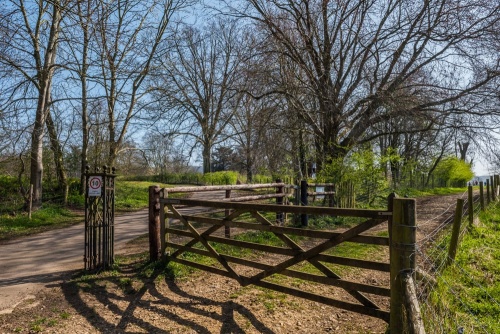 Take the gate into the castle grounds 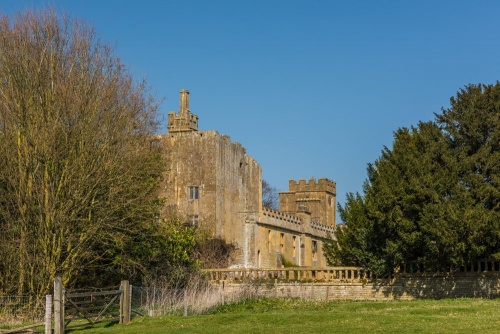 Sudeley Castle is to your left

Keeping the castle wall on your left, follow the Warden's Way signposts as they lead straight on across the field. The path isn't easily seen at this point, so just keep your eye out for the signposts. 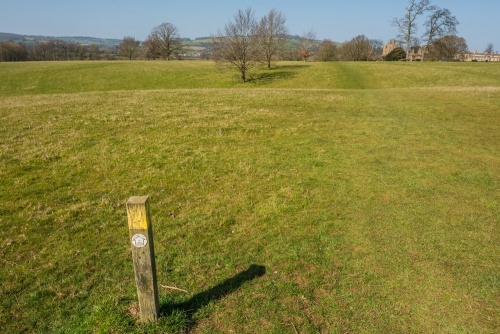 Look for the Warden's Way signposts

At the far end of the field, you go across a footbridge. Here, the Warden's Way turns left along the field boundary, through a gap in the hedge, but you want to carry straight on, keeping the hedge to your left and climbing up the hill. 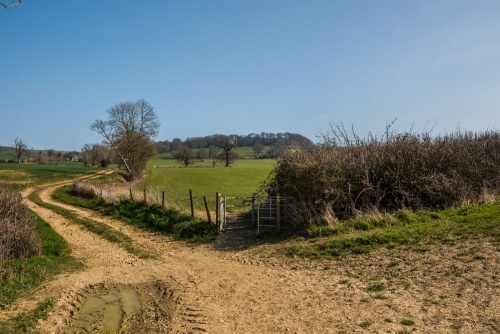 Turn off the Warden's Way, by the hedge

The trail climbs and crosses another field boundary to emerge onto a farm track. 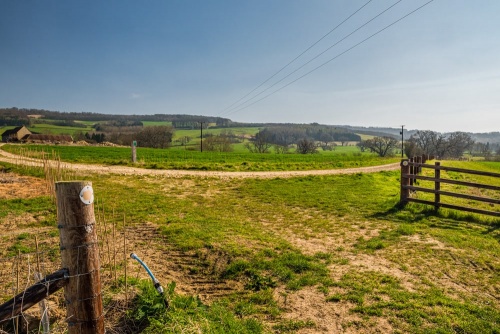 Turn right onto the farm track

Keep going straight, with the farm buildings away on your left. You pass a reservoir down the slope to your right, and the track dips down to a bridge across a small brook. 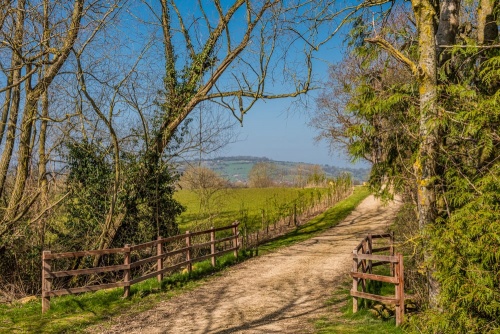 The farm track crosses a bridge

Just past the bridge, the track bends left, but you want to take the footpath that leads at an angle to the right, across the open farm field ahead. 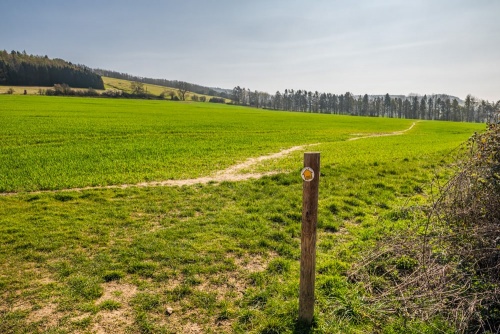 The trail leads across two fields, then skirts a band of trees before entering Spoonley Wood at a kissing gate. 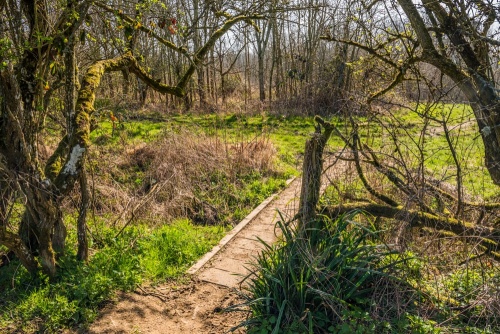 Here's a tricky bit; immediately upon entering the woodland, the wide trail bends right. Don't take this bend! Instead, carry straight on. 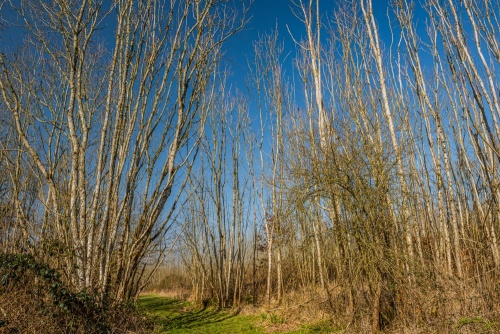 The trail goes through a muddy patch before dipping down to a footbridge over a stream.

On the far side of the bridge the trail rises again. At the top of the rise, you will see a trail off to your right. This is where it is easy to get lost, simply because the villa is so overgrown. From the fork in the path you should be able to see the moss-covered corrugated roof of the shelter that protects the Roman mosaic. 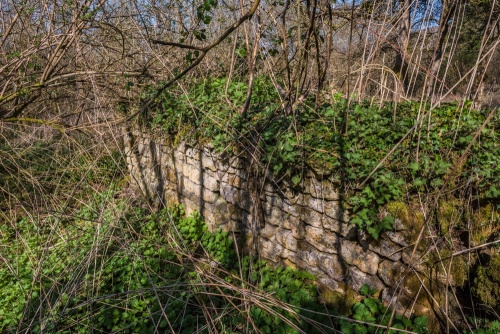 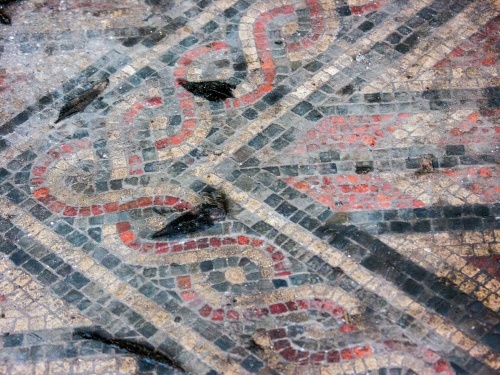 When we visited, this was in poor condition, and so collapsed that we wondered if it was the right place.

The Spoonley Wood walk takes roughly 5 miles (8km) from the Back Lane car park and should take no more than 3 hours for a return trip. As we discovered, it makes for a lovely family outing.