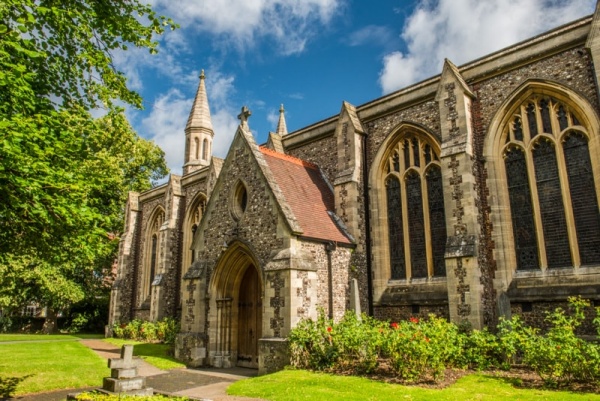 St Albans is blessed with three Saxon churches, built on the instigation of the 6th abbot of St Albans in AD 948. Two, St Stephen and St Michael, stand south of the River Ver. The third, St Peter, is in the heart of the city, a short stroll north from the Cathedral.

The church maintained close links to the Abbey throughout the medieval period. In 1252 the Abbot built a vicarage and the Abbey infirmarer served as rector of St Peter's. The rector was required to use his revenue to supply wine daily to the Abbey monks and he was fined 8s every day if he failed.

In the 14th century a man named Roger de Stoke erected a cross in the churchyard on the site where he wished to be buried. When miracles were reported at the cross pilgrims began to visit, leaving offerings. The rector and the vicar then squabbled over who had the right to keep the offerings. 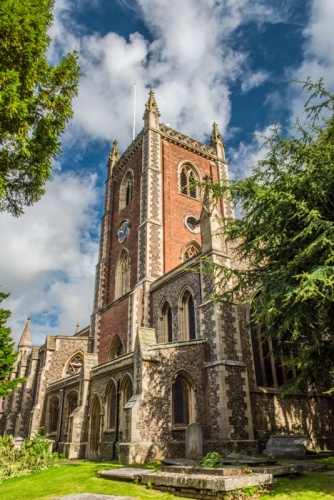 The church and 1801 brick tower

In 1426 the Abbot learned that certain locals were suspected of supporting the Lollard heresy. He held a synod at St Peter's and ordered the suspects to be brought before him. Those who confessed the error of their ways were given penance and their heretical books were burnt. Around the same time, the Bishop of Lincoln appeared, drawn by the rumours of heresy. He found nothing amiss and had to content himself with preaching a sermon warning the parishioners against Lollardry.

No trace now remains of the original 10th-century church. The church was comprehensively rebuilt in the 13th century. The brick-built tower dates to 1801-3, replacing a medieval tower that had grown unsafe. The seven-bay nave is 15th-century work.

A 19th-century restoration by Lord Grimsthorpe swept away many of the medieval furnishings. One survivor was an organ case dating to 1723. In the vestry is a funeral helm dating to the 16th century. Fragments of medieval stained glass have been gathered together in the windows of the north aisle.

In the north aisle is a marble monument to Edward Strong (d 1723). Strong served for many years as the chief mason to Sir Christopher Wren. Strong is thought to be responsible for Romeland House, opposite the Abbey Gatehouse, and Ivy House, opposite St Peter's churchyard. 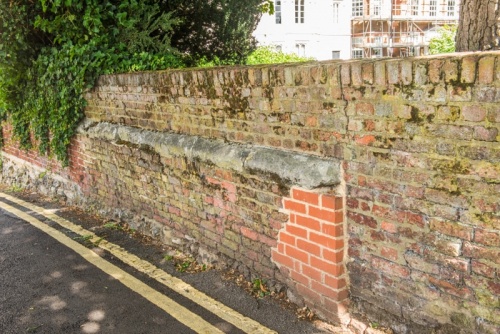 Site of the 15th-century Charnel Chapel

From at least the 13th century, St Peter's had a resident anchoress; a religious hermit who lived in a walled-up cell attached to the east end of the church where a small squint gave her a view of the high altar during services.

In 1258 the resident anchoress reported a vision of an old man with a long beard at the top of the tower, crying out 'Woe to all the inhabitants of the earth'. The anchoress then predicted that a famine would occur, and it did. There are no obvious remains of the anchoress' cell, but it must have stood close to the information panel at the south-east corner of the church.

Where the churchyard wall meets St Peter's Street is the site of a medieval charnel chapel built by the Guild of All Saints in the early 15th century. The Guild paid for a chaplain to say masses for living and deceased guild members. You can see traces of the medieval stonework on the exterior of the churchyard wall. 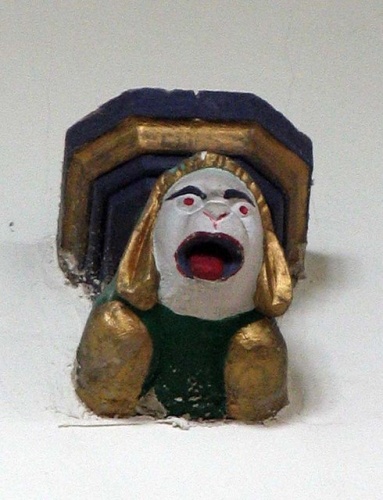 Inside the south porch is a medieval memorial brass that has been turned over and re-inscribed to Roger Pemberton (d 1627), High Sheriff of Hertfordshire in 1620. Pemberton built the almshouses opposite the churchyard on St Peter's Street.

Near the south-east corner of the church is the grave of Dr Nathaniel Cotton (d 1788), a poet and a pioneer in the treatment of mental illness. Cotton founded an asylum for mentally disturbed patients on College Street, near the Cathedral. In 1763 one of his patients was the poet William Cowper, who came to Cotton suffering from depression.

Sir Richard Lee was a military engineer and a favourite of King Henry VIII. When the king suppressed Sopwell Priory in St Albans he granted the monastery site to Lee, who promptly tore down the buildings and used the stone to build an opulent Tudor manor on the site. His grave is near the east end of the church.

St Peter's is very easy to reach from the centre of St Albans. From the market place just follow St Peter's Street north to the churchyard, a walk of no more than 5 minutes. Be aware that the church has limited opening hours.

The image of the medieval corbel head is (c) John Salmon, republished with gratitude under a Creative Commons license.