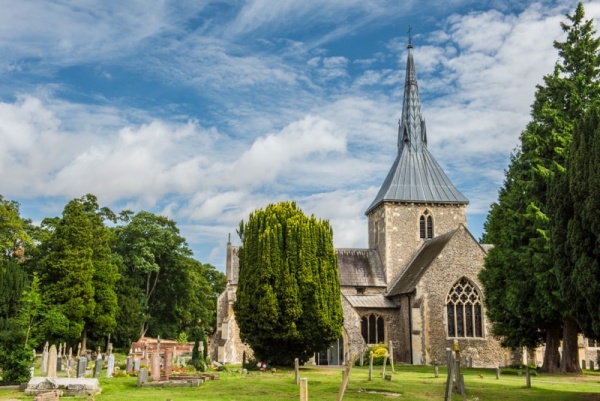 St Helen's Church in Wheathampstead is one of the few Hertfordshire churches that can boast Saxon origins. Unfortunately, no trace of that original timber church remains and most of the large building we see today dates to the 13th century.

The chancel was rebuilt and extended in 1238 after the Saxon church had become ruinous. Features from that 1238 rebuilding include the triple lancet east window and the window and priest's doorway in the north chancel wall. Look for the traditional Norman dogtooth decorative carving around the doorway.

The striking west tower came slightly later; it was built around 1290. Records show that an indulgence of 20 days was granted to anyone making a contribution towards the cost of the tower. The tower is topped with a 19th-century spire built to resemble an earlier medieval version. 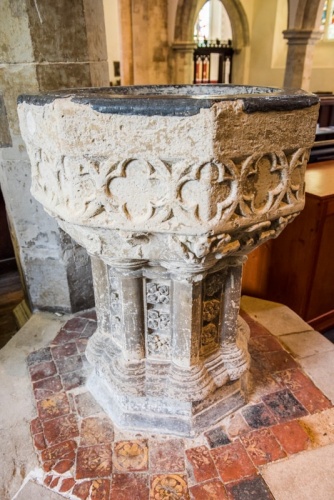 The nave was rebuilt and the south aisle added in the 14th century, followed by the north aisle and Lamer Chapel.

The church is built of flint rubble and Totternhoe stone, faced with limestone and flint.

One of the interior highlights is a statue of the Antarctic explorer Apsley Cherry-Garrard, whose tomb is in the north-west corner of the churchyard. Cherry-Garrard owned the Lamer Park estate just outside the village. He took part in Robert Falcon Scott's ill-fated attempt to reach the South Pole in 1911 and later recounted the journey in his memoirs, entitled 'The Worst Journey in the World'.

Other highlights include an octagonal 14th-century font and memorials to numerous local families. Among the memorials is a brass to Hugh and Margaret Bostock. Their son John of Wheathampstead became Abbot of St Albans from 1420-1440 and 1451-1465.

The Bostock's brass is dated 1450, and bears an epitaph said to have been written by Abbot John; 'Pastoris, pecoram prothomartiris angligenorum', which translates as 'Shepherd of the flocks of the first martyr of the English'. 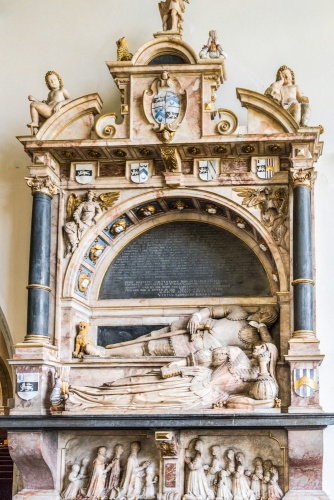 'Here lie the father, mother, sister, and brother of the pastor of the flock of the Eglish protomartyr. His father Hugh Bostock and his mother Margaret Macry. His name was the same, the son derives it from the father. Whoever thou art who passest by, whether man, woman, or child, pray (pecare) that, as they lie together, so they may rest in peace.'

A century later is an alabaster tomb chest to Sir John Brocket and his wife Margaret (c. 1558). The Brocket's lived at Wheathampstead Place, just across the river from the churchyard. Around the tomb are figures representing the couple's children. Interestingly, the children's figures are representative only, as the couple had 10 children but only three male and three female figures are shown.

Also, look for a large marble monument in the north transept to Sir John Garrard (d 1637). With Sir John's reclining effigy is another effigy representing his first wife Elizabeth who died in 1632 at the age of 39, having given birth to 14 children in 21 years of marriage. Elizabeth was the daughter of Sir Edward Barkham, a Lord Mayor of London. Beside this is a tablet commemorating a later Sir John Garrard (d 1700).

At the entrance to the north transept is a beautifully carved Jacobean screen, all that remains of an earlier west gallery. The pulpit is also Jacobean and features lovely strapwork decorative carving.

In the north transept (also known as the Lamer Chapel) is a richly carved medieval reredos, possibly given by the wealthy Macry family, whose leopard's head emblem appears amidst the carvings. The reredos dates to sometime around 1330 and was never finished. 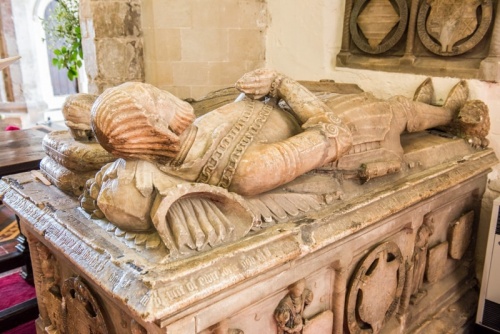 The Macry's leopard's head symbol also appears on the font and on the canopy of the late-medieval piscina in the chancel.

The reredos features seven canopied niches embellished with carved foliage and crockets. It was discovered walled up during church repairs in 1865. Presumably, it had been hidden at the Reformation to prevent its destruction.

On the east wall of the north transept is an early 19th-century monument to Charles and Anne Drake-Garrard, carved by the Danish sculptor Bertel Thorwaldsen. also on the east wall is a poignant white alabaster tablet to John Heyworth, who died on Christmas Day 1558. Also commemorated is John's wife Joan and their three children, all of whom died in infancy.

In the south transept is a fragment of a canopied structure probably made to house a statue of St Katherine.

St Helen's is a fascinating church to explore, especially for its wealth of historical monument. The church does not have dedicated parking but there is a free village car park on East Lane, a few minutes stroll away. 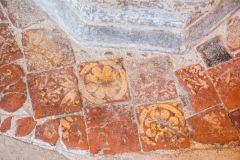 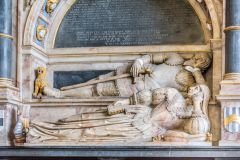