Bourton on the Water, Gloucestershire 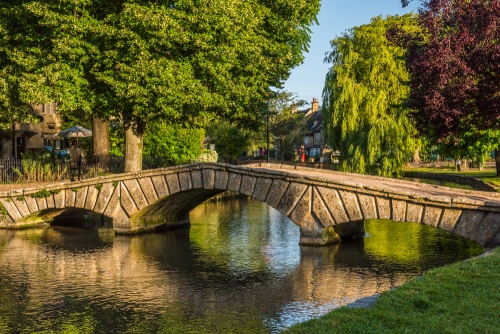 Footbridge across the River Windrush in Bourton-on-the-Water

Bourton on the Water is a classic Cotswold beauty spot. The River Windrush flows through the centre of this lovely village. The Windrush at this point is a peaceful waterway, scarcely more than a shallow brook flowing at a gentle pace. It is spanned by a series of very low stone pedestrian bridges.

The name Bourton comes from a combination of the Saxon words burh and ton, so the village is literally the 'settlement beside the camp'. There was certainly a camp, or fortified settlement here as early as the Stone Age, and the Romans built a camp on the west side of the current village.

The parish church of St Lawrence stands on the site of a Roman temple. There was a Saxon timber church here from at least AD 708, and this was replaced with a stone Norman church in 1110. The current church is a rather peculiar mix of a 14th-century chancel joined to a Victorian nave, under a striking Georgian tower. 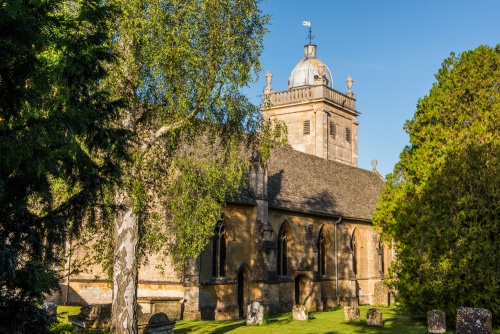 It is the combination of the River Windrush and the footbridges across it that have led to Bourton's nickname, 'The Venice of the Cotswolds', though unlike Venice there is just one waterway! There are five bridges. The oldest is Mill Bridge, at the western end of the village green, near the war memorial. This was built in 1654.

The long and wide village green stretches away from the river, offering a popular place for visitors to relax and enjoy a picnic while watching ducks float past along the river.

From the green, a footpath leads beside the river to one of Bourton's most popular attractions, Birdland, home to a wide variety of birds from around the world. Over 50 themed habitat areas laid out in gardens beside the river are home to flamingos, pelicans, cranes, storks, owls, parrots, hornbills, ostriches, birds of prey, and penguins, to name just a few. You can see birds being fed, listen to a regular lecture about your favourite species, and have a 'close encounter' session in company with an experienced keeper. 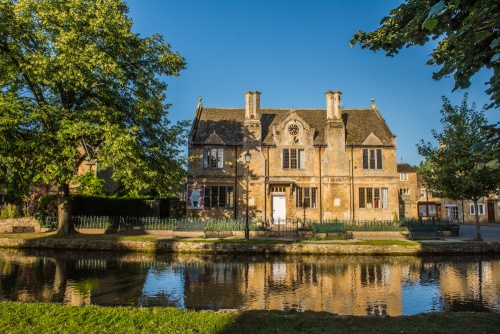 The River Windrush in Bourton-on-the-Water

Near the entrance to Birdland, directly beside the large visitor parking area on Rissington Road, is the Dragonfly Maze, a popular hedge maze created by Kit Williams, who famously also created the 'Masquerade' book and treasure hunt. Not only do you have to navigate your way to the centre of the maze, but pick up clues along the way to solve a tricky puzzle. We've taken the challenge as a family, and found it great fun!

At the corner of Rissington Road and Station Road stands the Old New Inn, a beautiful hotel and pub. The inn is new no longer; it dates to 1712. Behind the New Inn is another popular visitor attraction; a model village, recreating the entire village of Bourton in miniature one-ninth scale, down the most accurate detail. The model village took 5 years to build and was opened on Coronation Day, 1937.

At the far end of the village green, near the large war memorial, is the Cotswold Motor Museum, featuring historic vehicles from the early 20th century, including vintage and classic automobiles, motorcycles, and caravans. see displays of original enamel signs and a vast array of motoring collectables. The museum is housed in the former blacksmith shop used by the Alldays firm from the 1770s.

See a recreation of an early garage operated by Jack Lake, Bourton's first mechanic. There is a programme of 'guest' vehicles, with past guests including James Hunt's F1 car, and the model for Wallace and Gromit's vehicle in 'The Revenge of the Were-rabbit'. 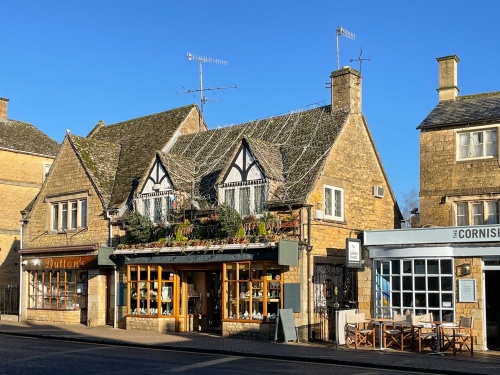 Many of the shops that line the High Street date to the 18th and 19th centuries and most are built of the local golden-coloured Cotswold stone, which gives a wonderful warm glow, especially in sunlight. If you walk along the High Street, past the green, the domed Georgian tower of St Lawrence parish church comes into view.

Opposite the church is Bourton Manor, visited by Charles I on several occasions. Bourton's vicar was Thomas Temple, who also served as a chaplain for the royal household and as a tutor to the king's children. The future Charles II came here in 1644, at the height of the Civil War, and stayed at the manor while his soldiers camped where the Cotswold School's playing fields now stand.

A short walk down the High Street from the churchyard brings you to The Mousetrap, a traditional 18th-century inn with blackened beams in the bar. This is famously the only pub in Britain named The Mousetrap. Local tradition has it that novelist Agatha Christie once visited the inn. Christie, of course, authored 'Mousetrap', a play which has been running continuously in London since 1952.

Just west of Bourton runs the A429, which follows the course of the Roman Fosse Way. Most local people simply call it 'The Fosse'. Between the Fosse Way and the village lies Salmonsbury Meadows, a 44-acre nature reserve and Site of Special Scientific Interest run by the Gloucestershire Wildlife Trust.

Within the Meadows are the remains of Salmonsbury Camp, an Iron Age earthwork enclosure with evidence of occupation as early as the Neolithic period. A hoard of Iron Age currency bars was unearthed here in 1860 and Saxon burials have been found on the line of the earthwork defences and inside the enclosure.

Across the Fosse, and reachable by public footpaths, are the beautiful villages of Lower Slaughter and Upper Slaughter. 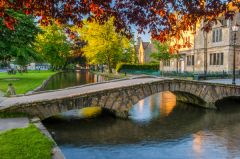 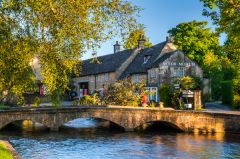 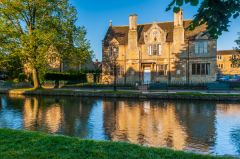 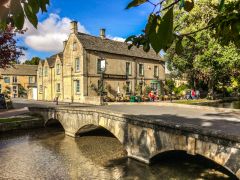 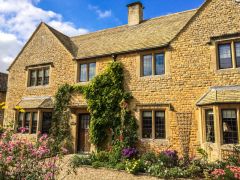 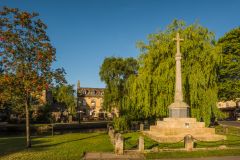 Nearest Accommodation to Bourton on the Water:

More self catering near Bourton on the Water >>

More Hotels near Bourton on the Water >>

More bed and breakfasts near Bourton on the Water >>