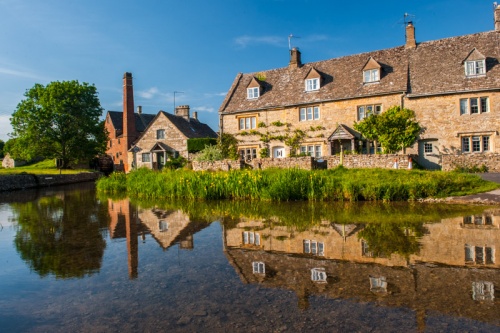 A classic Cotswold village, with lovely cottages of Cotswold stone beside the sleepy River Eye.

Lower Slaughter has been called the most beautiful village in England. While that assessment is certainly open to debate, there's no questioning the quiet beauty of this small Cotswold village near Bourton on the Water.

Every guidebook or tourist brochure on the Cotswolds that I've ever read featured Lower Slaughter, usually with the words 'beauty spot' and 'picturesque' attached. Well, it's true. The village truly is a beauty spot, and my goodness, it is picturesque.

You might think, given this publicity, that it would be overwhelmed with tourists, at least in the summer months. Blessedly, it has remained unspoiled and free from the hordes of tour buses that descend like swarms on the neighbouring village of Bourton on the Water. Part of this tranquillity has to do with the narrow lanes leading to the village, which help keep out large vehicles. 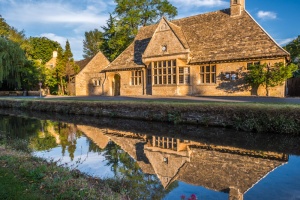 The name of the village may seem disconcerting at first; it has nothing to do with death but is a modern mangling of the old English for "slough". The only "attraction" in Lower Slaughter is the Old Mill, with its restored water wheel and distinctive red-brick tower.

The Mill now houses a tea shop, a small store, and a museum. As our daughter can attest, it also sells ice cream in summer. The mill, though it looks ancient, actually dates to the 19th century, and remained in use until 1958.

The real attraction of Lower Slaughter is the village itself, with cottages of Cotswold stone beside the slow-moving River Eye, really no more than a stream, crossed by two narrow footbridges.

Across the lane from the river, half-hidden by a stone wall, is Lower Slaughter Manor, a 17th-century manor house, possibly incorporating bits of a medieval nunnery.

The house was built for the Whitmore family, lords of the manor at Lower Slaughter from 1611. In the grounds is a 16th-century double dovecot thought to be the largest in Gloucestershire. The manor is now a luxury hotel. 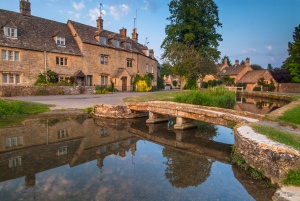 Footbridges across the River Eye

Almost directly opposite the manor, by a small bridge across the river, is Slaughters Inn, formerly Washbourne Court, a lovely 17th century complex of buildings with a wide lawn running down to the river. This is a popular place among locals for Sunday brunch on the lawn. The Inn was once a grammar school associated with Eton College.

A few paces along the road from the Inn is the Victorian village hall, a regular venue for shows by local artists. In fact, the first time I came here, years ago, on a bicycle trip with my wife, there was a show on. We leaned our bicycles against the wall outside, and enjoyed a lovely break enjoying paintings we couldn't afford!

The hall was designed by Thomas Colcutt in 1887 as a reading room but is now the hall and multi-purpose venue. The hall cost £516 to build, with the cost raised by public subscription plus a donation of £100 by the lord of the manor, Charles Whitmore, who also donated the land to build on.

The reading room opened in 1888 and remained in use until the 1920s when it became the village hall. Admission was only open to men and youths, who paid a monthly subscription of 2d.

The church, dedicated to St Mary, is lovely - there's that word again - with a tall spire. Though the current building owes much to a Victorian restoration in 1867 by architect Benjamin Ferrey, the history of the building goes back to the 13th century, and the nave arcade has survived from that medieval church.

I have visited Lower Slaughter many, many times and always left with a sense of peace. This is truly a beautiful little village.

Come at the evening of a long summer's day, and watch the golden sunlight strike the Cotswold stone cottages and reflect off the placid waters of the gently moving River Eye, and see if you don't agree. Certainly, the users of Google Street View agree, for in 2011 Copse Hill in Lower Slaughter was named the Most Romantic Street in Britain in a user poll. 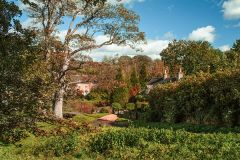 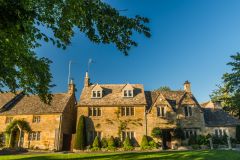 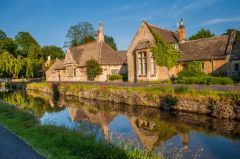 More self catering near Lower Slaughter

Self Catering near Lower Slaughter