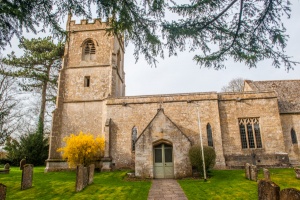 The village of Cold Aston stands in peaceful countryside a few miles west of Bourton-on-the-Water and the Roman Fosse Way. The centre of the village is a wide green ringed by honey-coloured Cotswold stone cottages, a small school, and a friendly pub. Beside the school, set back from the road, is St Andrew's church., approached by a shaded path that passes a yew tree thought to be over 600 years old.

This attractive building dates to the 12th century, though the first written record comes from 1220. Sometime in the late 13th century, the church was appropriated to Little Malvern Priory in Worcestershire, and the priory retained the living until the Dissolution of the Monasteries.

The oldest part of the church is the nave and chancel, both 12th century. The south doorway is Norman, with three very simple orders of moulding framing a diapered tympanum above a lintel carved with flowing foliage.

There is a worn Norman tympanum over the blocked north doorway (walk around the outside of the church to find it). There is also a blocked 12th-century window in the north chancel wall. The inner face of the window, in the chancel, has been inset with a 14th-century statue niche, later used as an Easter Sepulchre. Also in the chancel is a 13th-century pillar piscina and a very nicely canopied credence shelf set into the south-east window splay. 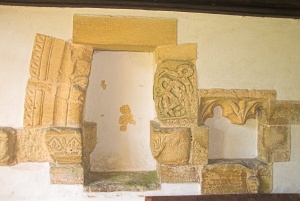 However, the most interesting feature in the chancel is the remains of a 14th-century reredos, including a pair of canopied statue niches) now empty). The niches are joined by a simple, decorative string course. Unusually, there is no east window at all. In the north wall is an aumbry in the same canopied style as the state niches, suggesting it was added at the same time.

In 1876 a major restoration took place, and large 15th-century style windows were inserted in the nave. During building work, several fragments of intricately carved stones were discovered, including a piece of a Saxon cross shaft and a small human head.

The Saxon carving suggests that there was a church here long before the current building was erected, though of course the cross could simply have marked the site of an outdoor gathering place for preaching, rather than an actual church building. These carvings have now been set into the west wall of the porch.

There are several interesting wall monuments in the nave. The largest and most ornate is a rather wonderful memorial to Giles Carter (d. 1665), all gilding and heraldic symbols, with cherubic angels blowing their horns and cascades of fruit and foliage framing an inscribed tablet.

Much more restrained by comparison is a tablet against the tower wall to Samuel Elliot, rector until his death in 1667. Compare this gilded memorial with the extremely simple brass plaque beneath it, commemorating John James, a later vicar, who died in 1800. From these plaques look up at the wonderful tiercone vaulting supporting the 15th century tower, resting on carved heads of angels.

A Saxon Church?
Was there a Saxon church at Cold Aston? The only archaeological trace is the cross-shaft now found in the porch. However, we do have a written record of 904 AD, when Werfrith, the Bishop of Worcester, granted land at Cold Aston to a thegn named Wulfsig.

Such grants were often made to mark the building of a church. It is not conclusive proof, but combined with the carved fragment in the porch, and very old stonework in the lower section of the chancel wall, we have to say it is a distinct possibility that a church has stood here for over 1100 years. 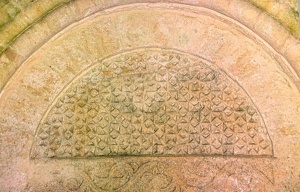 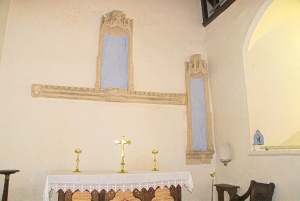 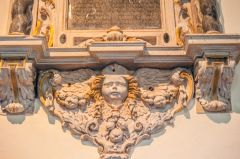 More self catering near Cold Aston