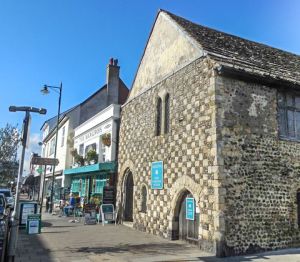 Marlipins Museum
Marlipins is a fascinating local history and archaeology museum housed in one of the oldest buildings in Sussex. Peek inside the 12th-century walls of the museum building itself!
History
The attractive chequerboard patterned building dates to the late 12th century, probably between 1167-1197. If so, that would make Marlipins the oldest complete secular building in Sussex if not in all of Britain. The distinctive front facade, made of dark blocks of flint alternating with Caen stone, was added in the late 13th century.

Why was it built?
We're on shaky ground here, for evidence is scanty. It may have been a storage building for the de Braose family of Bramber Castle, or as a merchant's warehouse. Other theories suggest that it was a meeting place for the Knights Templar or part of a Carmelite Priory. It may have served as a courthouse for the nearby market or even served as a chapel. The most recent theory is that the building served as a general customs house for the market and port.

The earliest written record dates to 1346 when it may have served as an Oat Market. It was later owned by the Prior of Lewes and used for storage. In more recent years the building was a toy shop, a builder's store, and a warehouse.

Over 2500 objects showcase the natural history, the World Wars in Sussex, and the connections of Shoreham with the early days of filmmaking. Did you know that Shoreham Beach was the British version of Hollywood in 1914 when silent-film makers came here attracted by the quality of the light?

Learn about Shoreham airport, opened in 1910 as the first licensed airfield in Britain, and discover the history of the Old Fort, built by Lord Palmerston on Shoreham Beach to counter the threat of a French invasion. See a wealth of old photos depicting Shoreham in years gone by, documentary archives, and objects from everyday life.

More self catering near Marlipins Museum >>