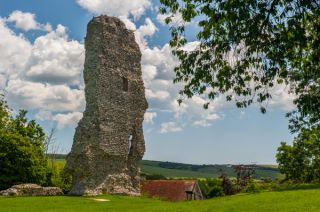 Bramber Castle is an early Norman motte and bailey castle built by William De Braose in 1070. The De Braose family retained the castle for over 250 years. The castle was subject to siege by Parliament during the Civil War; Parliamentary troops set cannons up in the transepts of the nearby church to fire down upon the castle. Today only the ruins of the gatehouse suggest the imposing nature of the stronghold.

William de Braose was a Norman nobleman who fought alongside William the Conqueror at the Battle of Hastings. William rewarded De Braose's support by granting him large tracts of land, including the area around Bramber. De Braose quickly built a castle at Bramber to defend his territory, and the first rudimentary motte and bailey fortress was in place before 1073.

At the same time, De Braose founded a church down the sloping hill from the castle and established the borough of Bramber in the valley below. Bramber Castle was part of a series of Norman fortresses along the Sussex coast, established to extend Norman control over their newly conquered lands. Each castle served not only as a defensive fortress but as a seat of local administration. There were further Norman castles at Chichester, Arundel, Lewes, Pevensey, and Hastings.

Before the end of the 11th century, the hilltop site was encircled by a ditch, and a stone curtain wall was erected, with a gatehouse facing south. The gatehouse was enlarged in the late 12th century, probably under the orders of Philip de Braose. The new structure stood 3 storeys high and was built from a mix of chalk, flint, limestone, and imported Caen stone. The tower is by far the best-preserved part of the castle today, standing like a slender pillar at the entrance to the site.

The castle remained in the hands of the De Braose family for over 2 centuries, but by the early 13th century they had become too powerful for the liking of King John. In 1208 John ordered William de Braose III outlawed and his family thrown into prison. His wife and eldest son were starved to death in the dungeons of Windsor Castle.

The brutality of the king's treatment of his one-time ally shocked even the hardened lords of the day and was one of the precipitating factors that led to the Baron's Revolt that culminated in the Magna Carta. Though Braose's younger son eventually regained the family estates, they never enjoyed the same level of power and prosperity.

The need for a defensive fortress was not as great by the later Middle Ages, and Bramber Castle was allowed to crumble and decay, becoming the picturesque ruin we see today. Bramber is an open site, accessible at any time. Do take the time to pop into the attractive little church, established by the same Braose who built the first castle at Bramber. 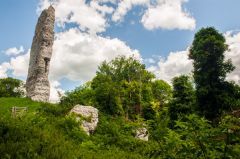 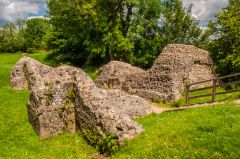 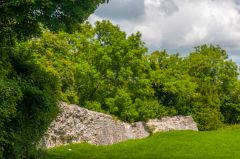 About Bramber Castle
Address: A283, Bramber, West Sussex, England
Attraction Type: Castle
Location: Off the A283 at the western edge of Bramber

More self catering near Bramber Castle >>