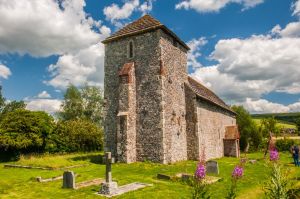 Botolphs, St Botolph Church
The ancient church of St Botolph serves the rural hamlet - it cannot truly be called a village - of Botolphs, near Bramber. In fact, you can make out the ruined tower of Bramber Castle from the churchyard of St Botolphs.

The building dates to about AD 950, and Saxon construction can be seen in the south wall and chancel arch. The slender tower, though it looks Saxon, is actually a 13th-century addition, as is the chancel, which replaced a Saxon apse.

At the time of the Domesday Book the parish was known as Annington. The Normans ignored the dedication to St Botolph and renamed the church in honour of St Peter. However, local habit meant that the Norman name never caught on, and by the 14th century even the official church records referred to it once more as St Botolphs. The village itself took on the name Botolphs, after the church.

The main interior features are the simple round-headed chancel arch, typical of Saxon work, and the simple tub font. If you walk around the outside of the church you can see blocked arches on the north wall which show that there used to be a north aisle, but this was removed in the late 18th century and the openings filled in.

There are faint traces of medieval wall paintings around the chancel arch, and a 14th-century piscina. The pulpit dates to about 1630, and there is panelling in the nave of the same date.