HERITAGE HIGHLIGHTS:   Both Elizabeth I and Charles I stayed here 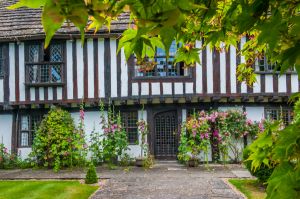 The finest example of a half-timbered building in Sussex, St Mary's House was built by William Wayneflete, Bishop of Winchester, about 1470. Wayneflete's house was intended as a residence for four monks who served as bridge wardens for an important crossing of the River Adur at Bramber.

The rooms are beautifully panelled, but even more impressive is the unique Elizabethan 'trompe l'oeil Painted Room', thought to have been painted for a visit by Queen Elizabeth I. This chamber features one of the first examples in Britain of painting designed to trick the eye of the viewer into thinking they are looking at a three-dimensional scene. The overmantle is decorated with a scene showing the 1545 sea battle in which the Mary Rose was sunk.

The cellars of St Mary's House, located beneath the entrance hall, were used by Sir Arthur Conan Doyle as the inspiration for his Sherlock Holmes mystery, The Musgrave Ritual.

The Kings Room has an equally dramatic history - it is named for Charles II, who took refuge here on his flight to exile in France following his defeat at the Battle of Worcester in 1651. You can still make out traces of medieval paintings on the walls.

The Drawing Room originally was part of the monastic Common Room. This chamber is decorated with elaborate Jacobean panelling. The highlight is the overmantle, with marquetry patterns in burr walnut, oak, and boxwood depicting musical instruments and flintlock guns. The Monk's Parlour was exactly what it sounds like; a room for the monks who served as wardens for the Great Bridge of Bramber, and offered lodging to pilgrims. In the south hall is lined wonderful gilded-leather, decorated with images of birds, fruit, and flowers.

Perhaps the most extraordinary room in the house is the Octagon, with a collection of over 80 dolls in historic costume. From the Octagon false bookcases hide doors leading to the opulent Gothic-inspired Music Room, built in the 1890s for weekend house-parties.

The house is set in beautiful Victorian gardens, which include a topiary garden, rose garden, and terraced garden areas. There is a Secret Garden, with a huge 140-foot long fruit wall. In this garden is a Victorian potting shed which serves to display rural tools and gardening equipment from times past. From this garden, you can access heated pineapple pits made to grow the exotic fruit no matter what the weather.

Oh, how I wish I'd been allowed to take interior photographs of St Mary's House! From age-darkened oak beams to atmospheric chambers used by kings, queens, and monks, the house is an absolute gem. I don't always agree with Simon Jenkins, but he's absolutely right to include St Mary's as one of England's Thousand Best Houses.

What I did not expect were the extensive gardens that surround the house. There are several small garden 'rooms' beside the house, and a trail leads behind several nearby buildings to a much larger garden, built during the Victorian period. Though of a different style to the medieval house, the gardens are a secluded and peaceful place, the sort of place you want to sit and just let the world drift by. I cannot recommend St Mary's House highly enough. 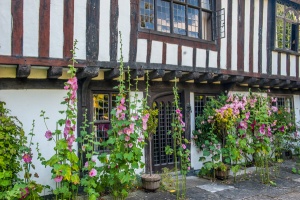 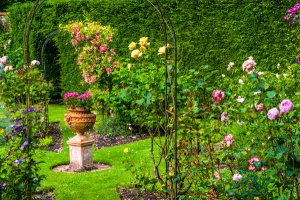 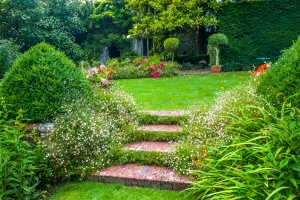 A garden terrace below the house 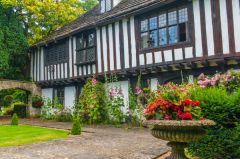 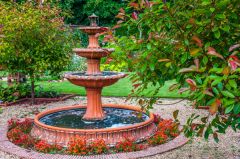 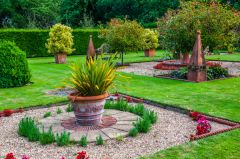