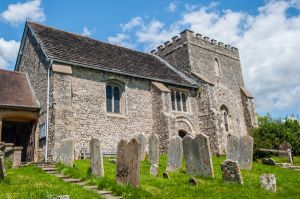 When William de Braose, one of William the Conqueror's most powerful barons, built Bramber Castle shortly after the Norman invasion, he also built a church, making St Nicholas the oldest Norman church in Sussex. Though the castle is in ruins today, the church is very much in existence and stands immediately downhill of the castle gatehouse on a slope looking out over the village.

St Nicholas was originally built for a college of secular canons, but by the mid-13th century, it was given over to be the parish church of Bramber. The first church was built on a cruciform plan, with a tower over the crossing.

The original nave still stands, along with the chancel arch, while the crossing itself now serves as the chancel. The low tower, though it looks original, is actually an 18th-century rebuilding. The quality of the stonework suggests that the church was built by Norman masons brought to England to work on De Braose's castle.

The main interior interest is the surviving 11th-century carving detail, in particular, the capitals supporting the chancel arch. These capitals are carved in wonderful early Norman style, with heads, and a panel depicting the Biblical story of the fox and geese.

The three-light east window, though it appears Norman, is actually a Victorian replacement. There is a 13th-century font, and the oldest monument is that of Thomas Green (d 1789), his wife and daughter.

St Nicholas is a charming Norman church, and well worth a visit, especially if you are already visiting Bramber Castle! The church is open daily. 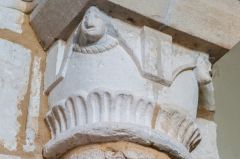 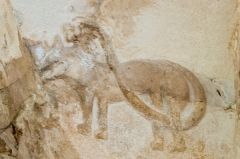 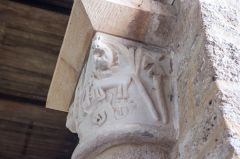