HERITAGE HIGHLIGHTS:   The earliest use of an arrowhead bastion defense in England 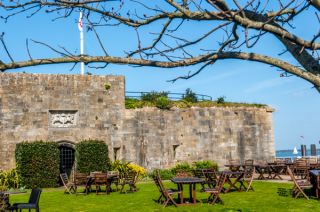 Yarmouth Castle was built by Henry VIII to guard the entry to Yarmouth's port from the Solent. Finished in 1547, this was the last castle to be built in Henry's ambitious system of coastal defences and the first to adopt the new 'arrowhead' artillery bastion style.

In 1545 a French fleet raided the Solent. Henry VIII, fearful of future raids, decided to strengthen the defenses along the channel between Hampshire and the Isle of Wight. He built Hurst Castle on the mainland to guard the western approach to the Solent, and Yarmouth Castle on the island. The castle was built very quickly; it was finished by September, 1547 and was last fort built by Henry as part of his coastal defense system that included castles at Deal and Walmer on the mainland.

Yarmouth was very different from other 'Henrician' forts; it is a simple square, angled to project outwards into the Solent on the north and west sides. A thick curtain wall protected an open interior courtyard. The landward side was protected by a single bastion in the south-east corner; the first example in England of the bastion design recently invented in Italy.

The point of the arrowhead is protected by gun ports on either side. The arrowhead bastion was built of simple masonry, but the design was later adapted in other castles to use stronger stone covered by earth.

Another unusual feature at Yarmouth is that there is no central tower as in Henry's other major castles. 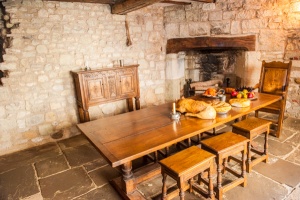 Yet Yarmouth Castle was not built solely to defend against a sea attack. Most of its firepower was concentrated on the Solent and Yar estuary to guard against a landing, but if invaders landed elsewhere and attacked from the landward side the castle needed more defences.

To meet this possible threat a moat surrounded the south and east, fed by the sea, and the arrow headed bastion provided flanking fire along the moat.

Over the following centuries Yarmouth Castle was greatly altered. The northern half of the courtyard was filled with earth to create a gun battery. This reduced the size of the original courtyard, which now seems little more than a narrow alleyway between the battery and the landward entrance.

The castle was altered around 1670 when a new entrance was inserted in the south range, and the original eastern gate fell out of use. The moat was filled in and its eastern section turned into a garden for an elegant new house, now the George Hotel, built by Sir Robert Holmes, the island's governor from 1668-1692.

Holmes was a controversial character who purchased the governorship after a naval career that saw him reprimanded more than once for attacking Dutch ships and towns without authority. During his long tenure as Governor of the Isle of Wight, Holmes was accused of falsifying pay claims for his men, and illegally seizing the cargo of wrecked ships.

The castle was garrisoned until 1885, but the castle then fell out of use and is now preserved by English Heritage. 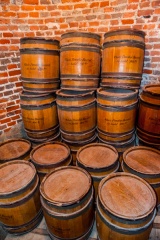 You enter up a narrow lane beside the modern ferry terminal, through the 17th century entrance passage and into what remains of the original courtyard. To your left is a small magazine, where barrels of gunpowder were stored. This area was originally intended as accommodation, but in 1632 was converted to its current use.

In the ground are sluice channels which allowed seawater to connect to the moat. To the right of the entrance is the Master Gunner's house, with its own small Parlour and Hall.

A passage leads from the Hall to the small kitchen area built into the landward bastion. This is a quite bizarre chamber, with a fireplace and cooking facilities as you would expect, but with guns carefully set to fire out strategically placed ports to defend the landward moat. Quite how the residents dealt with the danger of sparks from the kitchen fire igniting gunpowder is a matter for conjecture!

Back in the courtyard, you can mount a set of stairs to the battery which occupies half the site. There are several large guns mounted here, pointing out into the Solent.

One of the best places to really get a sense of the castle layout is not within the castle at all, but from Yarmouth pier, which extends well out into the Solent immediately beside the castle. If you walk out onto the pier and look back you can see how the castle projects out into the channel and how the defences are arranged. 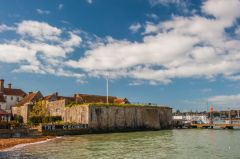 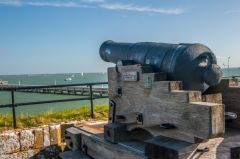 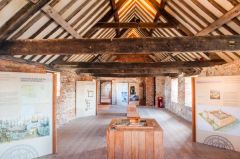 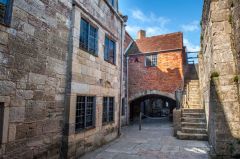 More self catering near Yarmouth Castle >> 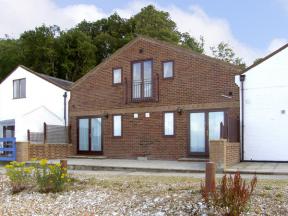 Starboard, a ground floor, studio apartment, is situated on the beach, within walking distance of the town of Yarmouth. Sleeping 2, this apartment is perfect for couples on a romantic …
Sleeps 2 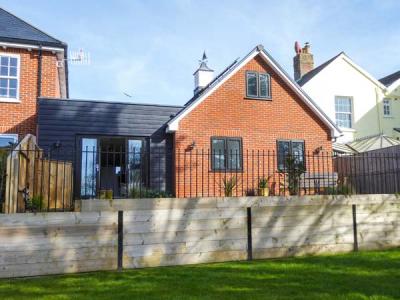 This wonderful cottage is attached to the owner's home outside Yarmouth and sleeps four people in two bedrooms.
Sleeps 4