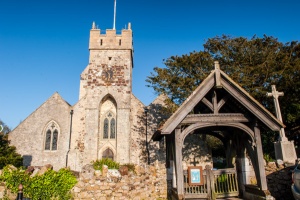 All Saints church stands on a rise of ground above the River Yar, and is one of the oldest buildings on the Isle of Wight, with a history dating back to the 9th century. That first church was built of timber, and served what was then the Isle of Freshwater.

Remnants of the first Saxon stone church still exist, with 'long and short' stonework high on both the two west piers of the nave. These probably formed part of the original west wall.

Most of the stone building we see today dates to the 12th century, including a Norman doorway in the north porch. In the 14th century a pair of sie chapels were added. In the south, or Afton Chapel, is a memorial to Alfred, Lord Tennyson, with a large bust of the poet set within a decoratively carved tomb recess.

In 1853 Alfred, Lord Tennyson, moved to Freshwater with his family, and they worshipped at All Saints church. Tennyson's second son, Lionel, was born in Freshwater and christened at All Saints. Within the church are memorials to several of the Tennyson family, including Lionel, who died and was buried at sea in 1886.

Tennyson's wife Emily survived her husband and is buried in the churchyard, with several other members of her family. To find Lady Tennyson's grave, walk around the east end of the church to the back of the churchyard. The Tennyson tomb is a rectangular altar tomb, with a large recumbent cross on the top. 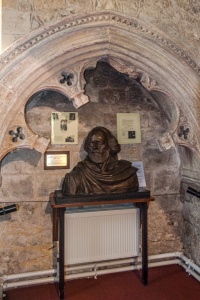 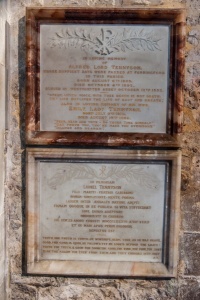 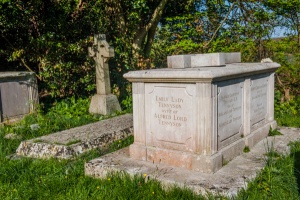 Lady Tennyson's tomb in the churchyard

The oldest historic feature inside the church is the 12th-century font, set on rounded columns of Purbeck marble. Look for incised carvings on the font face.

One of the most fascinating historical features is one about which we know very little. Set on the east wall of the north aisle is a beautifully preserved memorial brass of a knight, clad in armour that suggests a date in the reign of Richard II, that is, sometime in the last few decades of the 14th century.

We do not know who the knight may be, but one possibility is Adam de Compton. The brass is quite exquisite in its detail; without doubt one of the best-preserved 14th-century brasses I've ever seen.

Immediately outside the churchyard gate is the attractive Red Lion pub. During the Commonwealth period, a rector of All Saints was put in prison after he was overheard uttering derogatory remarks about Oliver Cromwell while drinking at the Red Lion. 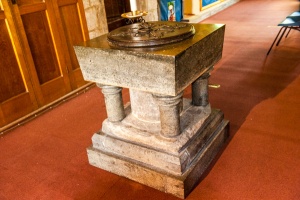 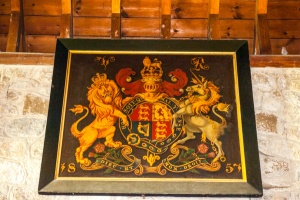 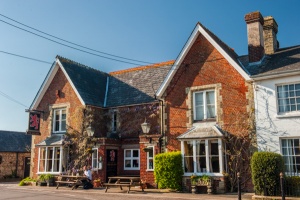 The Red Lion, where a vicar's loose talk
cost him his freedom

About Freshwater
Address: Church Place, Freshwater, Isle of Wight, England, PO40 9BP
Attraction Type: Historic Church
Location: At the end of Church Place, near the Red Lion pub at the northern end of The Causeway. Limited parking along the road and just outside the churchyard. The church was open when we visited.
Location map
OS: SZ346872
Photo Credit: David Ross and Britain Express

More self catering near Freshwater

More bed and breakfasts near Freshwater

Self Catering near Freshwater