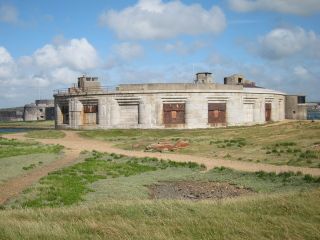 Hurst Castle
One of Henry VIII's system of coastal forts, completed in 1544, Hurst Castle occupies a position at the end of a long spit of land, projecting into the western end of the Solent. The castle consists of a circular keep with projecting towers, with a large enclosure to the landward side.
Charles I was briefly imprisoned here in 1648 before his final journey to Windsor and eventual execution in London.

Hurst Castle was a 'Device Fort', one of a series of artillery forts built along the south coast to defend against an anticipated attack from France and Spain following Henry's contentious divorce from Catherine of Aragon. The location was ideal for controlling access to the Solent, for the strong tides and currents in the channel would make any attacking ships vulnerable to artillery fire from the fort. Work was begun around 1540 but was not completed for another 4 years.

Though the fort was continuously garrisoned, it seems that the artillery was not maintained very well, for in 1628 the porter complained that only 4 or 5 of his 27 pieces of ordnance were capable of firing a shot.

The castle was garrisoned for Parliament in the Civil War, and though Charles II initially tried to disband it after the Restoration of the monarchy, nothing was done. Governors regularly complained of poor equipment and disrepair to the castle. Finally in 1700 Parliament decided that Hurst should become a prison for Catholic priests, though it seems only one priest was ever actually imprisoned here. That was Father Paul (Matthew) Atkinson, a Franciscan, who spent nearly 30 years in prison before his death in 1739.

Later in the 18th century, Hurst Castle was used by smugglers, and it was not until 1805 that the threat of invasion by Napoleon prompted a strengthening of the central tower. The castle was used during both world wars before finally passing into the hands of English Heritage.

Within the west wing of the Hurst Castle enclosure are a pair of historic lighthouses, Low Light (built in the 1860s) and an adjacent iron lighthouse built in 1911. These 'low' lights are overshadowed by the nearby 'High Light', or Hurst Point Lighthouse, built in 1867.

More self catering near Hurst Castle >>