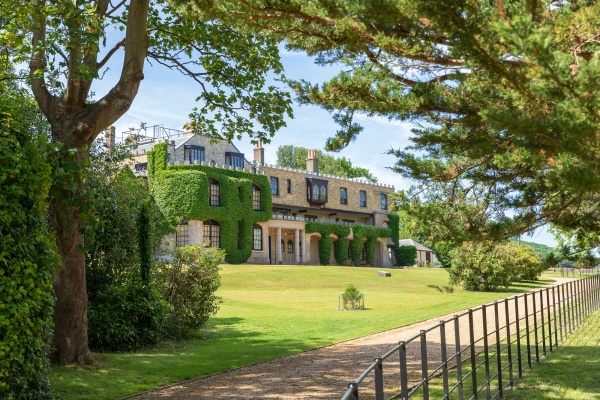 Farringford is a beautiful historic house in Gothic style, on the south coast of the Isle of Wight. The house was the main residence of Alfred Tennyson, Queen Victoria's Poet Laureate, from 1856 until his death in 1892.

After Tennyson's death, the house stayed in his family's hands until 1945, when it was transformed into a hotel. Farringford served as a hotel until 2009, but after an extensive restoration, it was re-opened to the public as a historic home, reflecting how it looked during Tennyson's lifetime.

Farringford lies just west of Freshwater Bay, on the northern slope of Tennyson Down. The poet took regular walks along the Down, walking as far as Needles Point, at the westernmost point of the Isle of Wight. Atop the Down is the Tennyson Monument, in honour of the poet's close connection to the area.

Farringford's history goes back to at least the 13th century when the powerful de Feringford family owned large estates of land around Freshwater. It later formed part of the manor of Brook. In 1452 the estate passed from John Rookley to his daughter Joan and her husband Thomas Bowerman, and it stayed in the Bowerman family for almost 350 years.

In 1794 Edward Rushworth purchased the Farringford Estate. Rushworth was a clergyman, an MP for Newport and Yarmouth, and served as Mayor of Yarmouth no less than 13 times. In 1802 Rushworth built Farringford Lodge as a gift for his daughter and son-in-law, James Murray, but Murray had continuing financial difficulties so Rushworth took over the house himself. The house became known as Farringford Hill, and later simply as Farringford.

The name Farringford Lodge suggests that it was never intended as the main family home, but as a lodge, or summer home. In 1823 John Hamborough of Northamptonshire bought Farringford and altered the house considerably, transforming a simple Georgian house to a Gothic fantasy, with arched windows decorated with medieval-style tracery, and Gothic style decorative elements such as medieval battlements and colonnades.

In 1853 Alfred Tennyson was visiting friends near Ventnor, when he heard that Farringford was available to rent. Even though the house was run down, Tennyson's wife Emily adored the view from the drawing room window, and the couple decided to rent the property for three years - at an annual cost of just £2 - with an option to purchase at the end of that time.

Their choice did not meet with universal approval. Emily Tennyson wrote in her journal that when they arrived on a misty morning in November 1853 two of their servants burst into tears at the thought of living in such a lonely place.

The Tennysons loved Farringford and bought the property when their rental agreement expired in 1856. The family gradually made the house their own, adding oriel windows to the upper storey rooms to admit more light and adding a study for Tennyson's ever-expanding book collection.

As the Poet Laureate, Tennyson attracted droves of famous visitors, from artists and fellow writers to philosophers and politicians. Farringford became a destination for many famous names, including Prince Albert, Lewis Carroll, Edward Lear, and fellow poet Henry Wadsworth Longfellow.

Another visitor was the Pre-Raphaelite painter John Everett Millais, who was inspired to paint his famous work 'Autumn Leaves' by an afternoon helping Alfred Tennyson sweep up and burn leaves in the gardens at Farringford. Artist Helen Allingham visited, and painted a series of works showing the house, the estate, and Tennyson himself. Sir Charles Hubert Parry, the composer of the music for 'Jerusalem', wrote that Farringford was ' the most old-fashioned house I ever saw', though he enjoyed visiting.

When Alfred Tennyson died in 1892 the house passed to his son Hallam, who built the second storey over the north wing (now the main house frontage). The house was sold after Hallam's death and the house was converted into a hotel.

The hotel used produce from the former kitchen garden and Home Farm to supply their restaurant. The hotel owners also had six cottages built in the grounds as accommodation for guests. The architect for these cottages was Clough Williams-Ellis, more famous for his fantasy village of Portmeirion in Wales.

The hotel closed in 2009 and over the course of the following decade it was gradually restored to its 19th-century condition to reflect what it was like when the Tennyson family lived here.

Writing in 1854, Tennyson mentioned his 'careless-order'd garden'. The extensive restoration work that helped bring the house back to life also helped recreate the gardens that Tennyson knew and loved. The centrepiece is a walled kitchen garden, where Tennyson often walked and where he would sit with guests.

The garden is planted according to descriptions from Emily Tennyson's journal, Oriental poppies, delphiniums, and tobacco plants among the featured species. In the garden is a sundial made for the Tennyson family by the sculptor Mary Seton Watts.

Visitors can enjoy the historic parkland surrounding the house, and perhaps catch a glimpse of the elusive red squirrels that enjoy the estate.

Farringford is located in Freshwater, in the south-western corner of the Isle of Wight. The easiest access is off the Military Road (A3055) from the east or off the A3054 from Yarmouth. The house is on the northern slopes of Tennyson Down, where the author took regular walks.

More self catering near Farringford

More bed and breakfasts near Farringford

Self Catering near Freshwater