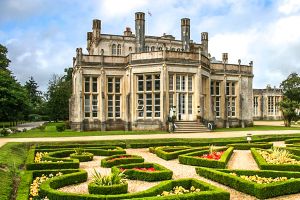 Highcliffe Castle
'Romantic and Picturesque' both descriptively and architecturally, the L-shaped Highcliffe Castle was built in 1835 by Lord Stuart de Rothesay to incorporate carved medieval stonework and stained glass from France and beyond. A superb example of Gothic Revival style.

John Stuart, the 3rd Earl of Bute (1713-1792) was an avid gardener, and in the early 1770s he came to Christchurch Bay in search of rare plants. He found instead 'the fairest outlook in England', and decided to build a house on the high cliffs overlooking the bay, in an area of open heath. The first High Cliff House was finished in 1775 and almost immediately extended.

The Earl surrounded the new house with a miniature version of the botanic gardens at Kew, which he had helped found. He created a 4-acre walled garden where he could experiment with new plants, and had a huge conservatory built along one side of the house.

The Earl called in CapabilityBrown to help lay out the surrounding coast and countryside as a picturesque landscape garden. The Earl tragically died after a fall from the cliffs while trying to reach a plant.

In 1831 the Earl's grandson, Lord Stuart de Rothesay, embarked on an ambitious project to build a new family home on the estate. With the help of architect William Donthorne, he created a Gothic Revival castellated mansion, using stones from the ruined abbey at Jumieges and the stately home of the Grande Maison des Andelys, both of which had become derelict after the French Revolution.

he new Highcliffe Castle incorporated a complete 16th-century oriel window and a stained glass window from the earlier buildings.

The house passed by inheritance to Lady Waterford, who welcomed the Prince and Princess of Wales (later King Edward and Queen Alexandra) as guests to Highcliffe. A later royal visitor was Kaiser Wilhelm II, who came here in 1907 to recover from ill-health. The Kaiser gave the castle owner, Edward Stuart Wortley, a pair of stained glass windows in gratitude for his hospitality. The German monarch was cheered wherever he went around Highcliffe, a stark contrast to how he was regarded just a few short years later when WWI broke out.

In total Highcliffe has welcomed 6 kings or future kings, and 10 queens or future queens, plus 22 princes and princesses.

The castle was then rented to a succession of tenants, most notably Harry Selfridge, founder of Selfridges department store in London. Despite the initial success of his business, Selfridge died penniless and is buried in the churchyard of St Marks in Highcliffe. The castle briefly served as a children's home and a seminary for Catholic priests. A pair of devastating fires in the 1960s left Highcliffe a roofless ruin, and for 2 decades if decayed, with flocks of doves the only residents in the once sumptuous rooms.

A huge restoration scheme spanning 20 years returned the castle to something approaching its 19th-century splendour. It is now operated by the Christchurch Council and is used for regular arts events as well as a venue for weddings and conferences.

The staterooms operate as a heritage centre, with exhibits on the history of the Christchurch area and the castle itself. The stunning interiors reflect how the house would have looked at the height of its 19th-century opulence.

Though most of the interior furnishings owned by the Stuart family is long gone, one thing they brought to Highcliffe is still very much in evidence; a superb collection of stained glass, spanning over 7 centuries from the 12th century to the Victorian era.

The most interesting stained glass window is the north window of the great hall, a 16th century 'Jesse window', depicting Christ's rather fanciful family tree growing from the sleeping figure of Jesse. The window was brought here from the church of St Vigour in Rouen and dates to 1547. Other stained glass includes examples from Switzerland, Germany, and the Low Countries.

The spectacular grounds give access to the beach and coastal path.

More self catering near Highcliffe Castle >> 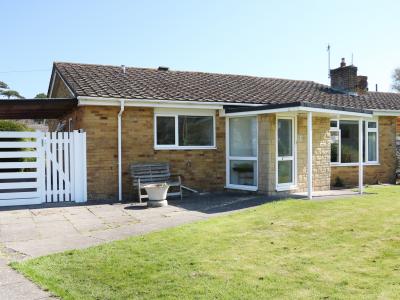 A detached bungalow in the town of Highcliffe in Devon, sleeping up to six people in three bedrooms.
Sleeps 5