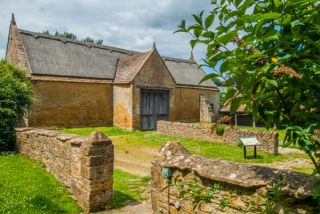 Sometime around the year 1300 John de Beauchamp, the 1st Baron Beauchamp, established a chapel dedicated to St Nicholas in his manor at Stoke sub Hamdon. The chapel was served by a priest, who lived in a nearby rectory. In 1304 the rector resigned his post and so Sir John founded a chantry college for four priests and a provost to serve the chapel. It is not clear whether the Beauchamps built a new building to house the priests, or if they simply reused the earlier rectory buildings.

The college was never large, nor prosperous, being dependent on the lord of the manor for income. It seems to have suffered from mismanagement, for a report in 1444 states that only 2 priests and a provost remained, and the college buildings had been allowed to fall into a state of disrepair. The Bishop of Wells handed the college over to the precentor of Wells for governance. The precentor may have been responsible for building the collegiate buildings we see today.

The governance of the chantry was in crown hands before the Dissolution of the Monasteries. In 1548 the chantry holder was the parish priest, who paid for a deputy to carry out his chantry duties. The actual chapel building became a chapel of ease for local residents, to save them the mile-long walk to the nearest parish church at East Stoke.

The chantry was abolished in 1548 and the buildings sold; the college became a private house and was used as a farm until it was purchased by the National Trust in 1961. 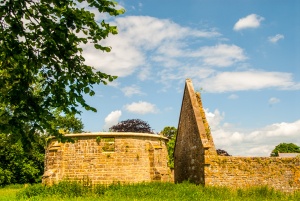 The dovecote and ruined barn

The most impressive priory building seems to have been the Provost's lodging, probably built around 1450-60, but incorporating stone from earlier Norman buildings. This is built to an 'L' plan, with wings of unequal size. There is a rectangular two-storey hall, 28 feet long, built from the earlier refectory. This has a 15th-century window inserted by Bishop Beckington of Wells.

There is a recess set into one wall which may have served as an aumbry, or cupboard for storing religious objects for services. The hall was later used as a coal store when the priory was used as a farm. One end of the hall leads to a parlour space, while the first floor was used as a dormitory. Beside the dormitory is a chapel, with a squint piercing the chapel wall.

To the south of the hall is a dining room and kitchen area with bedchambers above. Set into the centre of this space is a large fireplace with a bread oven.

Aside from this, there are several subsidiary buildings, including three barns and a circular 14th-century dovecote, all bounded by a very high (16 ft) 15th-century wall and arched gateway. The major barn is mostly 18th century but incorporates building stone from the medieval building. About 80 feet away is a second barn, this time thatched. This was thought to have been used as a tithe barn. A third, ruinous building stands to the north-west and is thought to have been used as a wagon shed.

This was an odd site to visit; there's no question that the medieval buildings held lots of interest, but the signage seemed underwhelming, so I was left to guess at some of the details. But the sense of history is almost palpable.

Stoke sub Hamdon is not a grand monastic ruin, but a small foundation by one local lord who wanted to ensure that the souls of he and his household were looked after by priests. How many other small foundations like this once existed in rural areas, serving one family's interests?

The Priory buildings have obviously been through several major transformations, but we should be thankful that so much has survived. It is fascinating to see this small religious site and wonder how the priests who served here lived and worked.

There is no obvious parking area. I just parked along the road through the village and walked. The site was open; indeed, I was the only one around and had the whole site to myself. I rather got the impression that very few people visit the priory, which is a shame, as I found it quite enjoyable. 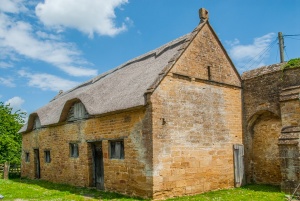 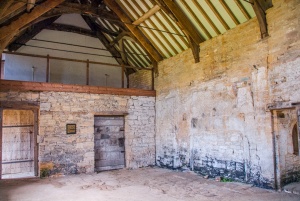 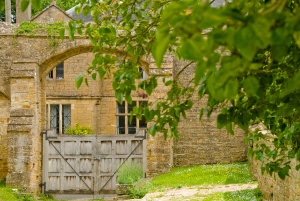 The 15th-century gateway and wall 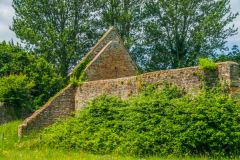 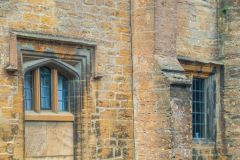 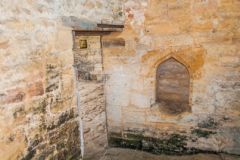 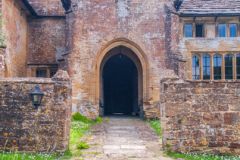 More self catering near Stoke-sub-Hamdon Priory >>