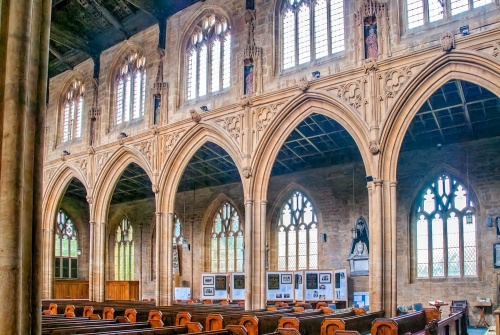 There was probably a church in Martock at the time of the Norman Conquest, but the first written record of a church comes from 1156. In 1228 the Treasurer of Wells Cathedral was named the rector of Martock.

The new rector stayed in the neighbouring Treasurer's House, now in the care of the National Trust. He also began building a larger, more impressive church to replace the original building. That 13th-century church was, in turn, rebuilt in the late medieval period, with only the east windows and part of the west wall surviving. 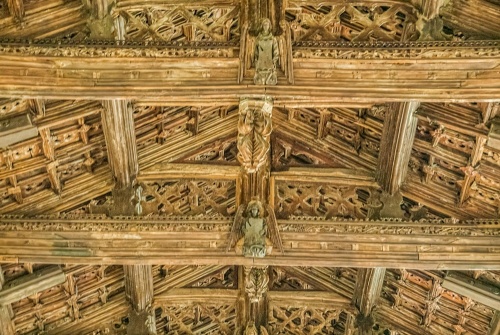 The four-stage west tower was added in the early years of the 16th century, to replace an earlier central tower over the crossing.

The pride of Martock Church is its superb angel roof, installed in the first decade of the 16th century and completed in 1513. The roof design is a king-post style with tracery infill between the truss beams. There are central pendants from each cross-beam, above which rise beautifully carved figures. 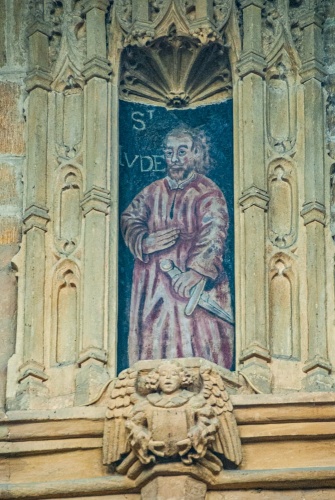 High on the nave walls is a series of twelve niches that hold paintings of the Apostles. The paintings with dark backgrounds date to the early 17th century while those with light backgrounds were painted after the Restoration of the Monarchy in 1660.

Though ostensibly religious figures, both the paintings and the carved figures in the roof are probably modelled after prominent local figures such as merchants, nobility, and church patrons. 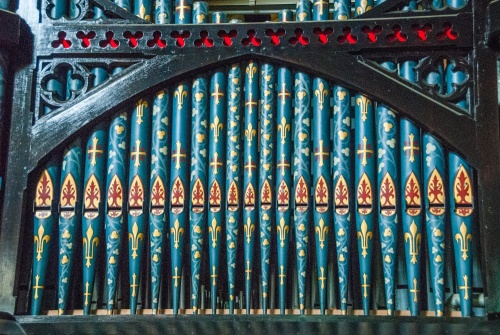 In 1645 Parliamentary cavalry were stationed in Martock following the Battle of Bridgwater and the church was used to house both the soldiers and their horses. Parliamentary soldiers were infamous for their destruction of churches, especially those with religious iconography, and Martock's church did not escape their attention.

It seems very likely that the stained glass in the clerestory windows was destroyed and subsequent restorers discovered Civil War musket balls embedded in the timbers, suggesting that the soldiers engaged in target practice while quartered inside the church.

The soldiers destroyed statues that originally adorned the niches on the nave walls. It seems peculiar that the parishioners did not replace the statues after the war, but decided to paint the niches instead. Perhaps it was simply a question of cost, or perhaps they didn't want to risk having new statues destroyed as well! 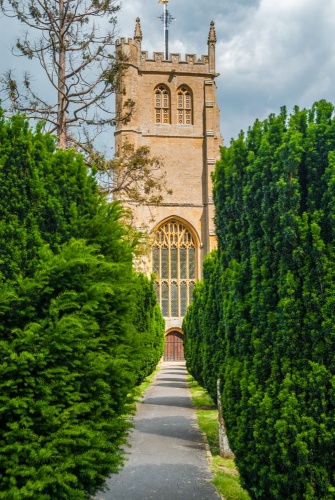 In the chancel is a worn 14th-century effigy of a woman under an arched niche.

Most of the interior furnishings date from a 19th-century restoration under the direction of Benjamin Ferrey, the diocesan architect, but the 15th-century octagonal font survives. The stone pulpit is Victorian, while the Lady Chapel screen dates to the 20th century.

All Saints' Church is at the southern end of Church Street in the heart of Martock, opposite the Treasurer's House. There is no dedicated parking, but we managed to find a place along the road. The church is open daily to visitors and was open when we visited.

More self catering near Martock, All Saints' Church

More bed and breakfasts near Martock, All Saints' Church