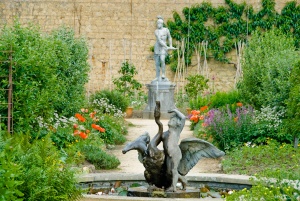 A lovely formal garden surrounding a superb Elizabethan manor. The gardens were inspired by the work of Gertrude Jekyll, and are composed of a series of garden rooms, each with a specific theme. There is a very large walled garden near the visitor entrance, and there is an arboretum, which is a colourful delight in Autumn.

There are 'rooms' for irises, roses, lilies, and a White room as well. The manor is built from lovely golden coloured Ham Hill stone. One striking feature of the exterior are the multitude of chimneys, a reflection of the wealth of the builders.

Barrington Court is an almost perfect example of an Elizabethan house. It was begun around 1538 by the Earl of Bridgwater. The Earl died bankrupt in 1548 and the house was completed by the new owner, William Clifton. 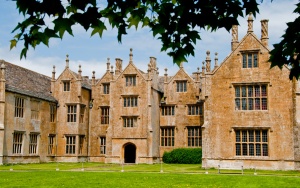 The lovely Elizabethan manor house
at Barrington
The grand stable block was added by still later owners, the Strode family, who owner Barrington until 1745. By the 20th century, the manor was derelict, and by the time it passed into the hands of the National Trust in 1907, the only inhabitants were chickens.

Barrington Court was the first country house purchased by the National Trust, and the Trust initially found the restoration project too daunting. It was only when the manor was leased to Coln Arthur Lyle in 1920 that the restoration of Barrington started in earnest. It was Lyle who footed the bill for the rebuilding of the interior, in part to act as a suitable place to store and exhibit his collection of decorative wood panelling.

It was Lyle who created the formal gardens surrounding the manor in the Arts and Craft style so popular at that time. Famed garden designer Gertrude Jekyll helped create the new walled garden area, and long avenues were created to tie in the manor house and new Arts and Crafts style estate buildings. The result is a wonderfully homogenous whole that seems as if it has always been the way you see it now. 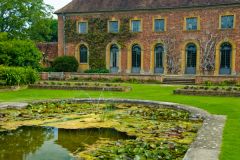 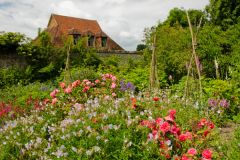 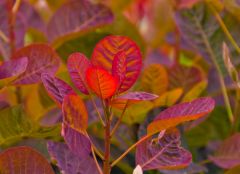 More self catering near Barrington Court