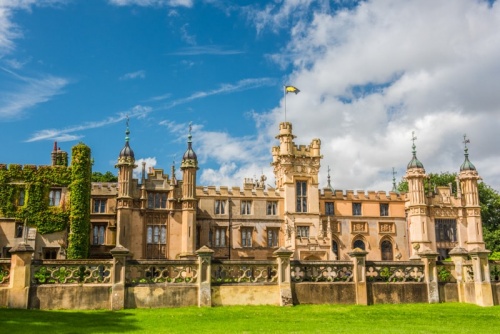 Home of the Lytton family for over 500 years, Knebworth was transformed in 1843 from a red brick Tudor house into a veritable feast of Victorian Gothic turrets, gargoyles and gryphons, by writer-statesman Edward Bulwer-Lytton. Though the house we see today owes almost everything to the romantic and somewhat eccentric spirit of Baron Edward, its roots lie with Sir Robert Lytton, a friend of Henry Tudor, Earl of Richmond.

Lytton fought with Tudor at Bosworth in 1485, when the Tudor dynasty was formed and Henry seized the throne as Henry VII. As his patron efforts were successful, so Lytton prospered. In 1490 he bought the medieval fortified house at Knebworth and over the rest of his life he transformed the castle into a large and comfortable residence, suitable for a man in high standing at court. 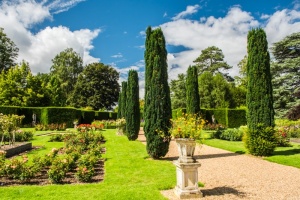 The Tudor version of Knebworth was made of brick - then an expensive and fashionable material - and featured large mullioned windows. The mansion stayed essentially unchanged for the next 3 centuries, but by the time Elizabeth Bulwer-Lytton took control in 1810 the old house was in dire condition.

Lady Elizabeth started the transformation of Knebworth into a Gothic fantasy castle. But her son, Edward, distracted her attention from the house. He married against her wishes, so Elizabeth cancelled his allowance.

In order to make ends meet and maintain his lifestyle as a society dandy, the young Edward turned his hand to writing novels. Lots of novels. He was practically churning out fiction in order to pay his bills.

Edward split with his 'unsuitable' wife. It was not what you would call an amicable split, for when he decided to run for parliament she showed up and publicly denounced him at a political rally.

He retaliated by having her thrown into an asylum. Public pressure forced her release, upon which she embarked on a lifelong crusade for women's rights, becoming an early icon of the suffragette movement.

As for Sir Edward, he devoted himself to bettering his mother's efforts at transforming Knebworth, allowing his romantic ideals to guide the transformation, until the house bristled with fantastic examples of medieval style, with spires and towers sprouting in profusion like spring flowers.

The interiors were styled by JG Grace, and later by Sir Edward Lutyens, a family relation. The panelled banqueting hall off the main entrance is by John Webb, the best-known pupil of Inigo Jones. 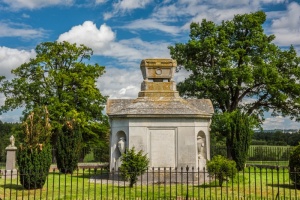 There is a Jacobean minstrels gallery hovering above the hall, where Charles Dickens liked to hold amateur theatricals when he visited. Of the other ebullient, eccentric rooms, perhaps the most interesting is the study, left as it was when Edward Bulwer-Lytton used it as his writing den.

One of the more peculiar objects in the room is a large crystal ball, into which the writer would stare for hours at a time, waiting for inspiration to strike.

Though almost forgotten by modern readers, Bulwer-Lytton was an exceptionally popular author in his day. He is best remembered today as the author of that oft-quoted phrase, 'The pen is mightier than the sword'.

Nowadays Knebworth is most well known as a venue for huge rock concerts, and a staircase in the house is lined with posters from previous concerts, many of them signed by the performers. On quieter days throughout the spring and summer you can wander in peace around the 25 acres of grounds, or the varied stately public rooms of this lived-in home.

Knebworth is easy to reach off the A1 at Junction 7 (Stevenage). As our family discovered the hard way, there is no access to the house from Knebworth village. Visits to the house are either by timed tour or free-flow depending on which day you visit. If you have a preference one way or the other it is a good idea to check the official website to see which access scheme is operating on which days.

Our family came on a guided tour day, and I'm glad we did, for the tour was exceptional. Our guide was extremely good; informative, witty, and very good at answering questions about the house and its people. Once the tour was over we had the opportunity to visit a special exhibit on Knebworth's strong links to India and the Raj.

Garden: 16th-century gardens were largely transformed in Victorian, and again in Edwardian, times, and since the 1980s have again been treated to a programme of restoration and development. You will find quite a range of garden features, from the traditional to the not-so: a sunken lawn with pollarded limes, formal walled gardens, Victorian statuary, sprawling shrub roses, a maze, a gold garden, woodland walks, a pet cemetery, and a dino trail. 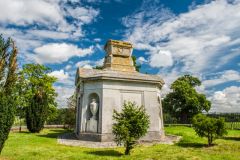 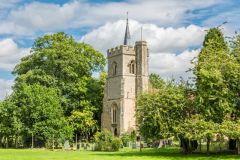 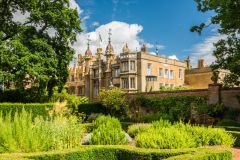 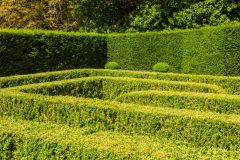 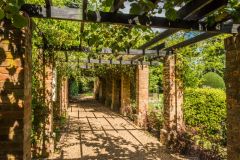 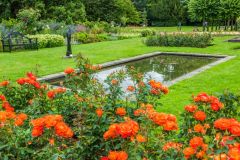 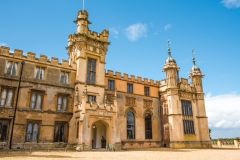 More self catering near Knebworth House >>