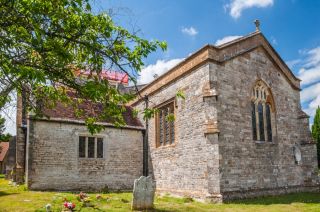 The church of St Mary the Virgin in Puddletown dates to the Norman period, but much of the building we can see today is a result of rebuilding in the 15th century. Of the earlier building the base of the tower, sections of the southwest corner, and possibly the south respond of the chancel arch survive.

One notable Norman feature that did survive is the superb font. This is probably 12th century, and has an unusual shape, like a beaker. It is carved with an intricate design of interwoven acanthus leaves, that seem to cover every square inch of the exterior surface.

The interior has almost an embarrassment of riches when it comes to 17th-century woodwork. The pulpit, reading desk, altar rails, font cover, and box pews all date from that period. So too does the gallery over the west end of the church. This is wonderfully carved and bears a Latin inscription which translates as 'You come hither, not to be seen, but to listen and to pray'.

The gallery bears the date 1635, and affixed to it is a wooden coat of arms of uncertain date. Thomas Hardy's grandfather is known to have played the cello in the gallery when musicians were used for music during services. 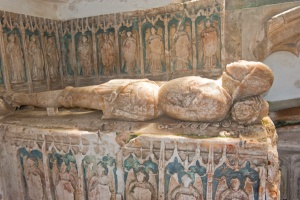 The major historic interest of St Mary's is to be found in the south transept, usually known as the Athelhampton Chantry. The chantry is filled with monuments to the Martyn family of nearby Athelhampton House. The oldest tomb dates to the 13th century, and beside it is a table tomb with alabaster effigies of a later Martyn couple.

Beneath the arch is a wonderfully carved table tomb with the effigy of Sir William Martyn (d. 1503). Sir William built much of Athelhampton House. The carving on his effigy is of extremely high quality. Interestingly, it was not carved until about 30 years after his death. Sir William's feet rest on a grinning monkey, the symbol of the Martyns.

There are fragments of Saxon carving set into the wall of the north chapel, and 17th century painted texts on the nave walls. Outside in the churchyard is the grave of Thomas Hardy's uncle John Antell, who is thought to have been the model for Jude in Jude the Obscure.

St Mary's is a wonderful church, certainly one of the finest historic churches in Dorset, and well worth a visit. 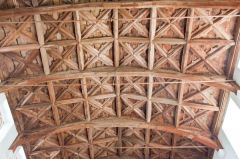 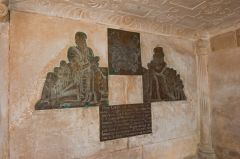 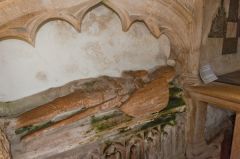