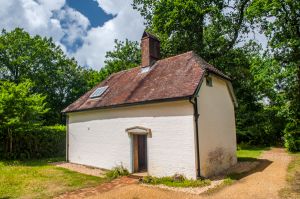 Clouds Hill
Clouds Hill is a small cottage used by TE Lawrence (aka Lawrence of Arabia). Though it is often referred to as Lawrence's home, that's not strictly accurate. It was, in fact, a 'pied a terre' used by Lawrence as a quiet retreat to write and entertain guests while he was stationed at the nearby army base at Bovington. During his time at Clouds Hill Lawrence finished writing both The Seven Pillars of Wisdom, and The Mint.

Clouds Hill was built around 1808 as an estate forester's cottage. When Lawrence purchased it in 1923 it was in poor condition, but he was able to fix it up to his admittedly austere specifications.

The cottage is extremely small, consisting of only four rooms; downstairs there is a bedroom and pantry/kitchen, and upstairs is a 'guest bedroom' and a sitting room. A few steps from the door is a small shed that Lawrence built to house his beloved Brough Superior motorcycle, on which he was killed in a road accident within walking distance of Clouds Hill.

The cottage is essentially as he left it when he died, including the very unusual aluminium foil wall surfacing in the upstairs guest room, called the 'Bunk Room'. The cottage was given to the National Trust in 1938 by Lawrence's brother Arnold, to act as a memorial.

The Lawrence of Arabia Walking Trail links Lawrence's cottage at Clouds Hill with his burial place at Moreton, Bovington village and the Tank Museum there. The trail stretches for almost 7 miles but can be taken in smaller sections, and walk leaflets are available at Clouds Hill. While you are in the area, take the time to visit Lawrence's grave in Moreton, and the striking Georgian church there, which has a collection of stunning etched glass windows. 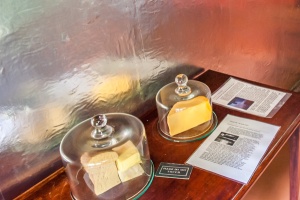 Food on a side table in the Bunk Room 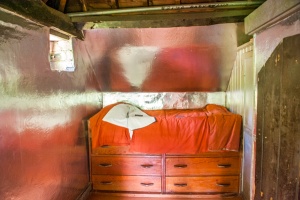 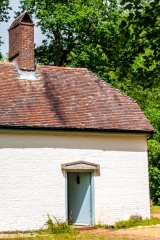 More self catering near Clouds Hill >>