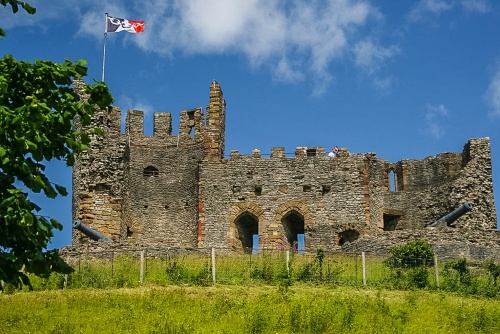 Dudley Castle is a ruined medieval castle contained within Dudley Zoological Gardens. The castle was begun shortly after the Norman Conquest, destroyed by Henry II, rebuilt in the late 13th century, slighted by Parliament after the Civil War, and finally destroyed by fire in 1750.

The origins of Dudley Castle are vague. The most commonly accepted version of events is that a motte and bailey castle was begun around 1070 by a Norman noble named Ansculf de Picquigny, who fought with William the Conqueror at the Battle of Hastings and was rewarded with lands in the Midlands.

An alternative version of events puts the origins of Dudley Castle as far back as the year AD 700 when a Mercian nobleman named Doddo or Dodo built a timber fortress here. This claim is generally disregarded by modern historians.

The castle was recorded in the Domesday Book of 1086 when it was held by Ansculf's son and heir William FitzAnsculf. The motte, or mound, from this Norman castle still stands, but no other features remain of Ansculf's timber fortress. 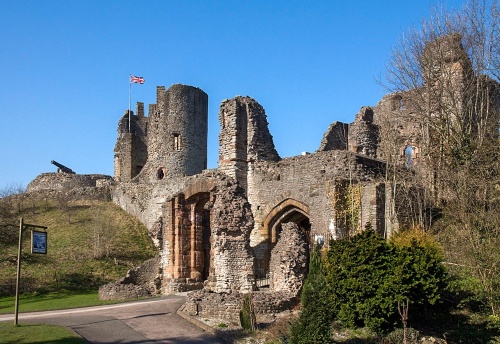 That timber castle was rebuilt in stone by the Paganel family. It was defended by forces loyal to Queen Maud during The Anarchy, the 12th-century Civil War between King Stephen and his cousin Maud. In 1138 King Stephen's men besieged the castle but the defenders held out.

In 1173 Gervase Paganel rebelled against Henry II and the king ordered the castle to be destroyed.

The castle passed to Gervase Paganel's nephew Ralph de Somery, and it was his descendant Roger de Somery who began to rebuild the castle in 1262. Rebuilding continued gradually over the following fifty years by Somery's heirs, who often used the family name Dudley. The striking castle keep dates from this period.

In 1325 Edward II's favourite Hugh Despenser the Younger seized Dudley Castle, but when Edward was ousted by his wife Isabella and her lover Roger Mortimer the castle was returned to the Dudleys.

A later Dudley heir was John Dudley, later named the 1st Duke of Northumberland. John Dudley built a residential range within the old medieval walls. Dudley used the services of the architect William Sharington, so this Tudor complex of buildings is often called the Sharington Range. The Range is one of the earliest examples of Italian Renaissance style in the region.

Unfortunately for John Dudley, he did not have long to enjoy his new residence. He was executed for treason in 1553 for his part in trying to put Lady Jane Grey on the throne. Queen Mary gave the castle back to the Sutton family.

Dudley Castle was held by Royalists during the Civil War. Parliament besieged the castle in 1644 and forced the garrison to surrender. They tore down the defences to ensure that it was of no practical military use, but some of the residential buildings were left intact.

The Earls of Dudley occasionally used the castle and even built a new stable block in the late 17th century. In 1750 a fire destroyed most of the residential buildings. 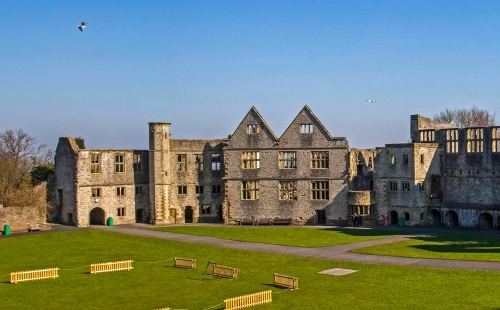 This is the oldest part of the castle and consists of the 11th-century castle motte and the surrounding bailey, or enclosure. The motte stands 9m high and is built of earth, with a rubble core encased in clay. The bailey that holds the motte is roughly oval in shape and measures 80m x 100m. It is surrounded by a dry moat.

The motte was originally topped with a timber palisade but the impressive stone keep we see today was begun in 1262. The keep was partially dismantled in the Civil War but enough remains to show what an impressive building it was. The keep was a rectangular structure roughly 22m x 15m. At each corner were drum towers almost 10m in diameter. Only the north wall of the keep and two drum towers remain standing.

Just east of the keep is the main gatehouse, which was begun after 1262 but incorporates Norman stonework. The gatehouse is defended by two gateways, each with a portcullis. The Suttons later added an outer barbican, giving the gatehouse three layers of defences.

Built by William Sharington for John Dudley around 1540, this three-storey range consisted of a great hall, bedchambers, a kitchen, buttery, servery and storage cellars. This range was destroyed by fire in 1750.

Acting as the first line of defence for the main gatehouse is a smaller Elizabethan gatehouse with a section of curtain wall extending to a round watchtower.

Between the main gatehouse and the motte is the late 17th-century stable block. Other highlights include a pair of Russian cannons captured during the Crimean War and brought here in 1857 for one of the Victorian fetes. 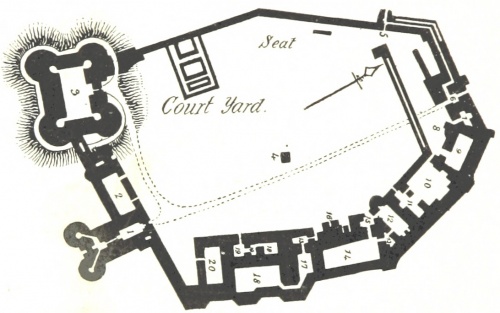 Plan of Dudley Castle circa 1897

The castle and zoo entrance is on Tipton Road, off Castle Hill (the A459) in Dudley town centre. The castle is roughly 3 miles from the M5 (Junction 2). There is a dedicated car park but it is NOT free to park. Dudley Bus Station is a convenient 2-minute stroll from the entrance.

Please note that there is no separate admission to the castle (i.e. you have to buy a ticket to the zoo in order to see the castle). The zoo does host special evening castle tours during the summer months so this may be preferable if you just want to see the castle but aren't interested in the zoo.

The main photo is (c) Derek Bennett. The photos of the castle gatehouse and the Sharington Range are (c) Tony Hisgett. All photos republished with gratitude under a Creative Commons license.

More self catering near Dudley Castle

Accommodation
Self Catering in West Midlands


More self catering in West Midlands