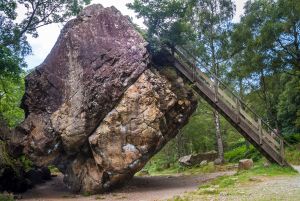 A Lake District icon, the Bowder Stone is a 2000 tonne boulder precariously balanced on one narrow corner. The stone is 30 feet high and 50 feet wide, and it can be ascended via a slender ladder. The Bowder Stone is set in lovely woodland in Borrowdale.

I have to say that ascending the ladder takes a bit of nerve; the incline is so gradual that you have plenty of opportunities to look down! On the other hand, once you are safely to the top of the Stone the views are fantastic.

Where Does the Name Come From?

No one really knows, but one theory is that 'Bowder' comes from the Norse god Baldr, son of Odin and god of light and purity.

Why is it Balanced?

It was traditionally thought that the stone was a glacial erratic; that is, it was dragged into this precariously balanced position by the action of glaciers during the last ice age. Some modern geologists, however, suggest that it was in fact not dragged by glaciers, but fell from the cliffs above and landed on one edge by sheer chance. The hillside above the boulder is littered with other large rocks, but none to match the Bowder Stone's size.

The Stone weighs around 2,000 tons and stands 30 feet high. It is 50 feet in diameter and 90 feet in circumference. The ladder to the top of the stone has been in place since at least 1890 if not earlier.

When Edward VIII died in 1910 his sister, Princess Louise, wanted to create a lasting memorial to the king. The Princess was acting head of the National Trust at the time, and at her urging the Trust purchased Grange Fell, which included the Bowder Stone. The Princess placed a memorial stone atop the Fell, and it certainly is likely that she ascended the ladder to the top of the Stone itself to survey the view.

There is a National Trust car park at Bowderstone, just south of Grange on the B5289, and a trail leads for 600 metres through lovely woodland to the stone. The car park is pay and display, but Trust members can stay for free. 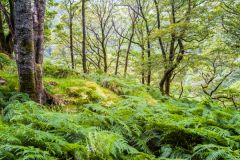 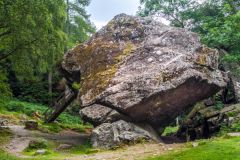 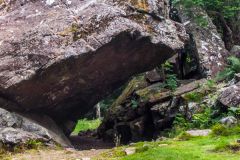 More self catering near Bowder Stone >>