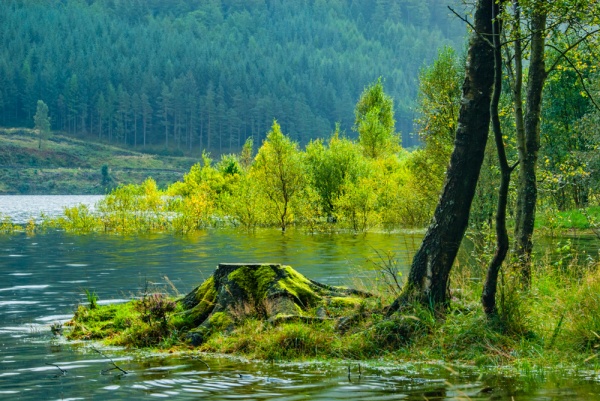 Thirlmere is unique among the major lakes in the Lake District in that it is a man-made reservoir, though it occupies the site of a much smaller natural lake. Thirlmere is bordered by a range of fells on the west and on the east by the bulk of Helvellyn. The reservoir runs roughly north-south, and the A591 road runs down the east side of the water.

Until 1887 there was no Thirlmere, just a natural lake often called Leathes Water, after the family that owned the land. In the late Victorian period, an ambitious scheme was launched by the Waterworks Committee of Manchester Corporation to dam the north end of the lake and create a large reservoir to provide water to the city of Manchester.

The project took 20 years to complete and initially provided up to 10 million gallons of water per day. At least, that was the theory. In practice leakage from the pipes carrying water meant that only 80% of the water reached Manchester. 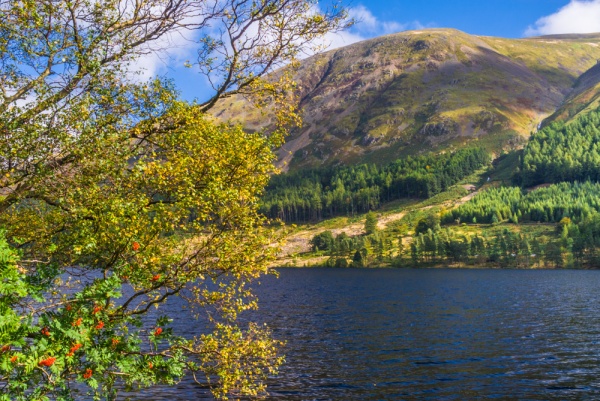 The dam raised the level of the water some 20 feet. Lowland pasture was submerged, but very few houses were lost. A second pipeline raised capacity to 20 million gallons per day, but required the dam to fill the valley still further. The water level was raised to 35 feet above its natural level. Demand kept increasing, and two more pipes were added, the final one in 1927.

The villages of Armboth and Wythburn were submerged, with only the Wythburn church at high enough elevation to remain above the water line.

To improve water retention in the hills above Thirlmere the Manchester Corporation planted large stands of conifers. They worked, but residents and tourists alike complained that the trees ruined the views. To protect the lake from contamination from tourists all bathing, boating, and fishing were banned, and access severely restricted.

Thankfully those restrictions have been eased, and Thirlmere now makes a good starting point for several popular walking routes. It does not have the recreational facilities of most other large lakes. 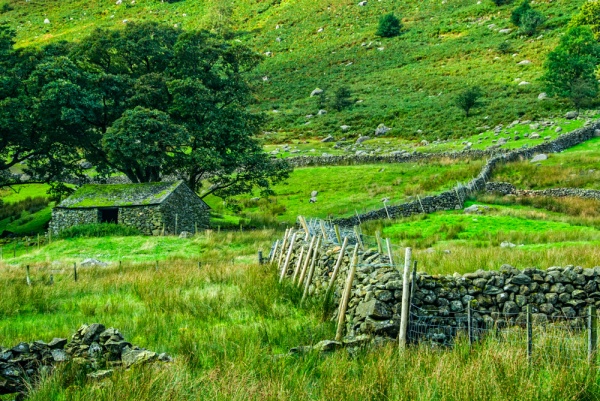 A stone wall and barn at Steel End

There are two parking places on the A591, one beside Wythburn church at the south-east corner of the lake, and one at Helvellyn Gill, about halfway along the east shore. The Helvellyn Gill parking area gives access to the popular trail leading up to the peak of Helvellyn and across the arrete of Striding Edge to Glenridding on Ullswater.

If you turn off the A591 at the south end of the lake you come to another parking area at Steel End, with access to trails leading up to Grasmere Common. Carry on along the lake sore and you will come to a National Trust pay and display parking area connecting to a walking trail up Dob Gill to a series of waterfalls.

Beyond the waterfalls you emerge from the forestry plantation at Harrop Tarn, set in a bowl of hills. Beyond the tarn a trail leads to Watendlath, where the National Trust has a teashop. You can also reach Watendlath from a third parking area at Armboth, about 2/3 the way up the west bank of Thirlmere. There is a fourth parking area at the north-west corner of the lake. 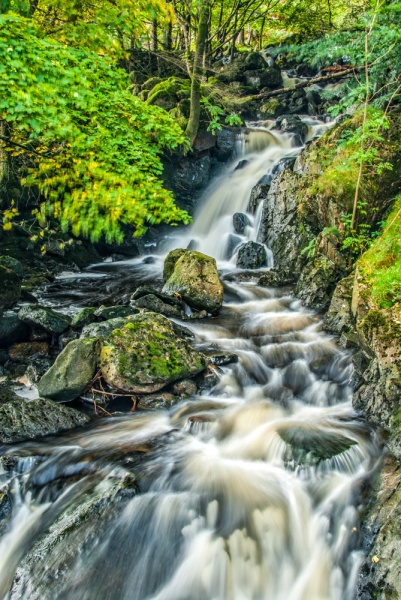 More self catering near Thirlmere

More bed and breakfasts near Thirlmere

Self Catering near Keswick