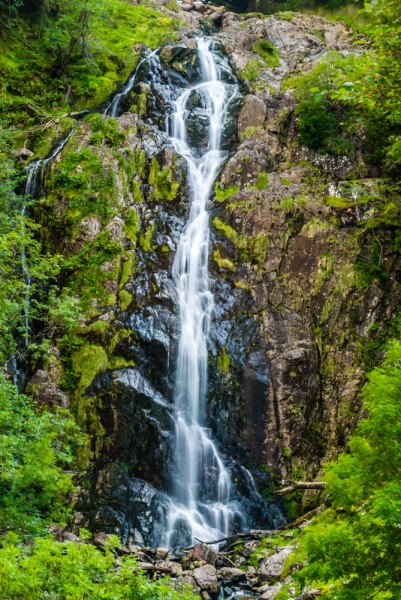 Seathwaite, near Seatoller (not the Seathwaite in the Duddon Valley further west!), is known as the place with the highest annual rainfall in England. Don't let that put you off, though! The location of the hamlet is utterly compelling, with the heights of Great Gable, Greyknots, and Borrowdale Fells towering above.

Take the turnoff at Seatoller, signposted Seathwaite and Styhead Pass. Seathwaite is an extremely popular destination for walkers, which can mean that in the summer months it is difficult to find parking in the hamlet itself, so you may be forced to park along the verge and walk into Seathwaite.

In Seathwaite is a National Trust tea shop. From there follow the signposted path between two barns. The way crosses the River Derwent, and the main trail leads towards Sour Milk Gill, which can be heard at some distance.

Instead, turn south, parallel to the river, and follow the trail that runs along the hillside. The way is not difficult, until the very end when the ground rises sharply and a short scramble is in order. You will come to a wooden gate and a viewing area for Taylor Gill Force.

The setting is spectacular, and though the viewing platform is at some distance from the falls, a bit of a scramble will take you right to the base of falls themselves.

At over 100 feet, Taylor Gill is one of the highest 'forces', or waterfalls, in the National Park, and the effect of the long plume is quite wonderful to behold. There are a multitude of walking trails around Seathwaite, so a visit to Taylor Gill Force could easily be made part of a longer walk. 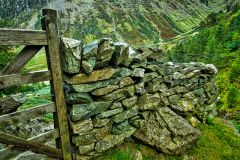 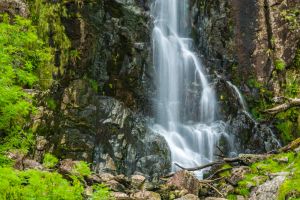 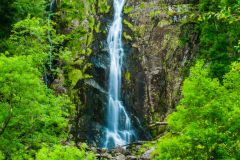 About Taylor Gill Force Waterfall
Address: Borrowdale, Seathwaite, Lake District, Cumbria, England
Attraction Type: Countryside - Waterfall
Location: Park in Seathwaite along the road. Be aware that parking can be difficult during the summer holidays. Follow the path between two barns and cross the Derwent. Follow the trail south for about 1 mile to the falls.
Location map
OS: NY229109
Photo Credit: David Ross and Britain Express

Self Catering near Seathwaite