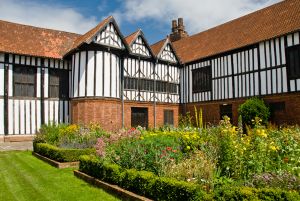 A prosperous market town in north-west Lincolnshire, Gainsborough is situated on the River Trent. The most prominent historic building is Gainsborough Old Hall, a manor house dating to medieval times, situated in the very centre of the town.

Gainsborough was a regional capital of the Saxon kingdom of Mercia. It gets its name from the Gaini tribe. In the mid 9th century the chief of the Gaini was Aethelred Mucill. In AD 868 Alfred the Great married Aethelred's daughter Ealswitha at Gainsborough.

In 1013 the Danish leader Sweyn Forkbeard established his base at Gainsborough Castle, on the site now occupied by Gainsborough Old Hall. Sweyn defeated Ethelred the Unready and became King of England. He was thrown from his horse just a few weeks later and died at nearby Thonock Park in 1014. He was succeeded as king by his son Cnut (Canute).

It was at Gainsborough the Cnut is thought to have made his unsuccessful attempt to turn back the tide. Unlike later histories that portrayed this as an act of arrogance, it is more likely that Cnut was demonstrating to fawning followers that there was a limit to his powers.

From its importance in the Saxon period, the town seems to have dwindled in importance, and by the time of the Domesday Book it had a population of just 80. King John granted Gainsborough a charter to hold a weekly market in 1204.

In 1455 Thomas Burgh purchased the manor and built what is now the Old Hall. This large timber-framed manor is one of the best-preserved and most impressive manor houses in England. The heart of the Hall is a large Great Hall, which played host to both Richard III and Henry VIII.

The town was at the centre of the Civil War conflict; garrisoned for the king, captured by Parliament, only to be retaken by the Royalists. But Parliament was not to be denied and recaptured Gainsborough once more, only to be forced to retreat a few days later. This time they burned the defences as they left, so the town could not be held against them.

The church of All Saints is a superb Georgian building in classical style, built on the site of a 12th-century church once owned by the Knights Templar. The medieval church had to be pulled down in 1736, leaving only the west tower behind. In the porch is a memorial to Richard Rollett, who served as sailmaster on Captain James Cook's second voyage. Gainsborough has strong connections to the Mayflower Pilgrims. Several of those who sailed on the Mayflower worshipped in secret at the Old Hall before taking ship for the New World in 1609.

Novelist George Eliot used Gainsborough as her model for St Ogg's in her novel 'The Mill on the Floss'. She visited the town in 1859 and stayed at what is now the United Services Club on Bridge Street. 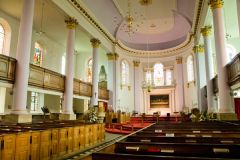 More self catering near Gainsborough >>

More bed and breakfasts near Gainsborough >>