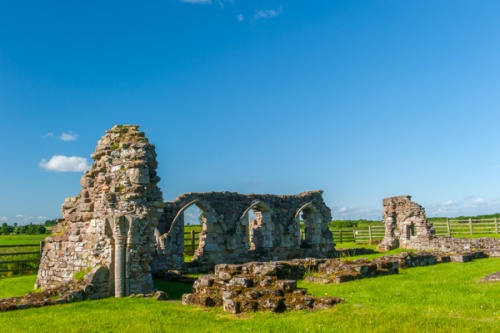 Mattersey Priory was founded in 1185 to support six Gilbertine canons and was dedicated to St Helen. At that time the site was actually an island in the middle of the river, but time and the silting of the river have 'moved' it to the river bank. 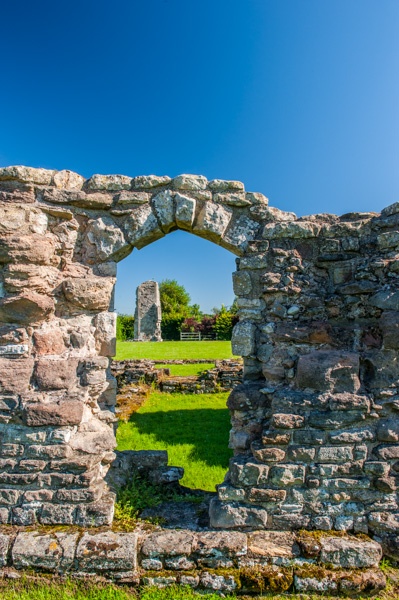 The Priory was damaged by a disastrous fire in 1279 and the priory buildings were never completely rebuilt. It seems likely that there were no lay brothers after the middle of the 14th century - the period of the Black Death.

Mattersey Priory somehow survived until 1538 when it was suppressed by Henry VIII. At that time there were just 4 canons under a prior. The priory lands were later granted by Henry to the Neville family.

The priory foundations make it clear that Mattersey was a very simple community on the Augustinian model. The site was arranged around a cloister on the south side of the priory church. The south range was the refectory, or dining area, while to the east was the dorter, or dormitory, where the canons lived. 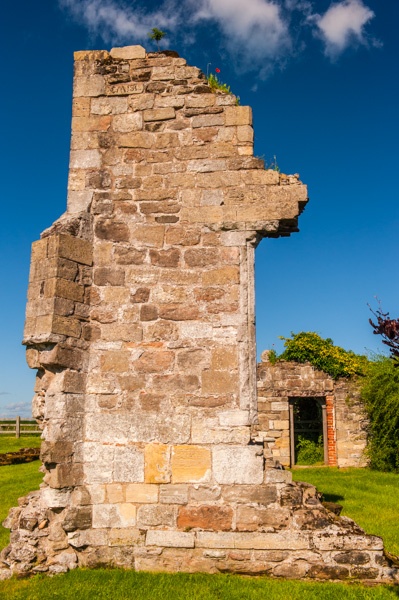 Remains of the 15th-century tower

The west range housed the lay brothers, with a refectory on the ground floor and a dorter above. When lay brothers ceased being an important part of the Mattersey community in the late 14th century the west range was used to offer housing to the poor.

Between the west range and the church was the outer parlour, where members of the community met with outside visitors.

Most of the ruins date to the late 13th century, though the church is earlier. The church was laid out on a rectangular plan, with a choir for canons at the east end and a choir for lay brothers at the west end. In the 15th century, a tower was built over the north wall, overlying part of the earlier lay brother's choir. It seems clear that by this time there were either no lay brothers at all or, if there were, they formed little part of the community focus.

The ground floor of the east range is divided into seven bays. The northern two bays were reserved for chapels and were directly linked to the church. The central three bays were used for the chapter house, where the business of the Priory was carried out. 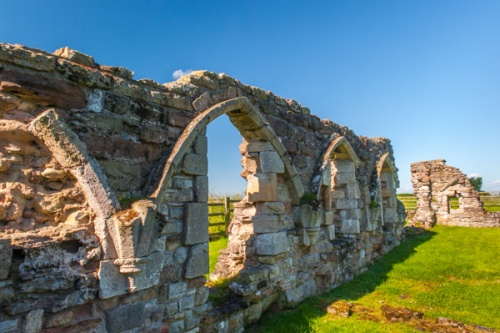 Arches in the south range

The two southern bays formed part of the day room and warming house, where a fire was kept going during the winter and spring. East of this you can still see the paved drain for a first-floor latrine.

The south range had a vaulted ground floor with the canons refectory above on the first floor. The kitchen was a separate building linked to the south range.

The Gilbertine order was the brainchild of Gilbert, a priest of Lincolnshire, who desired to make his parish churches at Sempringham and West Torrington open for use by 'the poor and the godly'. He initially wanted to bestow his gift upon a group of religious men, but he could not find any who were willing to live the strict lifestyle he envisaged.

Instead, he bestowed his gift upon a group of young women, who set themselves up in a house attached to the church of St Andrew at Sempringham. This anchorage developed to become a priory.

As for Gilbert, he was concerned for the care of the sisters. He introduced lay sisters to help the nuns, and lay brothers to take on the heavier work. In 1147 he asked the Cistercian order to take over his followers. The Cistercians refused, so Pope Eugenius III encouraged Gilbert to found a new order, to be called the Order of Sempringham or Gilbertines.

The new order expanded rapidly, and between 1148 and 1154 several houses were added in Gilbert's native Lincolnshire, Yorkshire, and Northumberland. However, though the Gilbertines were popular, they were never rich, certainly not as wealthy as the Cistercians. 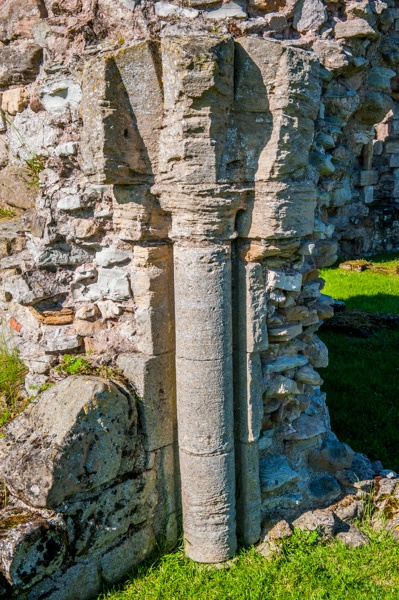 A carved column in the south range

Henry VI did his best to help them by declaring the order exempt from taxation. The best remaining Gilbertine establishment may well be at Malton, Yorkshire, where the Gilbertine priory was incorporated into the parish church.

Most Gilbertine monastic houses supported both nuns and monks, but there is no evidence to suggest that Mattersey was ever a 'double house'.

Mattersey Priory is located in a farm field about one mile from the village. Note that there is no vehicle access to the Priory as it is on private land, with the only approach down a private lane. If you are arriving by car you will have to park in the village and walk down the lane to the site. It is an easy, level walk, through a lovely rural landscape, but it will take about 20 minutes to get there so please be prepared for the walk! There are no facilities on site.

More self catering near Mattersey Priory >>