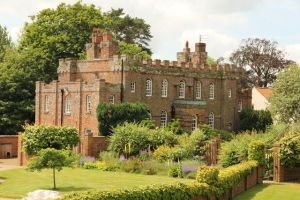 Somersby is a village in the Lincolnshire Wolds, with an origin going back before the Domesday Book of 1086. Its most famous native was Alfred, Lord Tennyson, who was born at the rectory here in 1809, where his father George was the rector.

In 1808 George Tennyson was appointed rector of St Margaret's church in Somersby. Alfred was born the following year, the fourth of twelve children. Tennyson drew on his childhood experiences growing up in Somersby for several of his poems, notably The Babbling Brook and In Memoriam, where he mentions the copper beech tree in the rectory garden. The Babbling Brook is the River Lymn, crossed by a bridge erected in 1820 during Tennyson's youth.

Very little is known about the origin of Somersby's parish church, which was built sometime in the 15th century. Tennyson was baptised in the font of his father's church, and young Alfred used to ring the church bells. In the chancel is a memorial brass to George Littlebury dated 1612, and a memorial to Kath and Robert Burton dated 1742.

There are reminders of Tennyson's connection throughout the church, including personal mementoes and a bust of the poet by his friend, the Pre-Raphaelite sculptor Thomas Woolner. George Tennyson's grave is in the churchyard, and near the church porch stands a 15th-century cross.

The Georgian style Grange stands opposite the church. It is traditionally said to have been designed by Sir John Vanbrugh, the architect of Castle Howard and Grimsthorpe Castle, in 1722. However, there is some doubt as to the actual architect, for a set of drawings held in Lincoln are signed 'Robert Alfray'.

The Grange was home to the Burton family, lords of the manor. It is sometimes mistaken for the much simpler Rectory where Tennyson was born. Just to confuse matters further, the Rectory has since been renamed Somersby House.

Just outside the village in the direction of Salmonby is an old quarry used to provide stone for rebuilding St Margaret's church in the Victorian period. On Tetford Road stands Holywell Wood, now in private hands. Tennyson retreated to the woods upon hearing the news of Lord Byron's death in 1824. There he carved the words 'Byron is Dead' upon a rock.

The village should not be confused with the similarly named 'Somerby'. 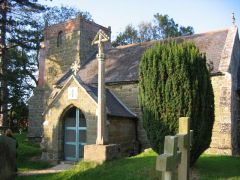 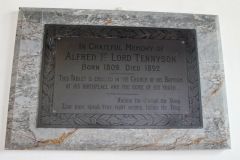 More self catering near Somersby >>

More bed and breakfasts near Somersby >>