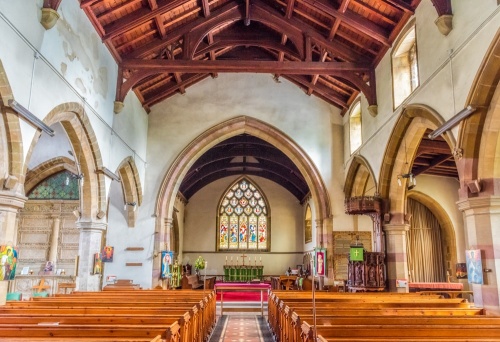 The attractive medieval parish church of Spilsby stands on a rise of ground overlooking the town crossroads and the historic market place. The church has a long association with the Willoughby family, and the ornate tombs of generations of the family lie in the superb Willoughby Chapel. The church is also strongly linked to the explorer Sir John Franklin, who was born in Spilsby.

We do not know exactly when the first church was built on this site but we do know that the present building began in the early 14th century. The earliest church covered the area of the north nave. The chancel was located where the Willoughby Chapel now stands. A few decades later a south aisle was added. This is now the central aisle. At the same time, a chapel dedicated to the Holy Trinity was erected at the east end. This chapel is now the chancel and sanctuary of the present church.

In 1348 the 2nd Lord Willoughby d'Eresby left money to pay for a college of a dozen priests under a Master whose job was to say prayers for Willoughby and his family. The chantry was suppressed in 1547, and three years later in 1550 the income from Lord Willoughby's bequest was used to establish the Spilsby Grammar School. 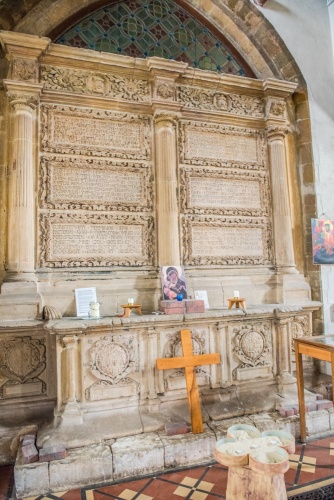 The Willoughby Screen
(rear face of the Bertie monument)

The original chancel was taken over the Willoughbys as their private burial chapel, so the Holy Trinity chantry became the new chancel.

A subsequent bequest in 1529 left money for a tower. The tower holds a ring of six bells, all of them cast in 1774. In 1786 the Spilsby bell-ringers ran 5,040 changes in 2 hours and 40 minutes, an accomplishment recorded on a plaque in the porch.

The church was largely unaltered for the next three centuries until a major restoration in 1878 under the architect William Smith added a clerestory, removed internal galleries, built an organ loft, added a further south aisle and refaced the entire church structure in Ancaster stone.

In the bell tower is a memorial to local men who died in the Boer War. On the north wall are two intriguing memorials; one records the death of Anne Walker in 1854 at the age of 100, while the second remembers Lieutenant Sherrard Lound, who was 'lost at sea Dec 1812!!!'. Why the three exclamation marks in the epitaph? No one knows. Lound served with explorer Matthew Flinders, who named Lound's Island in South Australia after him.

Also on the north wall is a memorial to Florence Barratt, a nurse who died when the luxury liner 'Persia' was torpedoed by German U-boats near Port Said in 1915. 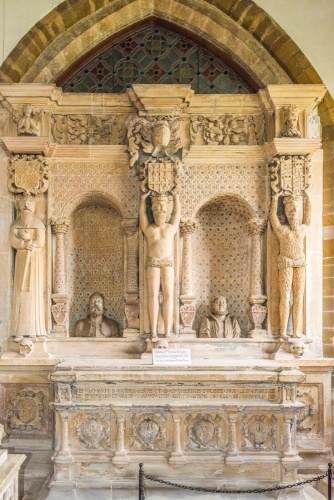 The end of the north aisle (which was the nave of the original church) is blocked by the rear of the Bertie monument (which faces east into the Willoughby Chapel). It is amazing to think that the beautifully carved facade we see from this side was merely the back of the memorial.

The memorial is decorated with heraldic shields, among them the crest of the Bec family, owners of Spilsby and Eresby manors. Most of the monument facade is taken up with Biblical inscriptions, five in Latin and a single one in English.

The highlight of a visit to St James' Church is this wonderful chapel, a place to remember generations of the Willoughby family. Taken as a whole this is probably the finest collection of medieval monuments in Lincolnshire, even though most of the people represented by monuments are actually buried elsewhere.

The earliest tomb is that of John Willoughby, the 2nd Baron (1304-1349). The effigies of John and his wife Joan Rosceline lie under the easternmost window. He is shown in armour, his shield showing the Bec Cross. His feet rest on a lion while Joan's feet lie on a lapdog, a symbol of fertility in the medieval period. The 2nd Baron fought with the Black Prince at the Battle of Crecy in 1346. He left money to found Holy Trinity Chapel in 1348. 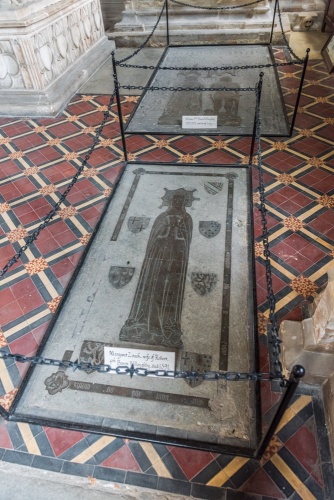 Set into the floor is a brass to Margaret, the second wife of Robert Willoughby, the 4th Baron (d. 1396). Beyond it is another brass commemorating William, the 5th Baron Willoughby (d. 1409) and his first wife Lucy. William had a role in forcing Richard II to abdicate in 1399.

In the south-east corner is the alabaster tomb of John, 3rd Baron Willoughby (d. 1372), a soldier who fought at the Battle of Poitier in 1356. The tomb is decorated with heraldic symbols connected with families linked to the Willoughbys.

Next to the 3rd Baron's tomb is that of Robert, the 4th Baron (d. 1396). His tomb is one of the oldest alabaster memorials in the county. Robert's effigy is shown in armour, his head resting on a great helm decorated with a Saracen's head. Beside him is the effigy of his third wife Elizabeth.

These outstanding Willoughby memorials would be reason enough to visit Spilsby on their own, but we've saved the best for last. At the west end of the chapel, acting as a screen to the north aisle, is the huge memorial to Katherine, 12th Baroness Willougby d'Eresby, Duchess of Suffolk (d. 1580) and her second husband Richard Bertie.

The monument's base is in the style of an altar, lavishly decorated with heraldic symbols. Above this rise three life-sized figures bearing heraldic shields over their heads. On the right is a Wildman of the woods, covered in leaves. In the centre is a crowned Saracen, while on the left is a hermit carrying a staff and prayer beads. in a central recess are recumbent effigies of Richard Bertie and Duchess Katherine in three-quarter length.

Katherine Willoughby was the daughter of a Spanish lady-in-waiting to Catherine of Aragon. She was married at 14 to Charles Brandon, Duke of Suffolk. The marriage eventually made her the step-grandmother of Lady Jane Grey (known to history as the Nine Days Queen) even though she was just 18 years older than Lady Jane.

Duchess Katherine was a leading Protestant reformer and - it was rumoured - a possible seventh wife for Henry VIII after the death of Charles Brandon in 1545. Instead, Katherine married Richard Bertie, her Gentleman Usher and Master of Horse. Their son Peregrine became a favourite of Elizabeth I. 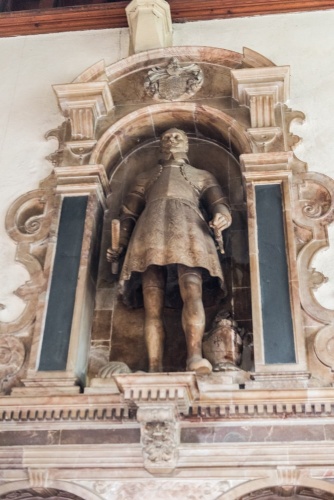 Sir Peregrine's tomb, built in 1600, is the last major Willoughby tomb in the chapel and perhaps the first English tomb to feature a standing effigy of the deceased. This impressive monument is made of alabaster and marble and shows Peregrine Willoughby in armour, his helmet and gauntlets at his feet. Beneath his effigy is that of his daughter Katherine (d. 1610).

Katherine married Sir Lewis Watson of Rockingham in 1609. She died a year later of complications from childbirth. Beside her effigy is a small cradle holding her son, who survived just four days before dying. This is one of the earliest memorials to use this symbolism to depict a mother and infant dying at birth.

At the west end of the church, on what was the original outer wall of the tower, is a memorial to the explorer Sir John Franklin (1786-1847), who was born in Spilsby. Franklin served under Admiral Nelson at Trafalgar and from 1834-1845 he was the Governor of Van Dieman's Land (Tasmania). He is remembered most, however, for his attempts to find the North West Passage linking the Atlantic and the Pacific oceans.

Franklin's ship was trapped in the ice of the Victoria Strait in 1847 and despite numerous attempts launched by Lady Franklin, the ship was never found. It was only 150 years later that the site of Franklin's wrecked ship was discovered. Nearby is a flag presented to the church by the High Commissioner of Canada on the two hundredth anniversary of his birth. 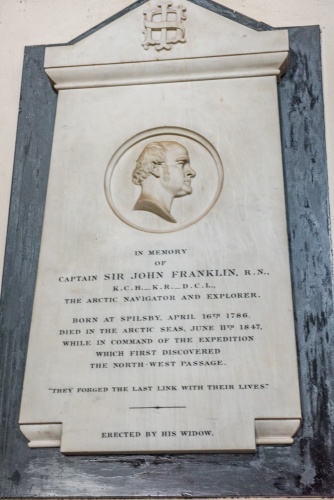 Also nearby is a memorial to Franklin's brother the Hon. Sir Willingham Franklin (d. 1824), also a Spilsby native, who served as Chief Justice of the Supreme Court in Madras. Another brother was Major James Franklin, a prominent geologist and Fellow of the Royal Society, who served with the 1st Bengal Cavalry for the East India Company and carried out a survey of India for the government of Bengal.

St James' Church is a delight, a treasure house of historical interest, and easily one of the finest historic churches in Lincolnshire. 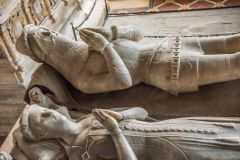 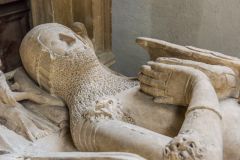 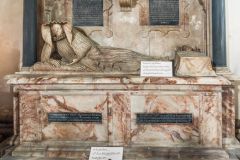 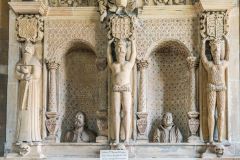 Self Catering near Spilsby