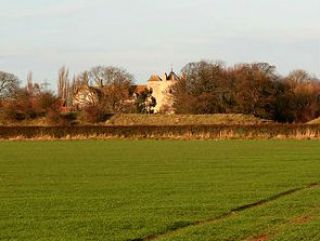 Somerton Castle
The ruins of Somerton Castle stand 2 miles from Boothby Graffoe, south of Lincoln. The remains of two towers still stand, surrounded by a moat. One of the towers has been incorporated into an Elizabethan farmhouse.

The castle was founded by Anthony Bek in 1281. Bek became Bishop of Durham just 2 years later, and gave Somerton to Edward I. Somerton Castle's finest hour came in 1360, when King John of France, then a captive of Edward III, stayed here.

King John was taken prisoner at the Battle of Poitiers and was kept captive for 6 months. He was allowed a full retinue and kept in comfort, so it was not a difficult confinement. An outer earthwork surrounding the castle may have been built for extra security during John's time at Somerton.

The castle is a typical early Edwardian design, with circular towers at the corners of a rectangular layout, with a dry moat around the structure.

The castle is private hands, and not usually open to the public. The best you can do is view the towers through a stand of trees from the road that passes the castle. The road actually goes through the site, between the main complex of buildings and a large, moated enclosure.

More self catering near Somerton Castle >>