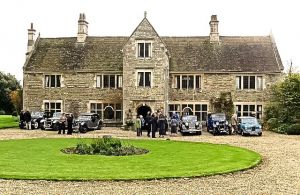 Fulbeck Manor
Fulbeck Manor is a much-altered house begun in Tudor times, but now largely Georgian in character. The Tudor bits are hidden away in the servant's wing, but a panelled hall, good period furniture, and a drawing room with large bay windows remain for visitors to enjoy.

Fulbeck Manor is built of limestone rubble dressed with ashlar, under a gabled slate roof. The house stands 3 storeys high including garrets, with a 5 bay front. Thee are large mullioned windows, most 19th century, but echoing the 17th century design of the house.

The interiors feature portraits of the Fane family, who have lived here for over 400 years. The most impressive feature is a 17th century staircase with spiral balusters.

Fulbeck is generally open by written appointment only or for the annual Heritage Open Days. Don't confuse Fulbeck Manor with the 'other' historic house in the village, 18th century Fulbeck Hall.

More self catering near Fulbeck Manor >>