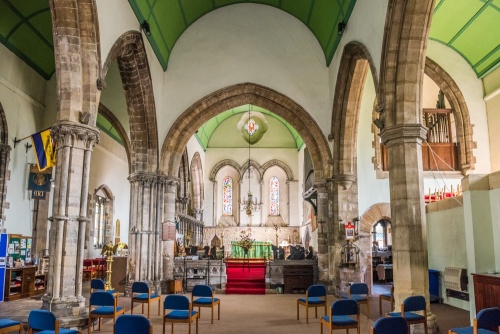 St Mary-le-Wigford church dates to the late Saxon period, with a tall tower that may date to 980 AD, and an Early English nave. The bulk of the architecture is early 13th century, probably inspired by the contemporary building of St Hugh's Angel Choir in Lincoln Cathedral.

Set into the west wall of the church is a Roman gravestone which was later used as a dedication tablet by the Saxon founder of the church, a man named Eirtig.

Eirtig wrote his dedication from bottom to top, inviting readers to raise their eyes to the heavens above. The Latin text of the dedication is much worn, but appears to translate as 'Eirtig had me built and endowed to the Glory of Christ and St Mary'.

The church nave is of three bays, with a north aisle, and the chapel of two bays with the addition of a north chapel. 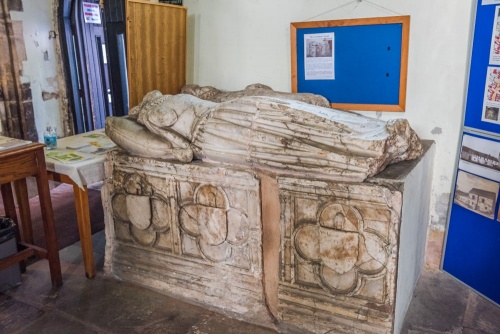 Inside the church are several memorial brasses, including one commemorating Mayor William Horn, which dates to 1469. A brass for fishmonger John Hobson (d 1525) shows the tools of his trade, an axe and a knife. The most impressive memorial, however, is the 1618 tomb cover to Sir Thomas and Lady Grantham.

The font is 14th century and boasts some intricate carving detail.

Outside the west tower is The Conduit, a scheduled ancient monument that shows where a medieval channel once brought fresh water to the lower city.

The church has limited opening hours, but was open the last time we visited and we had a lovely chat with the vicar, who was extremely knowledgable about the history of the building. 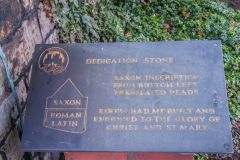 More self catering near St Mary-le-Wigford