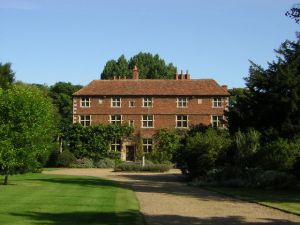 Aubourn Hall
Aubourn is a pretty Stuart brick house standing above a canal. The present house dates to around 1628 and was built as a series of small wood-panelled rooms. Features include a nicely carved Jacobean oak staircase, and an excellent collection of Georgian furniture.
History
There was a moated manor house here in the Middle Ages. That house was built of timber, but it was rebuilt in brick during the Tudor period for Sir John Meres, possibly with the aide of architect John Smythson. It stands 3 stories tall, with square windows creating a very symmetrical frontage.

The Hall was owned by the Nevile family for much of its history. The Neviles first came to Aubourn in 1386 and still own land in the village. The Neviles were involved in help Methodism prosper in this area in the early 19th century, and allowed an early Methodist Sunday school to be held at the Hall.

The house has very limited opening times. The gardens, however, are open regularly throughout the summer months, and at other times for pre-arranged group tours. The Hall is also operating as a wedding venue.

More self catering near Aubourn Hall >>