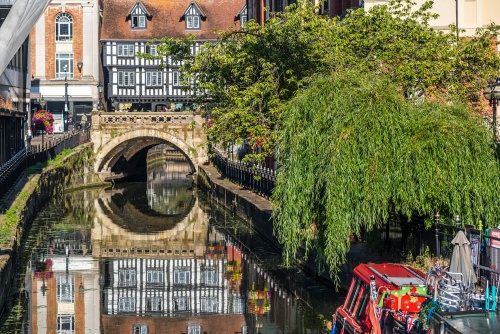 A unique medieval relic, High Bridge spans the River Witham near the bottom of High Street. The bridge is the oldest bridge in England that still has houses built upon it. The others are Pulteney Bridge in Bath and Frome Bridge in Somerset. High Bridge was built around 1160 to replace an earlier ford across the Witham.

In the Tudor period, houses were built upon the western side of the bridge. The narrow opening created by the arch of High Bridge has been called the 'Glory Hole'; its small, crooked arch sets a limit on the size of boats which can successfully navigate the Witham.

In the medieval period, the bridge opening was also called the 'Murder Hole', for it was said that bodies thrown into the Witham would wash ashore at this spot. 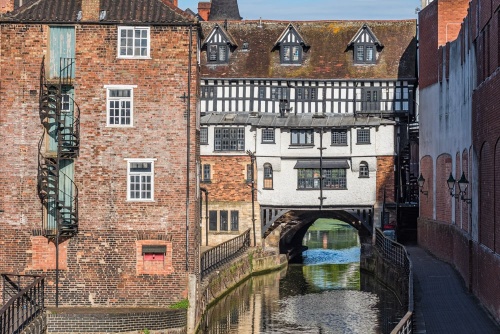 High Bridge from the west

The first bridge on this spot probably dates to the 1st century AD, when the Roman long-distance road known as Ermine Street crossed the River Witham on a timber bridge. The first stone bridge was built around AD 1160, replacing an earlier timber structure.

Around AD 1235 a heavy platform was erected over the bridge to support a chapel, dedicated to St Thomas Becket. The chapel was demolished in 1763 to be replaced by a water conduit topped by a stone obelisk. The obelisk was removed in 1939 due to worries about its weight. A recreation of it can be seen at St Mark's shopping centre: the pineapple, civic shield, and one piece of the dolphins are original. 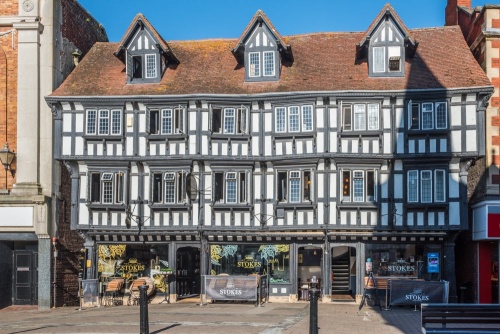 At the same time as the obelisk was erected a large vaulted chamber was built into the sloping ground north of the bridge, and the road laid over the top of the chamber. These vaults are now sealed under the road surface.

The bridge now supports a row of timber-framed shops erected in 1550. Steps lead down beside the bridge to a riverside walkway, where you can more easily see the bridge structure from beneath.

More self catering near High Bridge