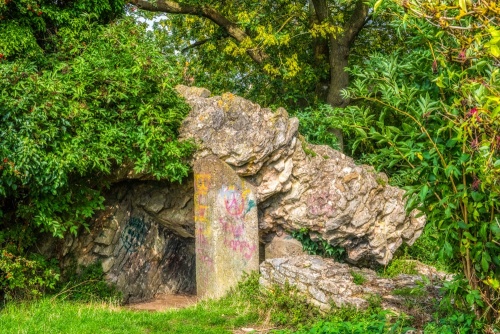 Sleaford Castle is a ruinous 12th-century moated castle on the edge of central Sleaford, built by the Bishop of Lincoln and held by them for over 400 years. The castle fell out of use in the middle of the 16th century and now consists of earthworks and a very small section of masonry wall.

Sometime between 1123 and 1139 Alexander de Blois, the powerful Bishop of Lincoln, built a fortification at Sleaford in southern Lincolnshire. Curiously, the Bishop chose not to build the castle on high ground but in a low-lying fen. The location may have been prompted by the fact that an earlier residence existed on the site. The surrounding flat landscape also made it difficult for an enemy to approach undetected.

Though it was called a castle, Sleaford Castle was, in fact, more of a fortified manor house than a military strongpoint. The Bishop used Sleaford Castle to store agricultural produce from his vast estates and as an administrative centre. It also provided a comfortable residence when he visited southern Lincolnshire. 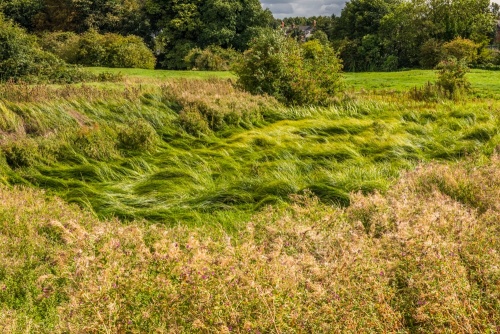 As part of the building project, the Bishop dammed the River Slea to create a large pond. The dam controlled water flow to a mill, and the pond was stocked with fish for the Bishop's table. The marshy area around the pool was perfect for growing reeds for making thatched roofs. Beyond the castle walls was an orchard to help feed the castle inhabitants.

We do not know exactly how the castle looked in its heyday but it was probably similar to Newark Castle in Nottinghamshire, also built for Bishop Alexander of Lincoln at about the same time.

The castle consisted of an inner and an outer moat surrounding an outer bailey. The outer bailey is L-shaped and was defended only by a moat fed from the nearby River Slea. The moat is 55-60m long and 15-20m wide. Within the bailey, you can see the outline of a tithe barn (see below).

A drawbridge crossed the inner moat and led to a fortified gatehouse defended by two portcullises. The gatehouse gave access to the rectangular inner bailey where there were service buildings and a square stone keep. 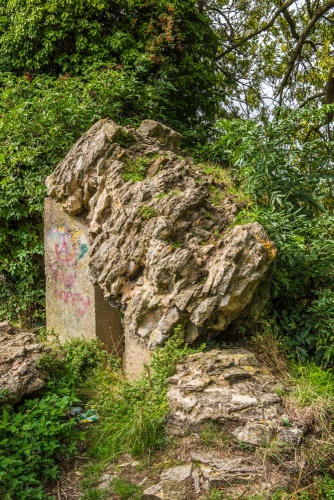 Remnants of the north-east corner tower

Sleaford Castle never came under attack, but it was the scene of historical drama on several occasions. In 1139, during the civil war between King Stephen and Queen Maud known as The Anarchy, King Stephen forced the Bishop of Lincoln to hand over the castle keys as he wasn't convinced of the Bishop's loyalties. The Bishop complied and the incident passed without mishap.

A similar situation occurred during the reign of Edward II in the 1320s when the King forced the Bishop of the day to surrender control of the castle to the Crown. The castle was rebuilt by Bishop Alnwick in the 15th century. The only other moment of note in the 15th century came in 1431 when Bishop Fleming died at the castle. 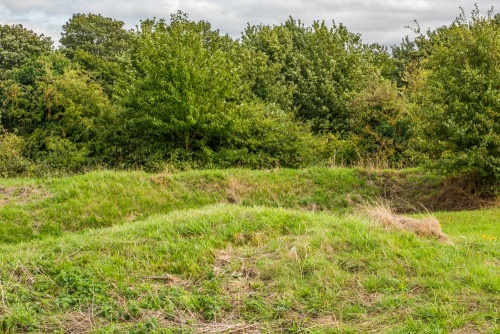 Earthworks are all that remain

Sleaford Castle played host to two monarchs over its lifetime. On 14 October 1216, King John arrived at Sleaford after his disastrous crossing of The Wash, where he is reputed to have lost his baggage train. The king was gravely ill but managed to make it as far as Newark Castle before he died a few days later. Henry VIII visited with Queen Catherine Howard twice in 1541 and is thought to have held a Council meeting in the castle.

By the time of Henry VIII's visit, the castle was in poor condition. It passed from the Bishops of Lincoln to the Duke of Somerset in 1544, and an inventory of 1555 recorded that it was still habitable and able to be defended.

The castle was later seized by the Crown and promptly allowed to fall into a state of decay. Lead was stripped from the keep roof and timbers salvaged for other building projects. Stone from the castle was used to build the Manor House and other local buildings.

In the late 16th century it passed to the Carre family, but by 1604 it was described as 'the late fair castle'. In 1720 sections of the towers and walls were still standing.

Today the only surviving stone feature is a part of the corner tower in the north-east part of the site. The remainder of the site consists of earthworks and the outlines of foundation walls covered by turf. The moat is still very clear along one side of the site. 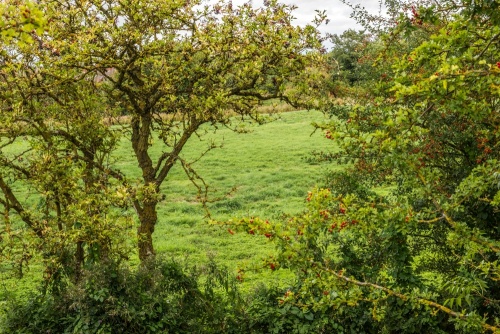 The castle from the south

One impressive feature is the outline of a tithe barn on the southern side of the castle site. The scale of the barn is staggering. It measured some 40 x 15 metres, making it the largest in Lincolnshire and a clear indication of the wealth of the Bishops.

The Bishop's poorer tenants paid rent in kind, that is, in goods rather than money. The Bishop needed a place to store those rents, thus a large barn was needed. Attached to the barn was a cattle shed and a byre. East of the barn is an earthwork that may have been part of a dovecote for keeping doves and pigeons for food.

Also on the castle site was a constable's house (a constable was an official who administered the castle in the absence of the owner).

Sleaford Castle is one of just three enclosure castles in Lincolnshire. 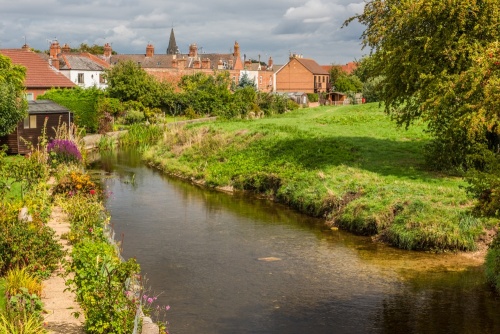 Nine Foot River runs across the northern edge of the site

The castle is not well signposted (in fact, we didn't see any signs and had to go on quite a search around the town to find it). We understand that Sleaford Council is interested in developing the castle site as a tourist attraction so hopefully better signage is in the plans. There is no parking area, so the easiest way to reach the castle is probably on foot from the town centre.

The castle is off the east side of Castle Causeway. From Sleaford Museum of South Gate cross the road and follow Station Road, past the rail station to the end of the road. A footpath leads beside the railway to Castle Causeway. Turn right when you reach Castle Causeway and you will find the castle site beyond the playground area on your right.

Alternatively, from the junction of South Gate and West Gate in the town centre just follow West Gate to the left bend where it turns into Castle Causeway. Follow Castle Causeway across West Banks and you will come to the castle site on your left.

More self catering near Sleaford Castle