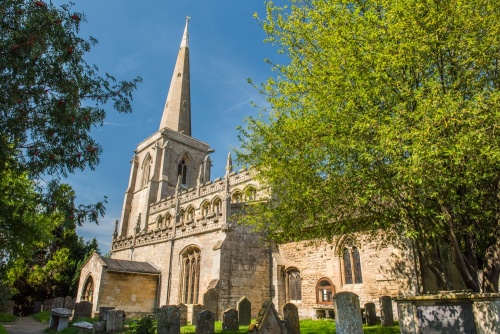 When the Romans invaded Britain in AD 43 they found an existing settlement at Ancaster, in what is now Lincolnshire. The Romans used the strategically important site to establish a marching camp and later, a permanent fort, and they built the major road of Ermine Street through the settlement to link London to the north. A town grew up beside the fort and was served by a pagan shrine.

When Christianity arrived in Britain the site once occupied by the shrine was used for a church dedicated to St Martin of Tours, a saint often identified with Roman sites. St Martin was a Roman soldier who converted to Christianity and became the Bishop of Tours.

In 1831 a stone slab with a small altar at one end was unearthed in the churchyard. The stone once formed part of a public shrine or temple. On the slab was a carving depicting the Deae Matres, or Mother Goddess. The original carving is in the Grantham Museum but a replica stands on the churchyard wall. 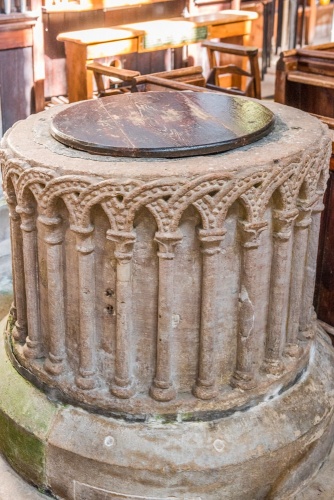 Another Roman discovery arrived in the 1960s when the stone covering a medieval grave was found to have a Latin inscription to the Roman god Viridio. There have been no other recorded mentions of Viridio in the Roman world so we have to assume that he was a locally-important god.

Ancaster is not recorded in the Domesday Book and the first record of a church comes from the Norman period - probably at the very end of the 11th century. The church was rebuilt in the 14th century but it retains its original Norman chancel and nave.

St Martin's Church enters the stage of history in 1200. Bishop Hugh of Lincoln, later to be canonised as St Hugh, died in London. A cortege carrying his body to Lincoln for burial departed London on 18 November. It stopped each night along the way to make camp, and the final stop was here at Ancaster, where the Bishop's body lay before the altar all night. To commemorate this event the side chapel is known as St Hugh's Chapel. 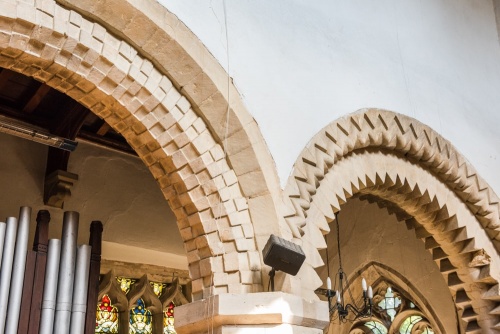 The south porch dates to 1717 and replaced an 11th-century porch destroyed in an earthquake in 1185. You can clearly see the roofline of the original porch on the exterior wall.

Within the porch are two medieval effigies of priests in vestments, one holding a chalice. These are almost certainly memorials to two early rectors of Ancaster. Both effigies have suffered at the hands of religious reformers.

Inside the church one of the first things you see is the Norman drum-shaped font, decorated with wonderful interlaced arcading.

The nave dates to the period 1125-1140. The north arcade is a delight. There are four bays, and the arches are progressively more and more elaborately carved, from a plain arch at the west to a moulded arch for the second bay, then a chequered pattern on the third, and finally a beautifully carved chevron decoration on the fourth arch. 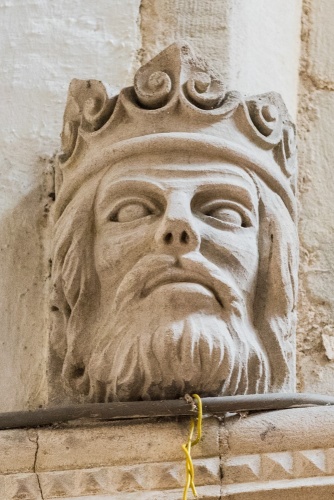 Head of Edward I, chancel arch

Perhaps the most striking carving in the church is the chancel arch. This is not the original Norman arch; it was rebuilt in the 13th century with this wonderfully carved example in Early English style, decorated with nail-head ornaments on the capitals. On each side of the arch are carved heads, one of a king and the other of a queen. These may represent King Edward I and Queen Eleanor.

Other 13th-century features include the blocked north doorway, the south doorway, and a lancet window in the north aisle.

There are numerous memorials to the local Allix family, dating to the 18th century. Other memorials we noticed include several to the Brown family, and to Elizabeth Long, who died in 1743. Her memorial includes a touching epitaph to her daughter Ann, who died in infancy.

She was not the only woman of Ancaster to have her children die young; another memorial; commemorates Elizabeth Brown (d. 1764) at the age of 37, and two of her sons, who died in infancy.

'A loving wife and tender mother dear,
For so was she that now lies sleeping here.' 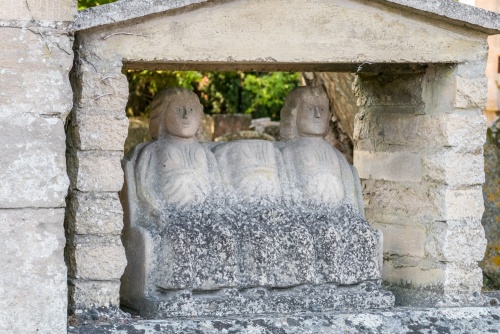 Replica of the Roman altar carving

Probably the most impressive monument in the church is a wall tablet to Elizabeth Roe of Sudbrooke (d. 1765). The memorial was sculpted inscribed by T. King of Bath, who obviously felt that adding his signature inscription might be good for business.

The high altar is of Ancaster stone, as is the altar in St Hugh's Chapel, which was given by the Gregory family, who owned the Ancaster quarry.

Tucked out of sight in the vestry is a carved head in the shape of a Green Man.

The west tower was added in the 14th century and has several grotesque carvings and four practical gargoyles to carry rainwater away from the roof. On the north side of the tower is a Sheela-na-gig carving; a pagan symbol of fertility depicting a woman displaying her genitals.

St Martin's Church is a delight, full of interest and bursting with history. The church was open when we visited and as far as we can determine is usually open daylight hours to visitors. 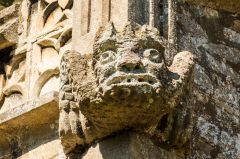 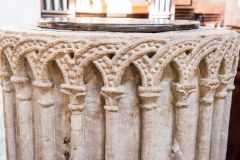 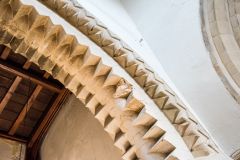 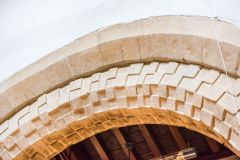