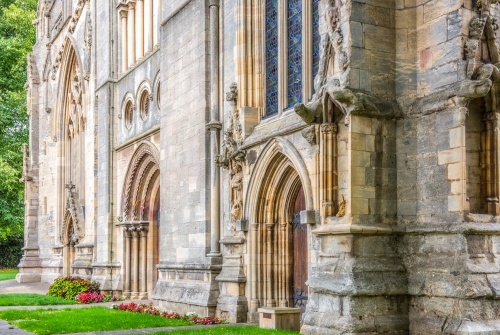 Sleaford's attractive parish church stands on the east side of the Market Place opposite the Carre Hospital almshouses. There has been a church here since the late Saxon period when it formed part of a manor owned by the 1st Bishop of Lincoln.

The Domesday Book of 2106 records a priest and a church. We do not know that early church's dedication, but by 1140 it was recorded as being dedicated to St Denys.

Around 1180 the Saxon church was rebuilt, giving us the basis of the building we see today. The oldest part of the church is the tower, which is topped by a broach spire added between 1200-1220. This is one of the earliest examples in England of a broach spire (a spire much smaller in plan than the tower that supports it). 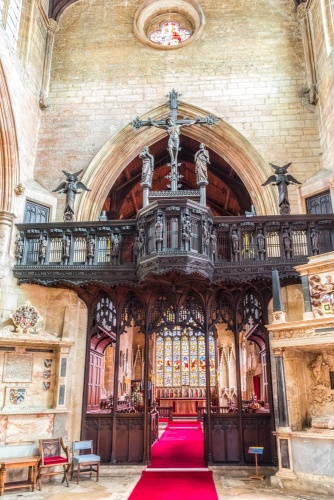 The first recorded vicar of St Denys' Church was Henry de Swinderby, who took office in 1277. Around 1370 the nave was rebuilt in Decorated Gothic style. The rebuilding included the wonderful window tracery that is one of the highlights of the church. The north transept and Lady Chapel were added around 1380.

Fashions change, and by 1430 the chancel was considered outmoded and was rebuilt in the then-popular Perpendicular Gothic style. A clerestory was inserted into the nave at the same time. Around 1477 the Holy Trinity Guild established a chapel at the east end of the south aisle. The Guild chapel was removed during the Reformation in the following century.

The next major change was the addition of galleries in the middle of the 18th century. Once again fashions changed and the galleries were removed in 1853. Disaster struck - quite literally - in 1884 when the tower was struck by lightning and had to be completely rebuilt. A 15th-century window removed during the rebuilding was preserved in the south-east corner of the churchyard.

From 1918 the late 14th-century rood screen was restored by Sir Ninian Comper, who retained the medieval base of the screen but added a new rood. 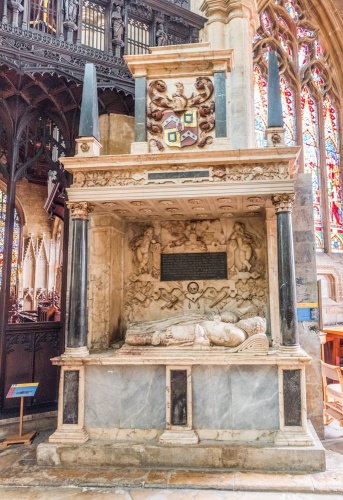 The chancel dates to the first quarter of the 15th century and is the only part of the church in Perpendicular style. The elegant communion rails are thought to have been designed by Sir Christopher Wren for Lincoln Cathedral.

On the south side of the chancel arch is a richly-carved memorial to Sir Edward Carre (d. 1618). The memorial was designed by Maximillian Colt, the master carver to the court of James I. Unfortunately the memorial was damaged during the Civil War.

On the north side of the chancel arch is a memorial to Robert Carre (d. 1590), the father of Sir Edward Carre. The Carre family were major benefactors of the church during the 16th and 17th centuries and were responsible for the Carre almshouses that stand opposite the church. The Carre family burial vault lies under the raised platform in the north transept. 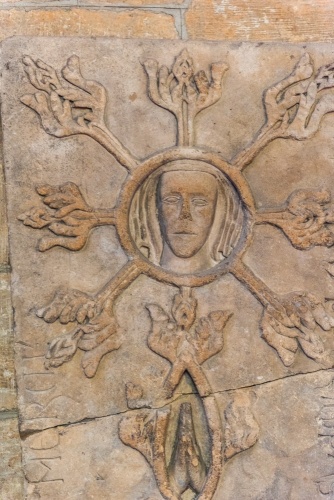 As if to take a break from all the Carre memorials there is a very good 1771 wall tablet to Richard Moore, Gentleman. Much smaller and plainer is a brass commemorating Theophilus Britain, who died in 1696.

The baptistry is entered through a striking scissor arch, built in 1853 to offer better support to the tower, which had started to lean. In the baptistry itself is a 14th-century octagonal font.

Look for an amusing carving of a grotesque 'mouth-puller' human head on the nave arcade.

St Denys' is a wonderful historic building, full of interest. The west facade is an outstanding example of medieval craftsmanship and the outstanding Carre memorials make it well worth a visit. 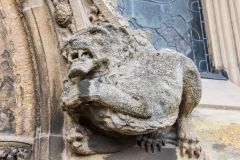 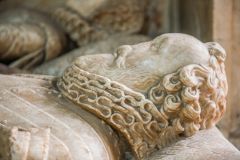 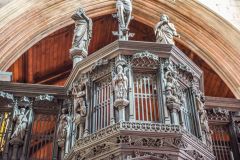 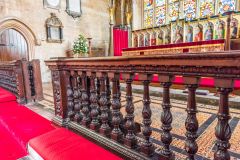 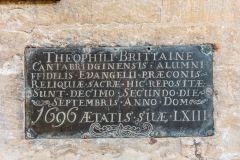