Sherwood Forest and the Major Oak 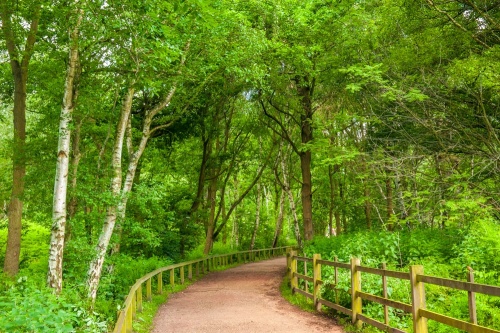 Sherwood Forest is a large area of mixed oak and birch near the Nottinghamshire village of Edwinstowe. The Forest is best known for its links to the legend of Robin Hood, and the woodland we see today is the last vestige of the medieval greenwood that Robin Hood and his merry men would have known.

Stories tell that the outlaw and his companions would meet at the Major Oak, one of over 1,000 ancient oak trees in the Forest, making this one of the best places in Europe to see ancient oak woodland.

A circular footpath leads from the visitor centre through lovely woodland to the Major Oak and back again, a distance of about 1 mile. Along the signposted walk there are information panels explaining the rich ecology of the Forest, focussing on woodland mammals, spiders, flowers, fungi, moths and butterflies, woodland management, insects and birds. Sherwood Forest covers 420 hectares (1037 acres). 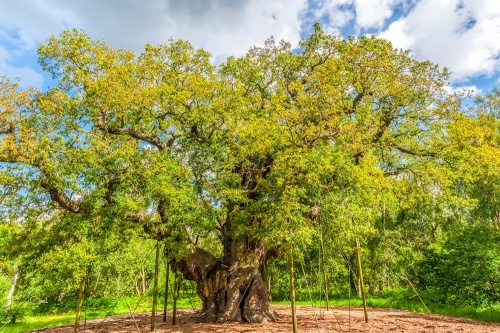 One of the last great oak trees that made up Sherwood Forest over the centuries is the Major Oak, which is thought to be over 1,150 years old. To put that into perspective, the Major Oak was already a mature tree when William the Conqueror crossed the English Channel in 1066. It was positively ancient by the time Robin Hood was supposedly active in Sherwood Forest in the 1190s.

This gigantic tree measures some 10m (33 feet) around the base and its branches create a canopy that spreads over 28m (92 feet). It is estimated to weigh about 23 tons. Though several of its branches have had to be propped up, the tree is still growing, aided by the fact that the area around it is kept clear of competing trees.

It is also possible that the tree is made up of three or four smaller trees that fused together as they grew upwards, creating a hollow interior. The hollow interior made the Major Oak unattractive to foresters, so they did not cut it down for lumber. It is also possible that its oversized trunk is the result of ancient pollarding, where growing trees were cut back every 40 to 50 years, causing the trunk to grow very wide.

The Major Oak is best known for its links to the legend of Robin Hood, for it was under the Oak's spreading branches that Robin and his men would meet before setting off on their adventures. 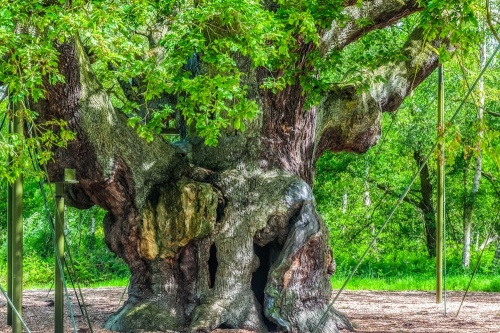 A closer look at the Major Oak

The name of Robin Hood is forever linked to Sherwood Forest. According to legend, it was here that the famous outlaw and his band of merry men sheltered under the greenwood, out of the reach of the wicked Sheriff of Nottingham. But is there any truth to the story?

The short answer is probably yes, though the story has been embellished and enhanced over the centuries until it is hard to separate fact from fiction. Some later versions of the story suggest that Robin Hood lived in Sherwood Forest during the reign of King Richard the Lionheart, at a time when his younger brother John acted as regent during Richard's absence on Crusade.

Unfortunately for this version, the earliest documented evidence of a 'Robert Hode' is in 1225, long after this time. Robert Hode fled from the jurisdiction of the Archbishop of York and court documents mention his name nine times before 1234, but there is no record that he was ever caught Could a Yorkshire outlaw have fled south to Sherwood forest? If so, then his sworn enemy, the Sheriff of Nottinghamshire, was probably Eustace of Lowdham, who took office in 1232 after serving as a deputy sheriff. 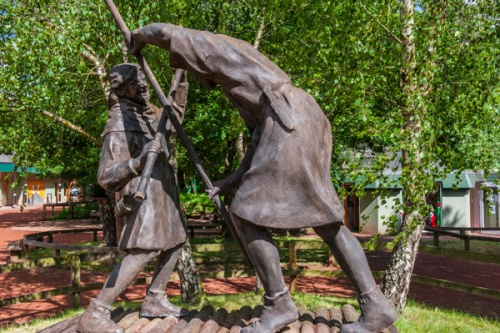 Robin Hood and Little John sculpture at the visitor centre

Some early stories of Robin Hood contain references to older, pagan beliefs, so Robin Hood and his merry men came to represent a tie to the past for common folk. The stories span several centuries and it seems likely that more than one outlaw took the name of Robin Hood.

By the year 1300 court documents show at least eight people called 'Robinhood', as the term became used by court officials to refer to outlaws in general rather than one particular person. It is not hard to imagine that at least one of these men used the Major Oak as a meeting place.

By 1400 the character of Robin Hood appeared regularly in folk plays and May Day celebrations across England. The legend became entwined with the Green Man, a woodland spirit or 'wild man of the woods'.

The first mention of the Major Oak comes from the 18th century when it was used as a pen for fighting cocks. Cockfighting was a popular pastime in the Georgian period (though by this time it was illegal), and fighting birds were stored in wicker baskets in the tree before being brought out to fight for their lives in front of spectators. That explains the tree's first known name, the Cockpen Tree. 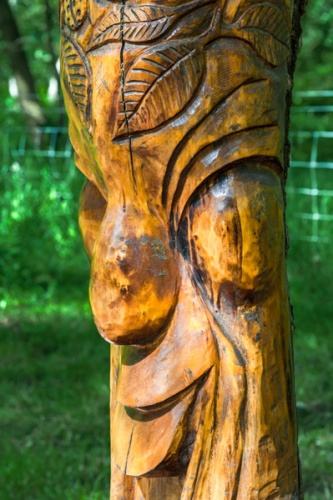 Tree sculpture on the woodland trail

The tree really came to public attention in 1790 when a local historian named Major Hayman Rooke published 'Remarkable Oaks in the Park of Welbeck in the County of Nottinghamshire'. The book was popular enough that the oak was named for Major Rooke and became the Major's Oak. Eventually, the link to Major Rooke was forgotten and it was simply called the Major Oak, even though that gives the impression that it was so-named because it was the largest oak in Sherwood Forest, which was not the case.

During the Victorian period it was called the 'Queen's Oak', or simply, 'The Queen', probably a reference to its size and majestic stature. It became a popular destination for tourists, and the influx of visitors was enough that the Dukeries Hotel in Edwinstowe was built to serve this tourist trade. Visitors would stay at the Hotel and others like it, and take regular horse-drawn carriages into the Forest to the Major Oak. 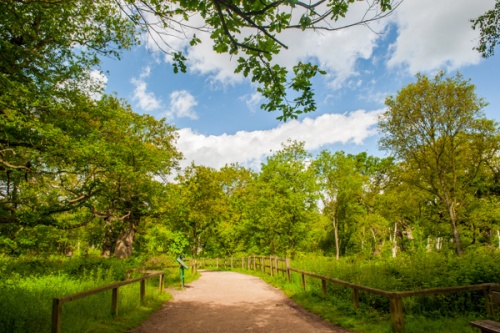 The return leg of the woodland trail

Sherwood Forest was named a Site of Special Scientific Interest (SSSI) in 1954. The designation recognises the fact that the Forest boasts one of the best examples of oak/birch woodland in England. The Forest also has large areas of acid grassland and open heath, which provides a habitat for many insects and spiders.

Miles of walking and cycling trails suitable for all ages and levels of fitness dissect the woodland. There are family activities such as bug hunts and woodland crafts. The Forest also hosts an annual Robin Hood festival every summer. The best place to find out more is at the modern visitor centre near Edwinstowe village, where you can enjoy a popular cafe, pick up trail guides, and learn more about the Forest and the activities it has to offer.

Note that there is a charge for the main visitor car park (free for RSPB members).

More self catering near Sherwood Forest

Self Catering near Edwinstowe