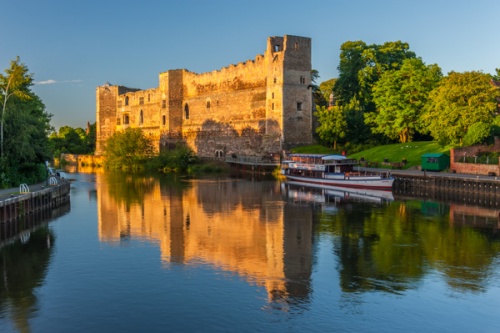 The largest gateway of any castle in England graces this largely 12th century fortress. The castle once belonged to King John, and it was here that he died in 1216 after his infamous "surfeit of peaches". 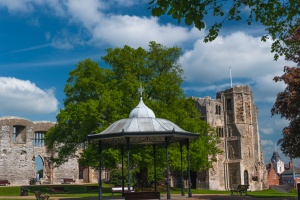 The town of Newark grew up around an important crossing of the River Trent, where the Fosse Way and the Great North Road converge. There was a fortified Saxon manor here at least as early as the 10th century, but that was replaced by a motte and bailey earthwork fortress around 1073. That simple defensive structure was rebuilt as an impressive stone castle in 1133 by Bishop Alexander of Lincoln.

Known as Alexander the Magnificent, the powerful Bishop also built castles at Banbury and Sleaford, but only Newark has survived. 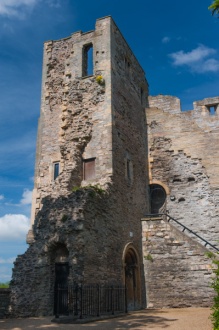 The southwest tower - is
this King John's death place?

Death of a King

The most famous even in the castle's long history came on 19 October 1216, when King John died here, after consuming the infamous 'surfeit of peaches'. Tradition suggests that the king died in the south-west tower, but it is more likely that he was staying in an apartment within the grand gatehouse that dominates the site today.

After John's death one his knights, Robert de Gaughy, seized the castle and held it against the new king, Henry III. Royal forces besieged the castle and forced de Gaughy to surrender after 8 days. The terms were hardly onerous; he was allowed to leave freely after agreeing to pay a fine of Â£100.

The castle was successfully besieged in 1217 by the Dauphin Louis during his abortive bid for the English throne, but after the coup failed the castle reverted to the Bishopric of Lincoln.

In the late 13th century the castle defences were strengthened with a high curtain wall on the river side. This curtain wall is largely intact and gives Newark its imposing outlook. In the 15th and 16th centuries the wall was pierced with large windows as the castle ceased to be a fortress and became more of a comfortable residence. 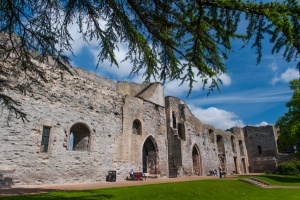 Throughout the medieval period Newark remained under church control, but with the Reformation that changed. In 1547 the castle was seized by the crown and sold into private hands. Among the famous names to stay at Newark are the Earl of Belvoir (Thomas Manners) and William Cecil, Lord Burghley.

Newark was held for the king during the Civil War. Because it controlled one of the main north/south routes the castle was considered of immense strategic importance and Parliament besieged it on 3 occasions.

Finally in 1646 the garrison surrendered, but only after a direct command from Charles I. Parliament ordered the castle destroyed so it could never be held against them again, but fate took a hand; plague broke out in Newark town, and the destruction of the castle was halted.

After the Restoration of the monarchy in 1660 the castle was held by Queen Henrietta Maria, Charles I's widow. Colonel Thomas Howard tried twice to get the lease so that he could quarry the castle for building stone, but thankfully he was rebuffed. Then in the early 18th century the castle site was leased to the Duchess of Newcastle. The family held the estates until 1836, when all the crown land was sold except for the castle. 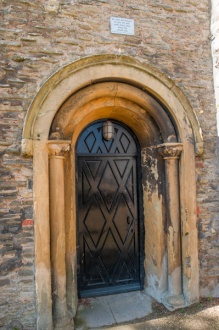 Entrance to the Heritage Centre

During the 19th century the castle was used for a variety of purposes; a cattle market was held within the castle grounds, and a public baths built in once corner of the site. In 1881 a public library was built within the grounds.

This is now the Gilstrap Heritage Centre. Finally the castle grounds were turned into a public garden to commemorate Queen Victoria's Jubilee in 1889. The Victorian gardens have now been restored, and as a result visitors can freely wander the castle grounds from dawn until dusk, and look out the 16th century windows in the curtain wall for wonderful views along the River Trent.

Due to the Civil War destruction only one and a half sides of the castle still stand - enough to give an idea how impressive the original fortress must have been. The west front, facing onto the river, has survived almost complete.

At the southwest end is a low Norman tower, reputedly the place where King John breathed his last. Halfway along the river frontage is a small projecting tower, bult in 1346 by Bishop Henry de Burghersh. The hall has disappeared, but the hall's undercroft still exists, cut deep into the ground, with a postern passage through the curtain wall to the riverside. 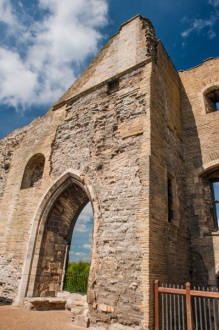 At the northwest corner is a large hexagonal tower with a bottle dungeon cut into the rock at its base. The largest tower is on the north side, where Bishop Alexander's original gatehouse still stands.

The gatehouse was not simply a passage inside the walls; it offered the major accommodation chambers, for unlike many contemporary castles there was no central stone keep at Newark, just an encircling wall punctuated with strong towers. Though the gatehouse is largely a shell, it is a vey impressive shell at that!

The main features of the castle are the gatehouse, castle dungeons, the curtain wall, and the southwest tower. There are regular guided tours of the dungeons and towers, but at other times these areas are locked, which seems a real shame. The heritage centre is open daily and there are frequent outdoor events within the castle grounds, including open-air concerts.

From the riverside the bulk of Newark Castle looks extremely impressive, looming above the water like a forbidding barrier. It is only when you approach from the town that you realise how 'one-sided' the structure is. For on the town side, there are almost no remaining walls, though the towers are still impressive.

It honestly does not take long to explore the castle site. The corner towers are usually locked, except for arranged tours, and you can explore the ruins in 10 minutes. That's not to say it isn't impressive; it certainly is, and the information panels help a lot to get a clear picture of what the original castle looked like.

There is an extremely good sculpted model of the castle and town, showing all the major historic sites, and this is extremely helpful in placing the castle in context with the town, and seeing what the medieval fortress was like.

Note: Do not confuse this Newark Castle with the similarly named property in New Glasgow, Scotland. 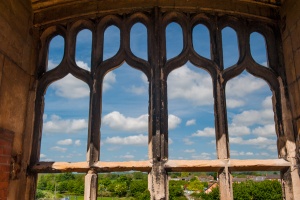 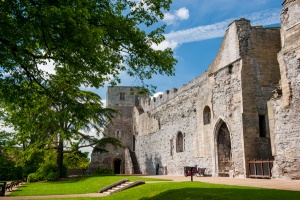 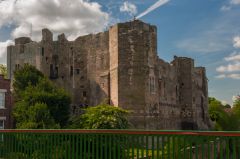 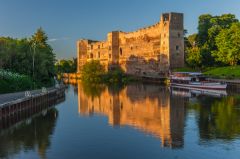 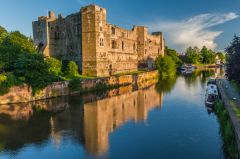 More self catering near Newark Castle >>