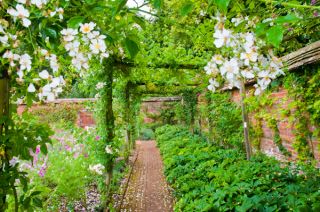 A small village near the Dorset border with Wiltshire. Cranborne boasts a marvellous 13th-century church. The village once sat amid the royal forest of Cranborne Chase, now long gone. Many monarchs came to Cranborne while hunting in the forest, and James I and his son Charles I are known to have stayed at the Cranborne Manor here. Though the manor is not open for visitors, the manor gardens can be visited on specified days.

Cranborne is a tidy, peaceful village today, centred around Cranborne Manor and the lovely historic church. However, in the medieval period, Cranborne was a bustling market town and gave its name to the royal hunting ground of Cranborne Chase.

Thomas Hardy based his mythical town of Chaseborough on Cranborne, and used the Fleur de Lys inn as the model for his Flower-de-Luce in Tess of the D'Urbervilles. Hardy was rather uncomplimentary of Cranborne, calling it, 'a decayed market town', which seems rather cruel, as it is actually a quite attractive little place, set in lovely countryside.

The prosperity of Cranborne dates to the late 10th century when a Benedictine abbey was established here in 980 by Aylward the Fair (Aylward Snaew). The abbey may have been built on the site of an earlier Saxon minster. In 1102 monks from Tewkesbury came to Cranborne to build a new abbey based around an imposing abbey church. Cranborne thus became a priory and cell of Tewkesbury Abbey, a status it retained until 1540 when the abbey was dissolved.

Cranborne stood on the main coaching route between Poole and Salisbury, and the manor house served as the base for the Chase Courts, administering justice for the whole of Cranborne Chase.

In the mid-18th-century new turnpike roads were built from Salisbury to Blandford, which diverted traffic from Cranborne, and as a result, the busy market town dwindled down into the lovely little village we see today.

The manor at Cranborne is based on a former royal hunting lodge built by King John in 1207, making it one of the oldest surviving houses in England. The manor house is surrounded by lovely gardens which are regularly open to the public. The manor house stands beside the parish church, which includes a carved 15th-century pulpit and the tomb of Edward Stillingfleet, Bishop of Worcester.

More self catering near Cranborne >>

More bed and breakfasts near Cranborne >>