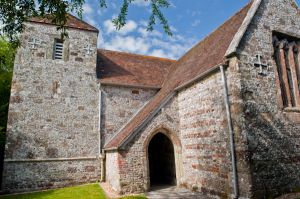 A small village in the Tarrant Valley, Tarrant Rushton boasts an unusual cruciform church, built in the 12th century. It is also home to RAF Tarrant Rushton, an airfield used in WWII for glider operations.

The RAF base opened in 1943 and was used for glider missions during the war, most notably the Horsa glider mission on D-Day, when the glider crew were the first Allied personnel to land in France. The base was converted to civilian operations after the war ended and closed in 1947.

It was almost immediately reopened with Flight Refuelling Ltd as a tenant. The firm was heavily involved in the Berlin airlift, with over 4500 missions by the end of August 1949. The airfield finally closed for good in 1980. A memorial to those who served at Tarrant Rushton stands by the roadside, near one of the old hangars.

The delightful flint and stone parish church dates to the Norman period. The nave is 12th century, but the chancel was rebuilt in the 14th century when the west tower was added. Several 13th-century coffin lids have been incorporated into the stonework and churchyard wall. There is a 14th-century piscina and memorials to the Lawrence family, including Richard Lawrence, rector in 1765.

There is thought to have been a leper hospital in the chantry connected to the body of the church during the medieval period. A leper window in the wall of the church can still be seen.

Other historic places in the village include the late 18th-century bridge across the River Tarrant, and Rushton Mill, a water=powered corn mill built around 1800 and in use until 1920. There are several 17th and 18th-century cob and thatch cottages.

About 50 yards north-west of the church are the earthwork remains of a moated site. For many years this was thought to be the location of a chapel dedicated to St Leonard, but recent research shows that it was instead the site of Rushton Manor house, set on a moated island bounded on one side by the River Tarrant and on the other sides by a ditch, some 40 feet wide and 4 feet deep. 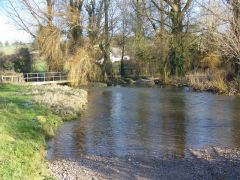 More self catering near Tarrant Rushton >>