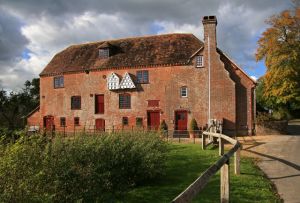 White Mill
White Mill is a restored 18th-century corn mill on the banks of the River Stour, which still retains its original machinery made from elm and apple wood. Though the wooden machinery is too fragile to be used, it has been restored to its original state.

The mill was built in 1776 on the site of a mill that had stood at the time of the Domesday Book. The mill ran on water power until 1866, when a severe flood damaged the water channels beyond repair That was the end to commercial milling on the site, but the miler converted half of the mill to run on a steam engine so he could grind flour to bake bread. In the early 20th century the mill fell out of use completely, and it was not restored until 1994.

Perhaps 'restored' is the wrong word to use, for the wooden milling machinery is simply too delicate to be used for grinding grain, so what the National Trust have done is simply conserve the building so that visitors can see how the mill worked. Most of the mill is of brick, save for the wheel chamber, carefully crafted of stone in the 14th century.

There are also 14th-century timbers in the foundations, suggesting that the mill as we see it today is simply the current iteration of a building that has been updated, rebuilt, and restored for as much as a millennium. There was almost certainly a mill here in 1175, and the Domesday Book of 1086 lists 8 mills in the manor, though we cannot be certain that White Mill was one of the 8!

Why is it called 'White Mill'?

The short answer is that we don't know, but it may be because there is a chalk pit behind the mill, or perhaps because the original timber mill was lime-washed.

Beside the mill itself stands the original mill cottage, and a short distance away is the ancient multi-arched Whitemill Bridge across the Stour. The bridge is 16th century, but it stands on timber pilings dating to the 12th century.

White Mill is part of the National Trust's Kingston Lacy estate, and admission is by guided tour only.

More self catering near White Mill >>