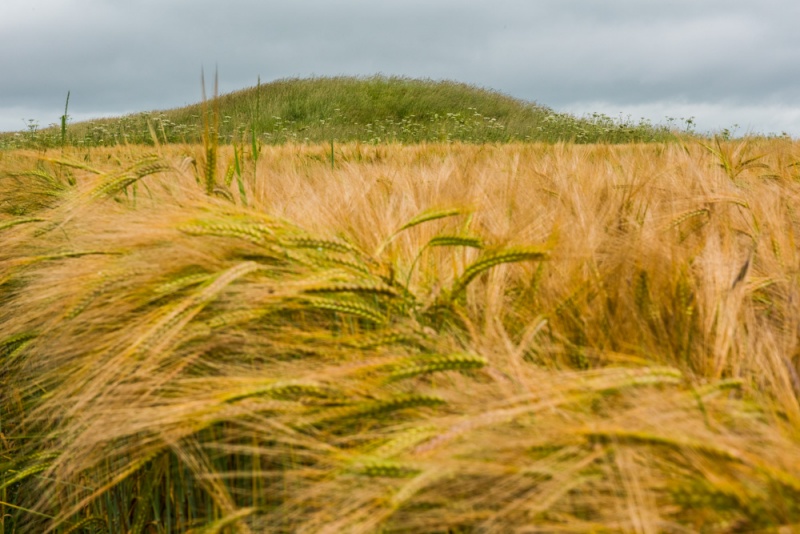 A long barrow that really is *long*! Pimperne barrow stretches to 330 feet in length, rises to 10 feet high, and is about 90 feet wide at its widest point. The barrow can be roughly dated to 3500-4000 BC.

The long earthen mound was built to cover a communal burial site built of timber and was flanked by a set of parallel side-ditches, though these have now silted up and are very hard to make out. The shape of the barrow is parallel-sided, like a long rectangle, in common with many other Dorset barrows, unlike the tapered barrows you will see elsewhere in the south-west.

The inner burial chamber has never been fully excavated, so we don't know how many burials took place here or if people were buried with grave goods. We do know that there must have been a sizeable community nearby, as traces of huts have been found, and there are numerous burial mounds in the area.

The barrow is on a public bridleway approximately 1000 yards (300m) north of the A354. Access is easy, but there are no signposts so you do need to know where you are going. Immediately east of Pimperne village, the A354 rises in a long, steep hill. At the top of the hill, almost opposite a memorial, is a long layby.

There is another layby on the other side of the road, slightly east. From the north side of the road (eastbound) a bridleway leads along the field boundary, and you can clearly see the bulk of Pimperne barrow in the distance. It is somewhat disconcerting approaching from this direction, for all you see is the southernmost end of the barrow, and it honestly does not look very big. It is only when you get close that you realise you are seeing the width of the

It is somewhat disconcerting approaching from this direction, for all you see is the southernmost end of the barrow, and it honestly does not look very big. It is only when you get close that you realise you are seeing the width of the barrow, not its length, and the actual barrow mound stretches away from you into the distance. From the layby to the barrow takes 10 minutes at most, and the going is level.

If you have time and would like a longer walk there is a footpath from Pimperne village, off Down Road, which leads uphill from the south-west.

There are no information panels to explain the site. You can climb the barrow in several places, and when you stand on top of the mound and look along its length the sheer scale of the site hits you; Pimperne is very impressive! Since there are no obvious burial chambers and no access to the mound interior it won't take long to explore the mound, but it is worth a visit if only to marvel and the size of the mound and the wonderful rural location. 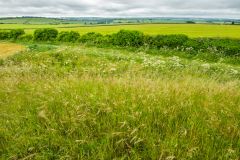 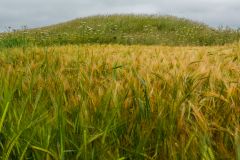