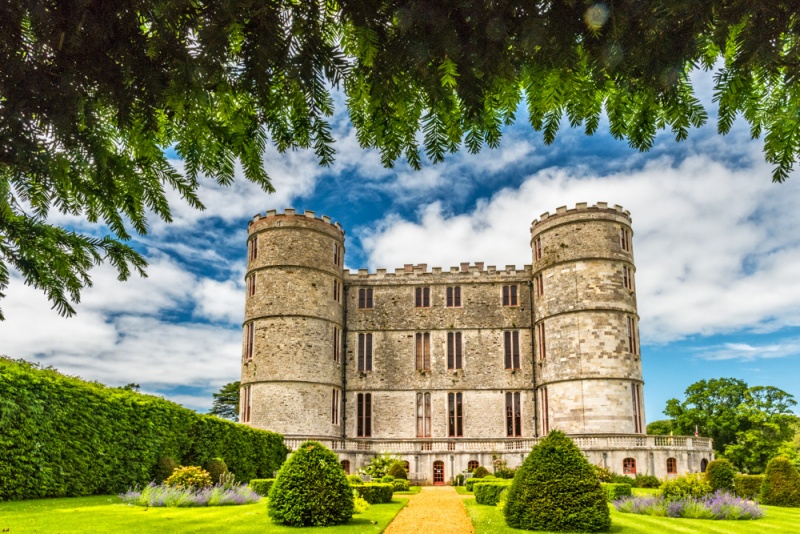 Lulworth Castle was begun in 1608 as a hunting lodge by Thomas Howard, 3rd Viscount Blindon and youngest son of the Duke of Norfolk. Howard was a favourite of James I, and it is rumoured that he hoped to build a grand lodge modelled on a medieval castle so that he could invite the king to come hunting on the Isle of Purbeck. The king finally did visit Lulworth in 1615, but by that time Thomas Howard was dead and the estate was owned by his cousin the Earl of Suffolk. 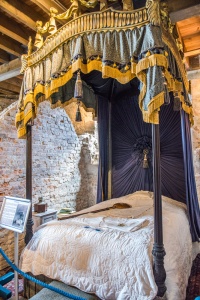 In 1641 the estate of Lulworth was purchased by Humphrey Weld, son of a wealthy London merchant, and the Weld family has lived there ever since. Sir Humphrey supported the Royalist cause in the Civil War and Lulworth Castle was occupied by Parliamentarians. They stripped lead from the castle roof and sold it to make musket balls to besiege Corfe Castle.

After the Civil War ended Sir Humphrey was rewarded for his loyalty to the crown by becoming Governor of Sandisfoot Castle and Portland. Charles II visited Lulworth in 1665, and the cost of the monarch's stay nearly bankrupt the Welds. Worse was to come, for the Welds were staunch Catholics, and anti-Catholic legislation deprived him of all his official positions so that when he died in 1685 he had almost no money to pass on to his heir.

One of the most fascinating Welds of Lulworth was Sir Edward Weld (1705-1761). Sir Edward married young, to Catherine, daughter of Lord Aston of Forfar. The couple soon separated, and in a sensational court case Catherine sued for divorce on the grounds that the marriage had not been consummated. She lost her case and Sir Edward sued for libel. He won the case but was not legally allowed to marry until Catherine died.

In 1745 feelings against Catholics were running high as Bonnie Prince Charlie launched his ultimately unsuccessful bid for the throne. Weld's enemies 'discovered' a letter implicating him the the Jacobite plot, and he was incarcerated. The letter was quickly proven to be a forgery, and Sir Edward was freed. 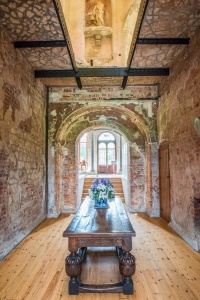 His heir, also named Edward, married twice, the second time to Mary-Ann Smythe. He died shortly after, and she married Thomas Fitzherbert. After her second husband also died, the twice-widowed Mary-Ann became the mistress of the Prince of Wales, and very probably was secretly married to him.

During the 18th and 19th centuries the interior of the house was remodeled several times, turning it into an ornate country home in the fashionable Palladian style.

The exteror of the castle is plain, and bereft of decorative touches, as befits a mock medieval castle. The round towers at the corners of the straightforward square building rise to four stories, providing excellent views of the surrounding countryside and coast.

On 29 August 1929, a maid discovered that a fire had broken out in the northeast tower. There seemed little danger, but efforts to stop the fire's spread were ineffective and molten lead from the room ignited the floors below.

Fire crews were minutes from subduing the flames when the water supply ran out, and efforts quickly turned to saving as much of the interior contents as possible. A group of girl guides camping in the castle grounds pitched in and help remove paintings and books before the fire drove them out. When the flames finally died out after 3 days Lulworth Castle was a roofless ruin. 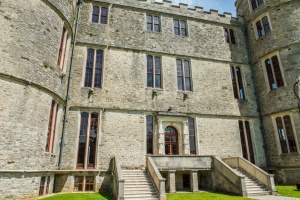 Lulworth Castle was gutted by fire in 1929, but in the 1970s an ambitious rebuilding plan took place with the aid of English Heritage, allowing the exterior of the castle to be restored to the condition it enjoyed the day before the fire. The restoration project has been the recipient of an award from the Royal Institute of Chartered Surveyors for excellence in building conservation.

In the grounds of Lulworth Castle is the Catholic Church of St. Mary, built in 1786 as a family chapel. According to Weld family legend, they were only allowed to build the church if it did not look like a church! So they built a domed neo-classical structure that looks much like the allegorical temples much in vogue during the late 18th century. Within the church are four half-domed apsidal wings and a marble altar brought from Rome.

Lulworth Castle is well signposted from surrounding roads. There is a paid parking area giving access to the castle, parish church, chapel, and grounds. The location is wonderful, though you are likely to find the peace disturbed by the sound of gunfire from the MMOD lands opposite the castle. When we visited the sound of gunfire was a constant backdrop.

The castle is extraordinary to experience. From the outside, it looks picture-perfect, a wonderful example of a Victorian mansion in mock-Gothic style. But when you enter the castle you find the interior is bare, with modern metal beams supporting the exterior shell. You move through empty rooms that echo to your footsteps.

Very few interior decorations remain beyond a few carved details surrounding fireplaces. You can climb to the top of one tower for superb views over the castle and grounds. You can also descend to the cellars, which thankfully escaped the worst of the fire. There is a very touching exhibit about the fire and a beautifully restored kitchen area.

Do take the time to explore the nearby chapel; its an exceptional example of 18th-century architecture, furnished in opulent style. On the opposite side of the castle from the chapel is the medieval Anglican church of St Andrew. 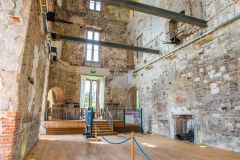 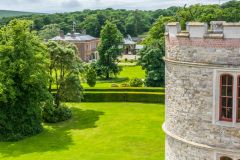 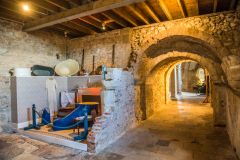 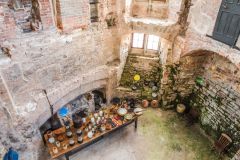 More self catering near Lulworth Castle