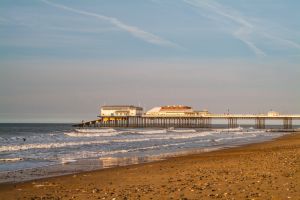 A popular seaside resort town on the north Norfolk coast, Cromer offers all the delights of a traditional holiday by the sea. There are walks along the coast, and plenty of sandy beaches for families to enjoy. Cromer is famous as a centre for crab fishing, and Cromer crabs can still be purchased fresh from the sea.

We do not know when the town began; it was not mentioned in the Domesday Book of 1086 and the first written record does not occur until 1262. Even the origin of the town name is a subject of debate; it could mean a gap in the cliffs or perhaps come from the medieval terms for a crow's mere. By 1337 the area near the parish church was known as Shipden-juxta-Felbrigg, and it was not until the late 14th century that the name 'Cromer' was used.

The real story of Cromer begins in the early years of the 19th century when Cromer became popular amongst the wealthier citizens of Norwich as a summer resort. That popularity was enhanced by the writings of a journalist named Clement Scott who wrote a series of widely-read articles about the area, which he called Poppyland. The combination of Scott's writing and the advent of the railway made Cromer incredibly popular as a resort.

Much of the architecture dates from the late Victorian and Edwardian period. There is a traditional seaside amusement pier which has a popular show.

The medieval church of St Peter and St Paul has a tall tower that served as the local lighthouse until well into the 18th century. Though the church dates to the 14th century it was completely rebuilt in the late Victorian period by architect Arthur Blomfield. Interior highlights include large stained glass windows with panels depicting the history of the Cromer lifeboat crew.

Other interesting historic buildings include Cromer Hall, a Gothic Revival mansion built in 1829 and later a family home of the wealthy Baring family of bankers. Then there is the Hotel de Paris, built by Lord Suffield in 1820 by and remodelled by George Skinner, who also designed the imposing old Town Hall in 1890.

Beside the church is the Cromer Museum, housed partly in an old fisherman's cottage. Beside the pier is a museum dedicated to the RNLI Cromer Lifeboat service. Learn the story of Henry Blogg, a remarkably brave member of the lifeboat team who received 3 gold medals for heroism and 4 silver medals.

The Elizabethan manor of Felbrigge Hall is just two miles outside Cromer. 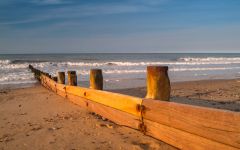 More self catering near Cromer >>

More bed and breakfasts near Cromer >> 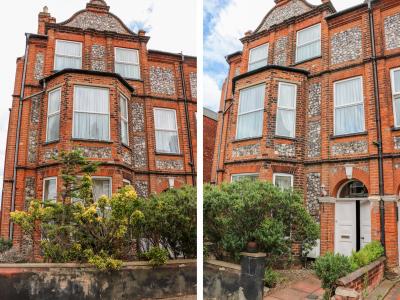 This three-storey cottage rests in Cromer in Norfolk and can sleep 18 people in nine bedrooms.
Sleeps 18 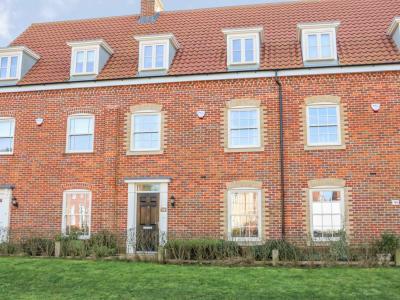