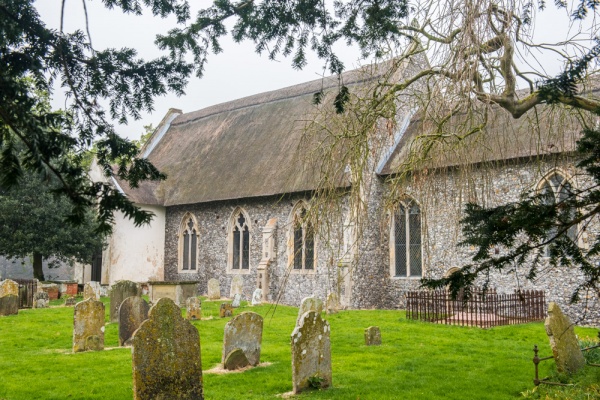 "At Thurgarton Church the sun burns the winter clouds over the gaunt Danish stone and thatched reeds that cover the barest chapel I know". So write Norfolk poet George Baker. Baker's description was coloured by his emotions, as the poem was written in memory of his deceased father, but there is something a bit daunting about Thurgarton church, located in a seemingly remote and isolated countryside setting. 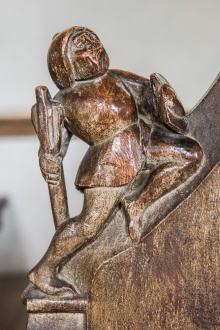 This thatched church is primarily a product of the 14th century and is worth visiting in particular for its collection of medieval benches, which feature very nicely carved ends. The carvings cover such a multitude of subjects, only some of them vaguely religious.

Here you will find figures of strange beasts, winged figures, fighting dogs, a creeping hunter, dragons, a musician, and what appears to be an elephant and castle. A similar elephant design appears at churches in South Burlingham and South Lopham. Perhaps they were carved by the same craftsman.

Another bench end depicts a barrel, or tun, a pun on the village name. One humorous bench end shows a lion creeping up on a man playing a lute. The vitality of the carvings is superb; they really evoke a sense of medieval life and attitudes.

There are several other interesting bits and bobs about the church, including a section of 16th-century painting showing scriptural text, and a plain medieval font.

He was a Father to the Fatherless
He helped the widows in their Distress
He never was given to worldly Pride
He lived an honest man and so he dy'd
They was tender parents our Loss was great
We hope that both eternal Joys will meet.

The timber roof appears to be original, though it is supported on remarkably slender timbers. The hammer-beam roof in the roof was rebuilt in the 17th century. The font is plainly carved and probably dates to the 14th century. The wooden cover, topped by a finial in the shape of an acorn, is from around 1700. In the north-west corner of the church is a 15th-century parish chest which is protected by three locks.

At the north-east corner of the nave is a complete rood stair, retaining its medieval hinges. The medieval rood screen was sold in 1897 to raise funds for restoring the church. It was replaced with the current screen, carved by rector Edwin Sandys-Reed in the same style as the original. Behind the pulpit is a late 18th-century Commandment board.

Unusually for Norfolk churches, there is no tower. The original tower collapsed in the late 19th century and was rebuilt as the vestry.

All Saints church is no longer used for regular worship and is in the care of the Churches Conservation Trust. It is usually open during daylight hours. 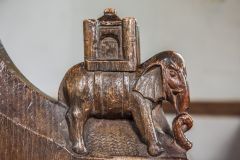 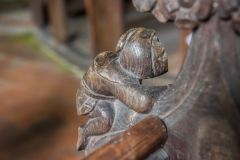 More self catering near Thurgarton, All Saints Church >>

More bed and breakfasts near Thurgarton, All Saints Church >>