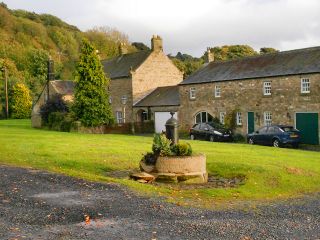 Wall
Wall is a small village near Hexham, in northern Northumberland, and takes its name, as you might guess, from nearby Hadrian's Wall.

The village stands near the site of the Battle of Heavenfield, where a Welsh army under Cadwallon ap Cadfan attacked a force under Oswald, King of Bernicia, part of the Northumbrian kingdom. The armies met around AD 633 and the result was a decisive victory for Oswald. As a consequence of his victory, Oswald was able to - at least briefly - unite the Northumbrian kingdoms of Bernicia and Deira under his rule.

A settlement grew up at Heavenfield, with its own church. The villagers of Wall had to walk the 1.5 miles to worship at Heavenfield until 1896, when the Victorian church of St George was built on the village green, replacing an earlier cottage thatched with heather.

In the centre of the village is The Hadrian Inn, a 19th-century ivy-clad hotel. The hotel stands in a conservation area, maintaining the heritage feel of the village and its traditional Northumbrian style of buildings.

Several interesting sections of Hadrian's Wall run close to the village. Just to the north is Brunton Turret, and to the northwest is a milecastle. A mile away, over the River North Tyne, lies Chesters Roman Fort, one of the most complete forts along the course of the Wall. Beside the fort is a wonderfully picturesque walled garden.

More self catering near Wall >>

More bed and breakfasts near Wall >>